Chief of staff, defense minister say will not allow cuts to affect basic rights of soldiers in permanent service, following plan to cut IDF personnel by some 4,500 officers, NCOs

In a ceremony at the The Monument for Fallen Bedouin Soldiers, IDF Chief of Staff Benny Gantz addressed cuts to the defense budget, saying "I've approved a plan that will unfortunately lead to the departure of many people... but I won't allow the basic rights of officers and NCOs to be affected," Gantz said.

Gantz praised officers and NCOs in the ceremony: "You serve proudly... regardless of what you get in return."

Gantz compared the state of officers and NCOs to that of civil workers, saying: "You are workers who have no union, no tenure, and no right to unite. This is how we worked through the years and this is how we will keep on working." 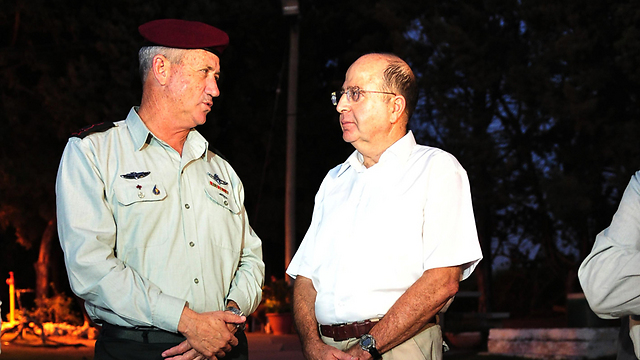 The chief of staff stressed that "Any disrespect to officers and NCOs is equivalent to injuring Israeli security. We have no army to hire, and we would never win a fight without your firm endurance throughout the years."

Ynet's Ron Ben-Yishai said that tomorrow, a Cabinet meeting that has to do with the security budget will take place, and in it Gantz is expected to ask to reduce the cut from NIS 7.5 billion ($2.13 billion) – the sum decided in a Cabinet meeting in May – to NIS 4 billion ($1.1 billion).

Gantz is expected to explain to the Cabinet that the cuts will severely hurt IDF's training ability and war preparedness. The IDF warned that the steep cut will make it difficult for it to perform tasks effectively.

Defense Minister Moshe Ya'alon also spoke at the ceremony, saying, "In recent months we've faced pivotal strategic considerations that forced us to make painful moves. We will know to do this with responsibility and good judgment while preserving our security assets," he said.

Ya'alon lashed out against the Finance Ministry Monday during a turbulent debate at the Labor and Welfare Committee meeting. "The (Finance) Ministry is taking advantage of the public atmosphere, according to which we can hurt officers and NCOs," Ya'alon said, adding, "In the coming hearing regarding the security budget, the Finance Ministry will demand cuts in personnel for 4,500 soldiers in permanent service and there won't be nearly as much public outrage as there was when 800 Teva workers were threatened with layoffs."

On Monday, Yedioth Ahronoth reporter Yossi Yehoshua revealed that the defense minister ordered a large layoff plan in the IDF under which 4,500 officers and NCOs will be discharged.

According to the plan, the layoff process will be over by the end of the first quarter of 2015, meaning thousands of military personnel will be in the work market by next year.