International relations minister says it was agreed with Palestinians to reduce engagement with Israel, but not completely cut ties. 'Palestinian struggle is our struggle; last time I saw map of Palestine, I couldn't sleep', minister says

South Africa's International Relations Minister Maite Nkoana-Mashabane said on Friday that the ministers of her administration do no visit Israel in solidarity with the Palestinians. "We have agreed to slow down and curtail senior leadership contact with that regime until things begin to look better," the minister was quoted as saying by local news agency SAPA.

"Our Palestinian friends have never asked us to disengage with Israel (through cutting diplomatic relations). They had asked us in formal meetings to not engage with the regime," said the South African international relations minister in an economic conference in her country.

According to her, the leading organization for the South African Jewish community, the Jewish Board of Deputies, "knows why our ministers are not going to Israel". The minister noted that "the struggle of the people of Palestine is our struggle." She added that South Africa had a Palestinian embassy, which was supported "100%". 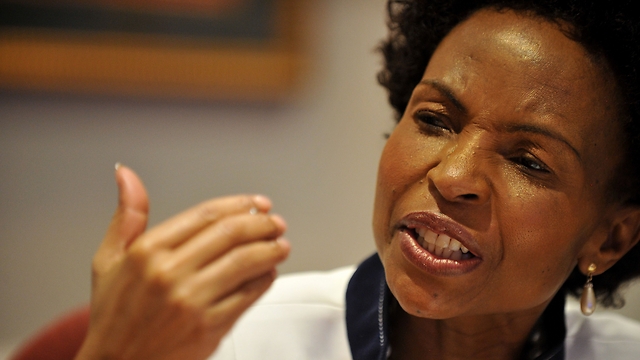 "The last time I saw a map of Palestine, I couldn't go to sleep," the minister said. "It is just dots, smaller than those of the homelands, and that broke my heart." The meaning of "homelands" refers to "the Bantustans" – ten states set aside by the apartheid regime in South Africa for the black inhabitants.

South Africa is considered a fierce critic of Israel, but so far has not untied diplomatic relations. Last June, recently retired South African Ambassador to Israel Ismail Coovadia issued a letter to pro-Palestinian activists noting that the Israel discriminates the Palestinians in a manner that is reminiscent of the apartheid era.

Activists recently chose to launch an international campaign in South Africa that demands to release of 5,000 political Palestinian prisoners from Israel, including Marwan Barghouti. The campaign was launched October 25 in Robben Island, where former President Nelson Mandela spent 18 of his 27 years in prison.