Woman, husband sustain light to moderate wounds after Molotov cocktail hurled at their vehicle in Gush Etzion. Earlier, Palestinian who tried to stab soldier was shot to death by troops near Jerusalem

A woman and her husband were wounded after a Molotov cocktail was hurled at their vehicle near Tekoa in Gush Etzion on Friday. The woman sustained light to moderate wounds while the man was lightly injured. They were treated at the scene and then taken to the Hadassah Ein Kerem Hospital in Jerusalem. The vehicle was burned down.

The incident was the latest in a string of incidents in the West Bank.

Zachi Khouri recounted, "What basically happened was that there was a giant explosion, we didn't understand what was going on. It took me a second to realize that my wife was on fire. The car started to burn. I opened the door, pulled her to me. I tried calling rescue services, there was no reception. It took me a long time until I could reach someone.

Local residents are planning to demonstrate in protest of the decline in security in the area.

On Thursday, a Palestinian in his twenties was shot to death after trying to stab a soldier at a checkpoint in Abu Dis, west of Jerusalem. Troops were conducting a security check on a vehicle suspected of carrying drugs at the time. 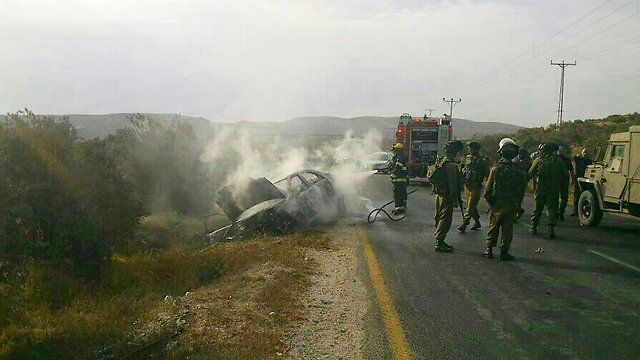 The Palestinian did not heed the soldiers' call to stop and one of the combatants opened fire, inflicting serious wounds. Paramedics who treated the man were forced to pronounce him dead.

The incident occurred just hours after troops opened fire at a Palestinian who shot an improvised weapon at Israelis standing at a bus stop in Tapuach Junction in the West Bank.

The shooter was killed on scene. Police sappers searched the body for explosives. No Israelis were hurt in the incident.

A statement from the Israeli army said that "a Palestinian opened fire at a civilian bus stop at Tapuah Junction near Ariel, using an improvised weapon."

"In order to prevent casualties, IDF soldiers in the area opened fire towards the terrorist. A hit was identified," read the statement.

A high ranking IDF officer said that no advance warning was given for the attack, and that the Palestinian, shot and killed by soldiers, was 29-years-old and "to my understanding, was acting alone."