Kerry: US 'not blind, stupid' in nuclear talks with Iran

In hinted response to Israeli criticism of looming deal between Iran, western powers, John Kerry says US 'not stupid' while PM says Israel has right to defend itself, revealing tensions between two allies

The United States is "not blind, and I don't think we're stupid" in nuclear talks with Iran, US Secretary of State John Kerry said in a television interview that aired Sunday.

While Prime Minister Benjamin Netanyahu reiterated that "We have the right and the duty to protect our existence ourselves," the top US diplomat insisted there is "zero gap" between the Obama administration and its commitment to Israel, with diplomatic relations between the two allies under strain over the Iran nuclear talks

Netanyahu commented on the Iranian issue while speaking at a ceremony marking 40 years to the passing of Israel's founder and first Prime Minister David Ben Gurion, and said: "We have the right and the duty to protect our existence ourselves. I will respond with a fierce and painful counter attack to those who wish to put our security to the test." Earlier Sunday, at the cabinet meeting, Netanyahu claimed he expressed his reserve from Iran's agreement with the United States, Russia, France, Germany and Britain over the weekend as world powers failed to reach an agreement with Iran.

"I told them that according to the information Israel has, the impending deal is bad and dangerous. Not just for us but for them too." He further added, "I asked them what was the rush and I suggested that they wait and consider the matter seriously.

"The deal at once lifts the pressure of sanctions which have taken years to put in place, and leaves Iran with its nuclear and enrichment capabilities intact. Not one centrifuge is to be dismantled. These are historic decisions. I asked that they wait and I'm pleased they have decided (to do) so." 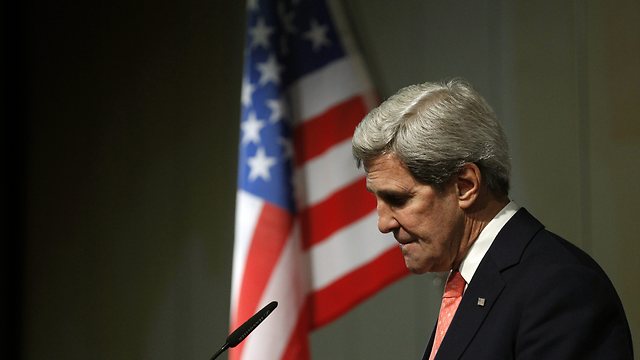 "We are not blind, and I don't think we're stupid. I think we have a pretty strong sense of how to measure whether or not we are acting in the interests of our country and of the globe," Kerry said on NBC's "Meet the Press."

Kerry also said the United States continues to be skeptical of Iran's willingness to dismantle its nuclear program and will keep sanctions in place as talks continue.

The United States and its allies narrowed their differences with Tehran in talks over the weekend, but were not able to reach a deal as France believed the proposal did not adequately neutralize the risk of an Iranian atom bomb.

When asked about Prime Minister Benjamin Netanyahu's harsh criticism of the deal between Iran and western powers, Kerry said "I'm not sure that the Prime Minister, who I have great respect for, knows exactly what the amount, or the terms are going to be, because we haven't arrived at them all yet. That's what we're negotiating. And it is not a partial deal."

Kerry added that "We are absolutely determined that this would be a good deal or there will be no deal... that's why we didn't close the deal here... because were are together unified pushing for the things we believe provide the guarantees Israel and the rest of the world demand here.

One thing is clear: We are not going into a full, deal and giving away something, we are talking about stopping their program where it is with enough grantees to know that it is in fact stopped where it is while we then negotiate the full measure of the deal... with all interested parties."

Kerry concluded that "It seems to me that Israel is far safer if you make certain that Iran cannot continue the program."

Israel has also voiced skepticism, warning that the Iran cannot be trusted until it dismantles its nuclear program.

Kerry said the United States is aiming to get Tehran to halt further nuclear development as a first step toward a complete dismantling of the program. Washington will keep sanctions in place in the meantime, he said.

"Nobody has talked about getting rid of the current architecture of sanctions. The pressure will remain," he said.

Earlier on Sunday, Iran's president Hassan Rohani said that its "rights to enrichment" of uranium were "red lines" that would not be crossed and that the Islamic Republic had acted rationally and tactfully during nuclear negotiations, Iranian media reported.

"We have said to the negotiating sides that we will not answer to any threat, sanction, humiliation or discrimination. The Islamic Republic has not and will not bow its head to threats from any authority," he said during a speech at the National Assembly, Iran's student news agency (ISNA) said.

"For us there are red lines that cannot be crossed. National interests are our red lines that include our rights under the framework of international regulations and (uranium) enrichment in Iran."

On Saturday, Iran and six world powers failed in talks to clinch a deal to curb Tehran's nuclear program but said differences had narrowed and they would resume negotiations in 10 days to try to end the decade-old standoff.

Talks are set to resume in Geneva on November 20.

Reuters and the AFP contributed to this report