Netanyahu: I pledge Iran will not get nuclear weapon

Prime Minister Benjamin Netanyahu on Thursday pledged Israel would never allow Iran to obtain a nuclear weapon, as world powers sought a deal with Tehran in Geneva over its nuclear drive.

"I pledge Iran will not get a nuclear weapon," Netanyahu, who has never ruled out military action against Tehran, said in a speech to leaders of Russia's Jewish community in Moscow.

Earlier, Netanyahu warned world powers negotiating with Iran that an anti-Israel speech by Iran's supreme leader gave fresh proof over why Tehran must not acquire a nuclear weapon.

Speaking to leaders of Russia's Jewish community on the second day of a visit to Moscow to campaign against an emerging world power deal with Iran, Netanyahu accused Supreme Leader Ayatollah Ali Khamenei of using the lexicon of the Nazi Holocaust. 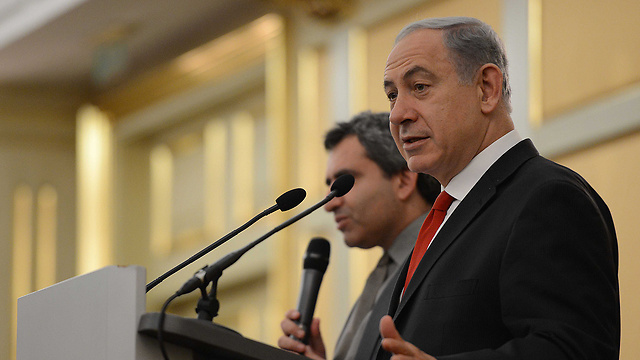 "Yesterday, Iran's supreme leader, Khamenei, said 'death to America, death to Israel', he said that Jews are not human beings."

Khamenei told militia commanders in Tehran on Wednesday that Israel, Iran's arch-foe, was "doomed to collapse", "the rabid dog" of the Middle East, and with leaders "not worthy" of being called "human".

"Such an Iran must not get a nuclear weapon," Netanyahu said.

He later pledged that "Iran will not get a nuclear weapon."

After talks with Russian President Vladimir Putin on Wednesday, Netanyahu on Wednesday insisted on the need for a "real" solution to the Iranian nuclear crisis.

Netanyahu's speech in Moscow came as Iran and world powers were set Thursday to begin hammering out a landmark deal freezing parts of Tehran's atomic program to ease fears of the Islamic republic obtaining nuclear weapons.