The Israeli political-security establishment is increasingly concerned at what seems to be an American desire to reach a deal with Iran regardless of the price. To make matters worse, even those who oppose publically clashing with the Americans say that de facto, contact between the policy makers in Obama's White House and Jerusalem has been effectively cut off.

There are of course formal communications between Washington and Israeli leaders, but Israeli officials believe that in the situation born out of the post-Geneva agreement, Israel has pretty much lost its ability to influence Obama regarding Iran and other international issues.

Finance Minister Yair Lapid said Monday that the US is and remains Israel's most "strategic asset," but some in Jerusalem are singing a different song; they have no problem openly saying that Obama is leading the region towards a catastrophe.

The way things look from Israel now, the assumption is that Obama has fortified himself behind a small and closed ideological circle. This circle believes in partial non-interventionism and has an aversion to international conflicts – not only in the Middle East but also in South East Asia. In regards to Iran, this circle believes in pursuing a permanent deal that allows Iran to reach the nuclear threshold, while containing the nuclear program in such a way that will bar Iran from ever crossing the threshold or attaining a nuclear weapon without the West noticing. 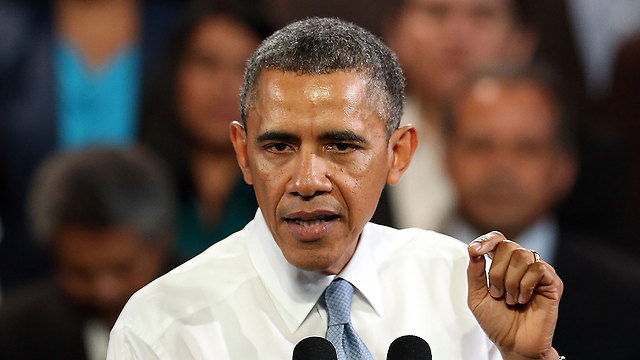 In Israel, officials say that if this outline becomes a reality, then it would be nothing short of a disaster for Israel. It would mean Iran will be three months away from creating the material it needs for a first nuclear bomb.

Nonetheless, officials will admit that as far as they know there has been no real progress in Iran's "arms group" – the group which develops the prototype for the Iran's nuclear centers and then its warheads.

Not the same US

In Israel there are those that believe that Obama's administration is eager – if not to say anxious – to reach an agreement, maybe even more than the Iranians who are suffering because of the massive sanctions enacted against them.

Jerusalem believes that the American desire to reach an agreement originates from Obama's inner circle which wants the administration to survive the next three years without conflict. The prevalent assessment – in both Jerusalem and other Mideast capitals – is that members of Obama's inner circle stem from the left wing of the Democratic Party and believes that the Iraq and Afghanistan have tired the US public from bloodshed, and is thus interested in an administration that will focus on domestic issues like economic and social policy.

So, in an attempt to secure another presidential term for the Democrats in 2016 they want the US to be free of new international entanglements. As a result, Western officials believe, the US has lost its ability to efficiently conduct diplomacy as well as its ability to undertake clandestine operations, like assisting certain groups among the Syrian rebels. Accordingly the US has shifted from the leading regional superpower in the Mideast – as well as most of the world – to a force "leading from behind." In other words, the US has moved aside and now allows other nations to lead the handling of international crises, like the French-led efforts in Libya and Russian management of the Syrian crisis. By the way, not so long ago there were those in Israel who called on the White House to coordinate its positions with Russia in a bid to bring about a viable peace in Syria's civil war. The White House thought well of the idea but for any number of reasons it failed to actualize. The result is now known to everyone: Russian President Vladimir Putin forced Obama into accepting the Russian solution for Syrian chemical disbarment. Nonetheless, Israeli officials note that the deal eventually reached in regards to Syria is positive, and seems to be implemented according to plans. However, the deal offers Syrian President Bashar Assad a new air of legitimacy, proof that the deal is in fact being carried out as agreed.

So what are Israel's demands in regards to a final agreement with Iran?

Jerusalem does not want Iran to remain a hop, scotch, and a leap from nuclear capabilities but rather they want Iran completely stripped of its ability to enrich uranium and to create plutonium. Israel's minimum demand is that any agreement will push Iran's nuclear program at least two or three years back.

Israel's diplomatic-security establishment feels that the current agreement does not take into account the Israeli position, and on the basis of this feeling the Israeli establishment has decided not to compromise on a number of key points and is adamant in its determination to prevent the interim agreement from turning into a permanent one. For example, Israel wants any future and final deal to address the issue of the "arms group." This means that unlike the interim agreement, the final one will set up a number of mechanisms for making sure that the Iranians will not develop a nuclear detonation center nor build warheads or bombs that can be air-dropped. In addition, Israel is demanding that the US pressure Iran into promising it will halt its terror funding activities.

Jerusalem and other Mideast states feel that as a result of the Geneva agreement and the events leading up to it, especially what has been characterized as Iranian President Hassan Rohani and Foreign Minister Javed Zarif's 'charm offensive', Iran managed to pull itself out of international isolation and is now gaining more and more influence in the region.

The most immediate winner of this process is the axis of radical Shiites, which as Iran's proxy are also gaining power at the expense of the Sunni bloc lead by Saudi Arabia, which bridges between Gulf States, Turkey and Egypt.

In addition, the relief in sanctions has led economic forces in Europe and Asia to compete for future arms contracts with Iran. The feeling in Jerusalem is that the dam has been broken and the way for Iran to circumnavigate sanctions in the future has been paved. Even now, the Turkish Finance Ministry has authorized financial interactions with Iran.

From Israel's perspective, all these issues must be addressed in the final comprehensive deal, but decision makers in Jerusalem and army leaders in Tel Aviv are pessimistic, because of what they call Washington's deaf ear.

Obama did invite Netanyahu together with a delegation of Israeli specialists to advise the US on future negations with Iran, and the group has yet to take off to the US, hinting that everything is still supposedly in the open. However the feeling is that when push comes to shove Israel will have to deal with an Iran that is on the US-sanctioned nuclear threshold – at least until Khamenei decides to move forward.

A crisis of confidence of this magnitude has not been felt between the two nations for over two decades, at least since George H. W. Bush suspended US aid because of Prime Minister Yitzhak Shamir's expansive settlement policy.