President Barack Obama marked the end of Hanukkah with not one, but two receptions at the White House on Thursday.

He noted a rare quirk in the calendar that overlapped Thanksgiving and the start of the eight-day Jewish holiday.

At the first gathering, Obama recognized guests who are credited with coming up with some unusual names for the joint holiday, such as "Thanksgivukkah," a combination of Thanksgiving and Hanukkah, and "menurkey," a blend of the words menorah and turkey.

Menorahs were lit at both receptions. The White House said it expected about 500 people at each. 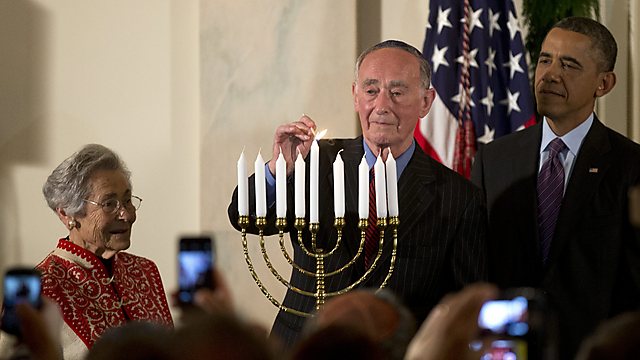 American Jewish leaders and representatives from Israel were among those present at the second event, which was held hours after the world learned that former South African President Nelson Mandela had died.

Obama said Mandela was a "moral giant" who inspired millions worldwide with his dignity, courage and hope.

Among the guests was also Israeli basketball star Omri Casspi – the first Israeli to play at the NBA.

At the second gathering, Obama also touched on two issues of deep importance to the Middle East, Israel's security and the nuclear ambitions of Iran, Israel's nemesis.

He said the US is determined to prevent Iran from obtaining a nuclear weapon and referenced an interim agreement among Iran, the US and five world powers that would freeze parts of Iran's nuclear program in exchange for some relief from stiff economic sanctions. 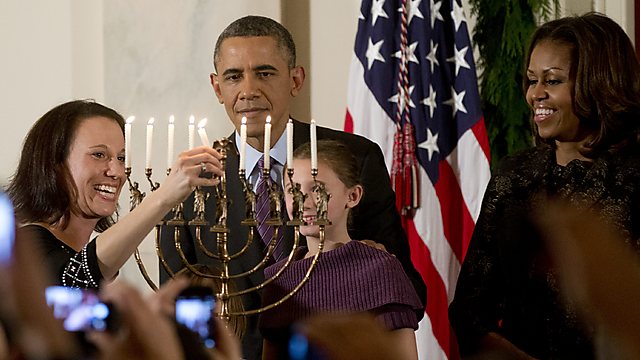 President and First Lady with Drew Schmitter and her daughters (Photo: AP)

The deal, however, has heightened tensions in the region, where leaders worry it could embolden Iran and destabilize the area. Israeli Prime Minister Benjamin Netanyahu is among the agreement's fiercest critics.

Obama said the world powers are "testing" whether it's possible to achieve that goal through diplomacy.

"Over the coming months, we're going to continue our diplomacy with the goal of achieving a comprehensive solution that deals with the threat of Iran's nuclear weapons once and for all," Obama said from the Grand Foyer of the White House. "And through it all, as always, our commitment to Israel and its security will remain ironclad and unshakable."

Last week, Obama sent Hanukkah greetings. "Like the Pilgrims, the Maccabees at the center of the Hanukkah story made tremendous sacrifices so they could practice their religion in peace," he said. "In the face of seemingly insurmountable odds, they reclaimed their historic homeland. "

He further added, "As the first Hanukkah candle is lit, we are reminded that our task is not only to secure the blessing of freedom, but to make the most of that blessing once it is secure.