A rebel commander has frozen to death in the bitter cold brought by a snowstorm that has swept Syria this week, a monitoring group said Saturday.

"The body of a rebel commander who was on his way from (the northwestern province of) Idlib to Homs (in central Syria) has been found. He died during the snowstorm," said the Syrian Observatory for Human Rights.

Observatory director Rami Abdel Rahman told AFP there were no signs of gunshots or other wounds and that the body was "frozen." 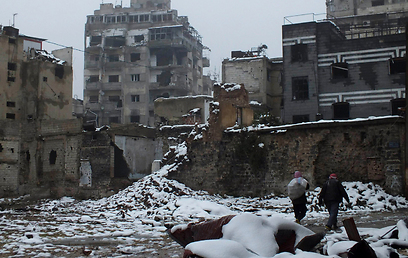 Abdel Rahman said the unnamed commander, in his 40s, was a member of the Islamist Suqur al-Sham brigades.

The Britain-based Observatory also reported that the frozen bodies of two men in their 30s were found in Homs province on a road to neighboring Hama province. It could not say whether they were rebels or civilians.

Syria has been struck by a severe snowstorm that has brought icy temperatures to several countries in the Levant.

Starting Wednesday, the snowstorm brought sudden, low temperatures, below zero in some areas, not only to Syria, but other countries in the region. By Saturday temperatures were starting to improve but several areas were completely covered in snow including Damascus, battle-torn Qalamoun, Aleppo province and Homs.

People living in rebel-held areas, where there are fuel, electricity and food shortages, have been especially affected by the storm, as have been refugees living in tents in neighboring countries.

The main opposition National Coalition reported Thursday that a baby and a child died of cold in Aleppo, northern Syria, and Rastan, in Homs.

Shelter from the storm

The United Nations' humanitarian chief briefly visited Syria Saturday. Valerie Amos said her trip to Syria from Lebanon was delayed because of the storm.

"I have also just been in Lebanon and was able there to talk to the (UN) team about the programs we have been putting in place to help people through the winter," Amos said in brief remarks in the Syrian capital. "Winter is extremely harsh as you can see. I was delayed on my own trip over here."

Amos met with Foreign Minister Walid Moallem, his deputy Faysal Mikdad and Minister of Social Affairs Kinda Shammat before she headed back to Lebanon in the early afternoon.

Shammat said following her meeting with Amos that the two sides have agreed on more cooperation with "international organizations to bring in all aids to all Syrian areas and to those who deserve those aids." She did not elaborate.

The storm, which began on Wednesday, stuck large parts of Syria as well as Lebanon and Jordan where hundreds of thousands of Syrians have fled since the country's crisis began in March 2011. The civil war has left more than 120,000 people dead.

By Saturday afternoon, the weather improved and the skies became clear as the storm, dubbed Alexa, was reaching its end. Despite the clear skies however, temperatures remained near freezing forcing many Syrian refugees in Lebanon to stay in their tents.

In the border Lebanese town of Arsal, which is home to more than 40,000 Syrian refugees, activists distributed dozens of diesel heaters. But there were not enough for everyone.

Show must go on

The icy weather did not stop the fighting on a key front at Adra, east of Damascus. Battles have been raging there for four days, ever since Islamist rebels launched an offensive aimed at capturing one of the main entrances to the capital.

The army hit back with a broad counter-offensive starting Friday, and vowed to "crush" the rebels there.

On Saturday, a security source in Damascus told AFP "the army's operations are continuing. Starting yesterday, we identified the areas where the terrorists are positioned and we are attacking them." President Bashar Assad's regime brands rebels and dissidents as "terrorists."

The source also said a "savage massacre" had been committed in Adra on Wednesday, without specifying a toll.

The Observatory had reported 15 civilians killed Wednesday and Thursday. On Saturday, it said another 12 bodies had been found near Adra, and that "activists have accused the regime of killing them."

Syria's war has killed more than 126,000 people in nearly three years, and forced millions more to flee their homes.