The Jerusalem Magistrates' Court sentenced Rabbi Moti Elon to six months community service after he was found guilty in August in two cases of sexual assault on a minor.

Elon was also sentenced to 15 months probation and must pay NIS 10,000 in compensation to the victim a day after new details were released about his case, revealing the rabbi's behavioral patterns and reinforcing the conviction against him. 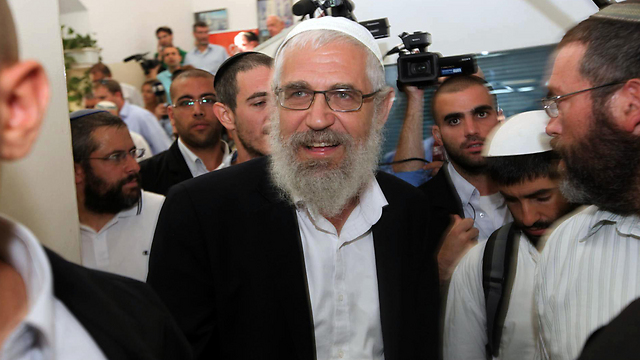 While testifying, R.M, a social worker, recalled how she watched the rabbi kiss and hug a boy in his car. The case is not included in the indictment, but the testimony was found by the court to be reliable and relevant.

As deliberations over Elon's sentence began, Jerusalem District Prosecutor Sagi Ofir announced his support of a 8–18 months term of imprisonment for the convicted rabbi.

Elon's friends and family argued that he should receive community service, and not a prison sentence. They added that regardless of he sentence, the disgraced rabbi will appeal the verdict.

At the time of the trial, R.M. told the court about an event that occurred in September 2001, in which she allegedly saw Elon, who was at the time a director of the Horeb School in Jerusalem, kissing and hugging a minor in his car.

Shocked from what she saw, R.M hurried to document the event in writing as to not forget any detail. A few days after the incident, the witness called her psychologist and consulted with her about the case without revealing Elon's identity, but mentioning that he was a rabbi from religious-Zionist community was involved.

Two weeks later the psychologist called R.M and told her that she summoned the rabbi and his wife for a talk. She said that Elon explained that the boy was upset and that he was merely comforting him.

During her testimony, the witness said that from that moment on, she trusted her psychologist's judgment and that from her perspective the issue was resolved.

Only after media reports emerged detailing the full scope of Elon's actions, did R.M, via a friend, turn to the police and prosecution.

Deputy District Court President Judge Hagit Mack-Kalmanovith accepted her testimony and determined that the witness's reliability can not be challenged, citing the extensive details she provided.

"The detailed description provided by the witness (the document written on pieces of paper on the night of the incident) determined that is not consistent with the possibility that the document is fabricated," said the Judge.

In questioning, Elon denied most of the allegations brought against him.