A rocket fired from the Gaza Strip exploded in a residential area of the Hof Ashkelon Regional Council in southern Israel late Sunday night. There were no injuries reported, but light damage was sustained.

Police sappers located the remnants of the rocket Monday morning.

The rocket fell hours after a bomb was detonated on a bus in Bat Yam, moments after the bus driver safely took all of his passengers off the vehicle. A police sapper was lightly hurt in the blast.

On Sunday, just after midnight, the red alert siren went off in several communities in the southern regional council. Some of the residents in one of the areas reported hearing a large blast.

"I don't want to imagine what would have happened if there would have been children there," one resident said. 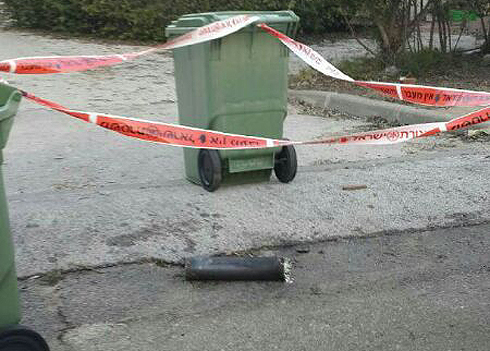 Police officers and the bomb squad unit from Lakhish Region immediately started searching for the rocket, and located it at dawn Monday.

Local residents say they do not remember such a significant blast since the IDF's Gaza operation Pillar of Defense ended in November 2012. And although not all of the residents heard the explosion, the sight of the sappers in the area caused panic.

"We were very lucky that it happened in the middle of the night, when no one's wandering in the streets," a resident said. "It completely caught us by surprise. We have become used to the quiet since Pillar of Defense."

Hof Ashkelon Regional Council Chairman Yair Farjon said the rocket startled the area, but life will go on. "We will continue to be on the lookout, but we will continue with our routine, being sure that the IDF knows how to locate the source of the rockets and to stop them from being fired."

In Egypt, a military representative told Palestinian news agency Ma'an that a rocket fired from Gaza during a Hamas experiment landed in Egyptian territorial water, a hundred meters from Rafah.

The source said that Hamas announced that it was a trial launch, and therefore it erroneously reached Egypt.