Civilian was working on border fence between Israel and Gaza when attack occurred. Victim flown to Soroka Medical Center in Beersheba, died of wounds shortly after

An Israeli civilian was shot and killed by sniper fire on Tuesday, in a shooting attack near the Gaza border fence in southern Israel.

The attack occurred as the man was working on the border fence between Israel and the Gaza Strip. He was taken by helicopter to Soroka University Medical Center in Beersheba. IDF troops launched a search of the area in the wake of the attack.  The IDF said in response to the attack that it "maintains the right to protect Israeli civilians and its soldiers."

At the same time, and apparently regardless of incident, an IDF force spotted a Palestinian approaching the border fence and entering a forbidden zone. IDF claim the Palestinian did not respond to warning calls by the soldiers and thus the forces opened fire towards the suspect's feet. The Palestinians reported the person injured is an 18-year-old who was moderately injured and was evacuated to a hospital in northern Gaza.

Moments before the incident, Prime Minister Benjamin Netanyahu addressed the security situation in southern Israel. "Since the end of Operation Pillar of Defense, the south has been the quietest it has been for years. We will continue to keep the south quiet with a strong hand and determination," Netanyahu said. 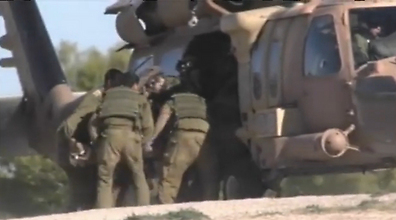 Regarding the recent spate of attacks, the prime minister added: "We have recently witnessed an increase in terror attacks. Are we facing a new intifada? We will act with a fierce offensive policy, so that whoever considers attacking us would have to think twice." 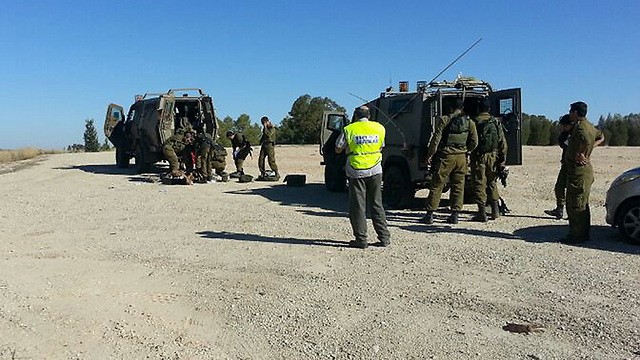 The shooting is the latest a string of attacks targeting Israelis in recent days. On Sunday, the quick thinking of a passenger and bus driver prevented what could have been a major attack when they spotted a bomb on a bus in Bat Yam. A police sapper was lightly hurt when the bomb detonated as he was dismantling it.

A little after midnight Sunday, a rocket fired from Gaza struck a residential area in Hof Ashkelon Regional Council, in southern Israel. There were no injuries reported, but light damage was sustained.

Hours later, an Israeli police officer was stabbed in the back in an apparent terror attack near the settlement of Adam. The man suffered moderate injuries.

Yoav Zitun and Mati Siver contributed to this report