After releasing three rounds of Palestinian prisoners as part of US-brokered peace talks, fourth and final round contains eight Israeli-Arabs convicted of murderous acts of terror. But Netanyahu's office refuses to confirm or deny reports of their release. Read full list:

After the first three rounds of prisoner releases passed almost without incident, the fourth and final round raises no small number of red flags.

According to Palestinians, in addition to Palestinian prisoners, Israel is expected to release a group of Israeli-Arabs. However Israel's commitment to such a demand is far from certain and it is possible that Prime Minister Benjamin Netanyahu never made such a promise – nor flat out rejected it.

In recent days, in what could be a possible attempt to distance himself from vocies critical of the release of 26 terrorists last week – five of which were freed to east Jerusalem – Netanyahu's people have been quoted sounding claims according to which the prime minister told Kerry he refuses to release terrorists with Israeli citizenship. An informed diplomatic source further said that in one of his meetings with Kerry, Netanyahu attempted to condition the release of Israeli-Arabs on the freedom of convicted spy Jonathan Pollard. The US reportedly refused to respond to the offer. 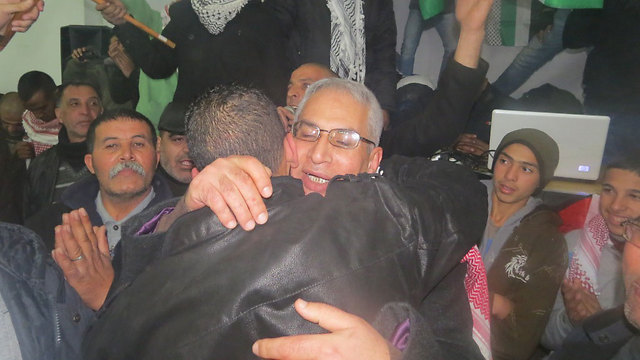 Released prisoners in east Jerusalem, this week (Photo: Hassan Shaalan)
On the list of those expected to go free in the fourth wave of prisoner releases are eight Israeli Arabs, including those involved in the Night of the Pitchforks – in which a group of Israeli-Arabs from Wadi Ara murdered three boot camp soldiers with axes and pitchforks – the murder of Abraham Bromberg and the commander of the terror cell that kidnapped IDF Master-Sergeant Nissim Toledano. Also on the list are some six east Jerusalem residents and Palestinian terrorists, including those behind the murder of Ofra Moses and her son Tal. In an official response given to Ynet, Netanyahu's media consultant stressed: "At no point did Israel commit to releasing Israeli-Arabs." Netanyahu's office also denied that the prime minister is responsible for the leaked reports according to which he refused to release Israeli-Arabs. Regarding the possible procedure of such a possible release in the future, Netanyahu's office said that "the government will have to authorize the release of Israeli citizens, like we promised in July."

Prisoners expected to be released in fourth round:

1. Karim Younes, arrested in 1983 for the murder of Avraham Bromberg

2. Maher Younes, arrested in 1983 for the murder of Avraham Bromberg

3. Bashir Al Hatib, arrested in 1987 for the murder of Hayim Hai Taktuk

4. Mahmoud Jabrin, arrested in 1988 for the murder of Ahmad Za’arura

5. Samir Sarsawi, arrested in 1988 for throwing hand grenade into a Haifa street

6. Ibrahim Agbaria, arrested in 1992 for the murder of Guy Friedman, Yaacov Dubinsky and Yuri Ferda

9. Mahmad Ashur, arrested in 1986 for the murder of David Kaspi

10. Samir Abu Na’ima, arrested in 1986 for placing two IED's on bus in Jerusalem

11. Mahmoud Isa, arrested in 1993 for commanding a cell that murdered Nissim Toledano

12. Na'il Salhab, arrested in 1993 for participating in the murder of Yaron Chen

15. Mahmad Daoud, arrested in 1986 for the murder of Tal Moses and Ofra Moses

19. Husni Sawalha, arrested in 1990 for the murder of Heisler Baruch

20. Fares Baroud, arrested in 1991 for the murder of Mordechai Roichman

21. Diaa Faluji, arrested in 1992 for the murder of Amatzya Ben Hayim

22. Mahmad Falina, arrested in 1992 for the murder of Yehudit Ostran

23. Nasser Abu Srour, arrested in 1993 for the murder of Hayim Nahmani

24. Mahmoud Abu Srour, arrested in 1993 for the murder of Hayim Nahmani

25. Alaa Alqarqi, arrested in 1993 for the murder of Erez Shmuel

Israel's move to release the 104 Palestinian prisoners jailed from before the 1993 Oslo Accords as a goodwill gesture to the Palestinians came in response to right-wing reluctance to accept a freeze in settlement construction. Thus, following every round of prisoner releases, Netanyahu's office is quick to publish new tenders for construction of thousands of new housing units beyond Jerusalem's 1967 borders. 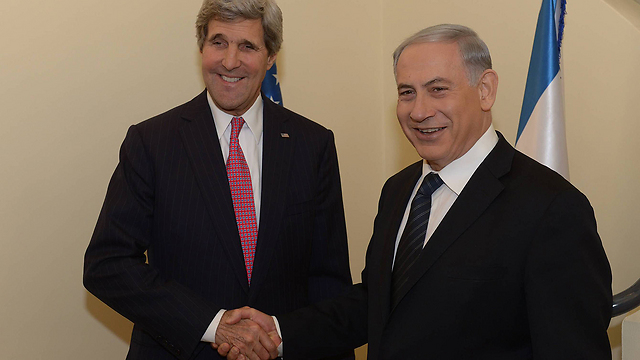 Netanyahu and Kerry, Saturday (Photo: Amos Ben-Gershom, GPO)
For now, no new tenders have been made public, but it is possible this will happen later on in the week. In reality, the publication of new construction projects are only declarative and political, since construction takes a long time, and if any agreement will in fact be reached, then a majority of these projects would not break ground. One the other hand, each such publication harms Israel's international standing, and recently Israeli diplomats and politicians have grown more and more concerned of a possible European boycott on Israeli exports, a scenario which would have devastating economic effects on Israel.

In the meantime Kerry's bouts of shuttle diplomacy continue – with his tenth still in process. Saturday he met with Palestinian President Mahmoud Abbas in Ramallah for some three hours.

Afterwards, Kerry claimed "We are not there yet, but we are making progress" towards what Kerry calls a 'framework agreement.' Such an agreement will be only preliminary, allowing talks to extend beyond their April dead-line.