Ya'alon: Kerry should win his Nobel and leave us alone

Defense Minister says in private that US security plan 'not worth the paper it's written on', insists Kerry 'cannot teach me anything about the conflict with the Palestinians'.

While the United States is pushing hard for a final agreement between Israel and the Palestinians, Defense Minister Moshe Ya'alon has expressed his great skepticism of these efforts, both in private conversations in Israel and in the US. In particular, Ya'alon has harsh words to say about Secretary of State John Kerry.

"Abu Mazen (Palestinian President Mahmoud Abbas) is alive and well thanks to us," Ya'alon said. "The moment we leave Judea and Samaria (the West Bank) he is finished. In reality, there have been no negotiations between us and the Palestinians for all these months – but rather between us and the Americans. The only thing that can 'save us' is for John Kerry to win a Nobel Prize and leave us in peace."

Ya'alon, who was IDF chief of staff from 2002-2005, at the height of the second intifada, also has little regard for the US-devised security provisions for a post-peace region.

"The American security plan presented to us is not worth the paper it's written on," Ya'alon said. "It contains no peace and no security. Only our continued presence in Judea and Samaria and the River Jordan will endure that Ben-Gurion Airport and Netanya don't become targets for rockets from every direction. American Secretary of State John Kerry, who turned up here determined and acting out of misplaced obsession and messianic fervor, cannot teach me anything about the conflict with the Palestinians." 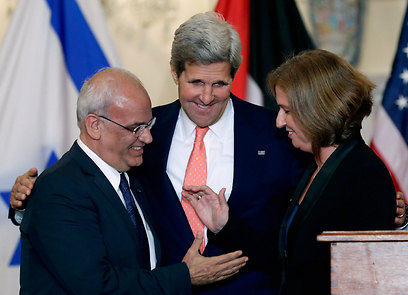 In talks with the Americans, Ya'alon has argued that Abbas is not a partner for a final arrangement due to his intransigence. The independent Egyptian newspaper Al-Masry-al-Youm quoted sources in the Arab League as saying that Kerry asked the League's foreign ministers in a meeting in Paris on Sunday to show some flexibility, and push the Palestinians for some concessions so that the Obama administration could press Israel for similar accommodations. Kerry expressed the concern that if his initiative failed, it could mean a major setback to the peace process as a whole. During the three-hour meeting, the sources said, Palestinian foreign minister Riad al-Maliki responded aggressively to Kerry's request, in particular to the ongoing Israeli demand for the Palestinians to recognize Israel as a Jewish state. Al-Masry said that the Arabs rejected Kerry's appeal, offering blanket support for the Palestinian stance.