PM issues warning in wake of intensified rocket fire from Gaza Strip at Israel's southern communities; says will 'respond against those who attack us.'

Speaking at a joint press conference with his visiting Canadian counterpart Stephen Harper, Netanyahu observed that Israel will always retaliate to attacks. 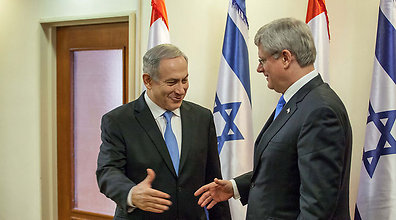 "We foil terrorist attacks when we identify that they are in the making, and we respond against those who attack us," Netanyahu's spokesperson, Ofir Gendelman, quoted him as saying.

"If Hamas and the other terror organizations have forgotten this lesson, they will learn it again the hard way - and very soon," the prime minister said.

There has been an intensification in rocket fire from Gaza over the last weeks: On Monday, at least one rocket hit open ground in the Eshkol Regional Council in the Negev, and two more rockets struck open areas near Eilat.

Fearing a strong Israeli response, Hamas has taken fresh steps to calm the situation, setting up roadblocks in an effort to prevent members of other militant Palestinian groups such as Islamic Jihad from launching rockets.

Israel has in the past launched major military operations in the Hamas-ruled Gaza Strip in an effort to quell the rocket fire that has plagued its southern communities for many years. The most recent operation, in November 2012, saw rockets fired from Gaza strike the Tel Aviv area for the first time.