'The State needs to do much more than it has done until now,' Gantz says of growing threats to country

Hinting that the defense budget cannot be cut, IDF Chief of Staff Benny Gantz said Wednesday that the relative quiet being enjoyed in Israel recently is hanging by a thread.

His comments came hours before a terrorist opened fired on an IDF outpost east of Ramallah. IDF soldiers returned fire at the man and killed him and no soldiers were injured. 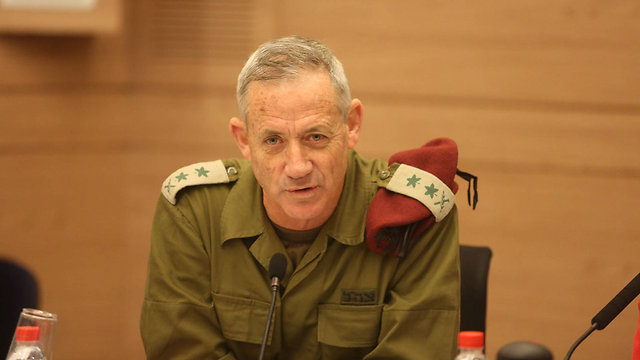 "There is not a week that goes by in which we are not challenged along one of the fronts. If a rocket fired from Sinai would have hit a hotel and not landed in the sea – it would have been a whole different story," Gantz said.

He warned that cutting the budget could harm the army's preparedness, saying "We need an adequate budget, we cannot afford incompetency in the army."

Gantz spoke during a conference called Military Power Structure and Its Implementation held in memory of former IDF chief of staff Amnon Lipkin-Shahak. "Mistakes are made in managing resources," Gantz said, adding that "I understand there other priorites in the country, but the army cannot be miserable. An army that doesn't radiate strength is inviting trouble."

The IDF chief attempted to dispel the claim that the internal conflicts plaguing Israel's neihbors allivated the burden on the defense establishement and keep Israel safe. Acording to Gantz, regardless of the result of the Syrian civil war, it will be a threat to Israel.

"Strategically, the chances of an enemy army marching on our borders are low but have not disappeared. Regarding Syria: If you flip a coin (about the fighting's results) it will be negative either way. Either Assad survives with the aid of Hezbollah and Russia, or the Islamic Jihad rises to power. But it is true that no Syrian division will be marching on the Golan."

Regarding the cyber-attacks, Gantz said "the field of cyber is being developed, but there have been some mistakes during the process. The State needs to do much more than it has done until now… it cannot wait."