In an exhibit hosted at the Tel Aviv Port as part of Space Week, photography students from the Bezalel Academy of Art collaborate with scientists to explore the distant and the unknown

VIDEO – Tel Aviv port is hosting an exhibition on space photography, aiming to cultivate an interest in space among the Israeli public.

The exhibition is part of Space Week, now running in Israel for the third consecutive year.

"First of all, we had a competition on our site, open to the Israeli public, and we got wonderful pictures. The other one is of the astronaut that spent a few months in the space station. He took about 15,000 photos while he was in space.

"And the last one is our collaboration of Bezalel in which we picked up about 30 students, and you can see the vision of an art photographer when he looked at space.”

Photography students from the renowned Bezalel Academy of Art collaborated with scientists and explored the distant and the unknown.

"This project wants to show the link between technology, science and art," says Miki Kratsman, head of the Photography Department at the Bezalel Academy. 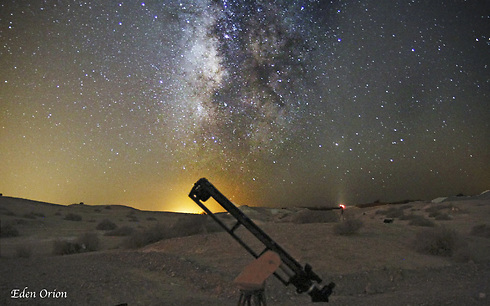 The young photographers were inspired by tours in space facilities in Israel and were assisted by Google Earth and other such tools. Some of the students' photos are a product inspired by space, and not a precise image of space itself.

Ilan Ramon, Israel's first astronaut who was killed in the Columbia Space Shuttle, is also being honored this week. Will Israel be able to send another astronaut to space? "This was a dream and it ended in such a tragedy," says Kidron. "We keep dreaming all the time to make it happen again. It takes time, but we are aiming at this direction.”