After US peace envoy spills beans on possible framework agreement between Israel and Palestinians, world top diplomats to meet in bid to give Kerry's plan push of support

Top officials from the United Nations, United States, Russia and European Union will meet on Saturday to discuss how they can help US Secretary of State John Kerry's drive for a Middle East peace deal, the EU said on Friday. The meeting of the so-called Quartet of Middle East peace mediators will be held in Munich on the sidelines of the annual security conference there.
Framework Deal
Indyk: Framework deal to include compensation for Arabs, Jewish refugees
Yitzhak Benhorin and Itamar Eichner
US peace mediator Indyk spill beans on US-led framework agreement, saying deal to include mutual recognition, security arraignments, Israeli sovereignty for roughly 75% of settlers and compensation for both Jews and Arab refuges from 1948
Indyk: Framework deal to include compensation for Arabs, Jewish refugees
EU foreign policy chief Catherine Ashton said she would chair the meeting with Kerry, United Nations Secretary-General Ban Ki-moon, Russian Foreign Minister Sergei Lavrov and Quartet envoy Tony Blair, the former British prime minister. "This meeting takes place in a moment when difficult and bold decisions need to be made. The dividends of peace for Israelis and Palestinians are enormous," Ashton said in a statement. "I hope that together we can help those decisions to become a reality to continue working towards a negotiated peace agreement, setting an end to the conflict and fulfilling the legitimate aspirations of both parties," she said.

Kerry has toiled for six months to push Palestinians and Israelis towards an elusive peace deal to end their generations-old conflict.

A handful of diplomats remain hopeful he will defy the pessimists and secure at least a framework deal in the coming weeks to allow detailed talks to continue beyond the original nine-month deadline, which expires on April 29. 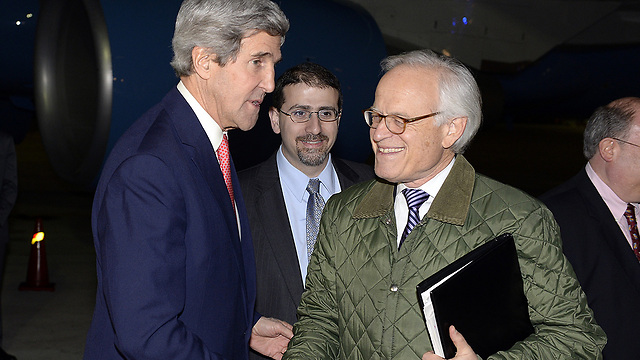 But, with both sides far apart on many core issues including borders, security, the right of return for Palestinian refugees and the future status of Jerusalem, many Palestinians and Israelis believe the talks are going nowhere.

Earlier Friday, it was reported that Martin Indyk revealed for the first time some details from the framework agreement being discussed by Israelis and Palestinians. Speaking to a conference of Jewish organizations that the framework agreement between Israelis and Palestinians will include compensation for Palestinian refugees, and will also reference the right to compensation for Jews who were forced to flee Arab countries on the eve of Israel's formation.

Indyk noted that roughly 75%-85% of Jewish settlers will be allowed to remain in their West Bank homes as part of land swaps between Israel and the Palestinians, which will be based on the June 4, 1967 Green-Line.

Indyk denied stating any specific numbers in regards to ongoing negotiations when asked by Yedioth Aharonoth.

Acording to those present, Indyk added that the question of whether settlers will be allowed to remain under Palestinian sovereignty will be postponed until a final status – as opposed to framework – agreement. According to Indyk, the Palestinian leadership has no intention of forming a Palestinian state "clean of Jews".

A number of those present at the meeting with Indyk, said the envoy sounded "calm and optimistic," and noted that he claimed that "we are weeks, not months, from a framework agreement," the details of which have been agreed on but "without (the sides) having to sign."

Regarding the deal's final details, Indyk stressed it is contingent on the progress currently being made by the two sides. “There may be things we need to say because they can’t say them yet," Indyk stressed.