'There is no better answer than this proving that the Jewish people live'
Photo: Eli Mandelbaum

Thousands of eligious leaders from Israel and Europe arrive in Hungary to commemorate beginning of Hungarian Jews' Holocaust.

Budapest's residents were in for an unusual sight this week, as thousands of rabbis marched on the banks of the Danube, singing "Ani Maamin" ("I Believe"). The rabbis arrived at the Hungarian capital from Israel and Europe to commemorate the 70th anniversary of the Nazi invasion, which marked the beginning of the Holocaust of Hungarian Jews.
Dark Past
Hungary's president acknowledges collaboration with Nazis
Reuters
President Janos Ader says if World War II had gone according to plans of Adolf Hitler and his Hungarian fascist allies, Jews would have been exterminated completely from country.
Hungary's president acknowledges collaboration with Nazis
The highlight of the event was a moving memorial ceremony for the victims, which was attended by the chief rabbis of Israel and European countries. Israel's Chief Rabbi David Lau told Ynet he was emotionally moved by the Jewish presence near the Gestapo headquarters. "Next to the place where Eichmann sat, the man who thought he was king of the world and could rule and decide where there would be Jews and when there would be Jews. And he thought that perhaps one Jew would be left in a museum – and now we see Jews marching here with one main purpose: To spread and continue Judaism. There is no better answer than this proving that the Jewish people live." The Kaliver Rebbe, who was born in Transylvania, returned on Monday to the country that expelled him and his family to Auschwitz, which he left alone at the end of the war after serious torture. "The SS took us from the bunker, 20 people," he said. "They didn't bring us any food or drink for two days. We had a small pocket with breadcrumbs, and each of us took our the crumbs and put them on the floor, so that if someone was already starving to death, they would still have something to live on." 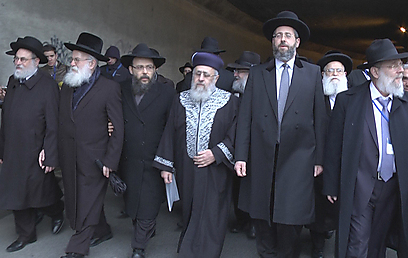 Rabbi Menachem Margolin, director-general of the Rabbinical Center of Europe, who initiated the event, told Ynet that the main danger faced by Europe's Jewish communities was assimilation.

"It's not anti-Semitism, as people think erroneously. And that's the main goal of this conference," he said, adding that the growing anti-Semitism was still a serious problem. "The organization's goal is to fight phenomena threatening the Jewish community's life, like slaughter and circumcision bans, which are hidden anti-Semitism."

Rabbi Binyomin Jacobs, chief rabbi of the Netherlands, expressed his concern over the growing anti-Semitism. "It's becoming visible. You see it on the street," he said. "I have been in Holland for almost 40 years. I was born in Holland. And up until several years ago, no one ever called me a 'dirty Jew' on the street. Today it's an almost ordinary thing. On the other hand, there are also groups of Christians who really love the Jews and help us."