US opposes Palestinian moves to statehood

US Ambassador to the UN says any unilateral action could be 'tremendously destructive' to the peace process; Israeli, Palestinian, American negotiators to meet in attempt to bridge gaps.

WASHINGTON - US Ambassador to the UN Samantha Power told a House panel on Wednesday that the United States opposes all unilateral actions that the Palestinians take to statehood.


She said there are no shortcuts to statehood, and that any unilateral actions could be "tremendously destructive" to the peace process.

Israeli, Palestinian and US negotiators are set to meet Wednesday night, officials familiar with the negotiations said, in an attempt to resolve the differences between the two sides. US envoy to the Mideast talks Martin Indyk will lead the meeting that will also be attended by Israeli negotiators Justice Minister Tzipi Linvi and attorney Yitzhak Molcho, and Palestinian negotiator Saeb Erekat.

Palestinian Authority President Mahmoud Abbas had promised at the beginning of the current round of negotiations to suspend Palestinian membership applications to United Nations agencies and international conventions. Israel, in turn, pledged to release 104 long-held Palestinian prisoners during the talks, which were to last until late April.

But in a surprise move Tuesday, Abbas signed letters of accession to 15 international conventions, saying this was a response to Israel's refusal to release the last of four groups of prisoners by the end of March, saying the release was conditioned on progress made in negotiations.

A senior State Department official criticized both sides on Wednesday, saying both Israel and the Palestinians have made "unhelpful steps" in the past day but neither have indicated they want to end peace talks.

The official who briefed reporters in Brusssels on condition of anonymity, said the United States would discuss options for the path ahead with both parties in the next few days.

"Both sides have taken unhelpful steps over the last 24 hours. But neither party has given any indication...that they want to end the negotiations," the official said.

US Secretary of State John Kerry canceled plans to return to the region on Wednesday, but also said it's "completely premature" to write off the talks, while American officials hinted that the move was viewed as pressure tactic directed at Israel rather than the US. 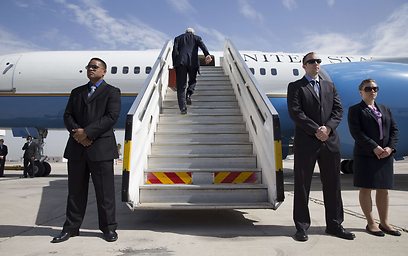 In November 2012, the UN General Assembly overwhelmingly recognized a state of Palestine in the West Bank, Gaza and east Jerusalem as a non-member observer state. The vote came despite objections from the US and Israel, which portrayed it as an attempt to bypass negotiations.

Palestinian officials have said that recognition paved the way for the Palestinians joining 63 UN agencies, conventions and institutions, including the International Criminal Court.

Palestinian Foreign Minister Riad Malki on Wednesday handed the letters of accession signed by Abbas to the relevant parties, including a UN envoy, his office said.

Among other things, Abbas requested accession to the Geneva Conventions, which establish standards of conduct and treatment of civilians at times of conflict, and to various human rights treaties.

The International Criminal Court was not on the list. The ICC is seen by some as the Palestinians' "doomsday weapon" because it could theoretically open the way to war crimes charges against Israel over its settlement construction on war-won land.

Abbas' step came at a time when Kerry's mediation efforts already appeared in trouble. Kerry had set an April 29 deadline for the basic outlines of an Israeli-Palestinian deal, but in recent weeks was pushing both sides to extend the talks until the end of the year.

The Palestinians said they would not discuss an extension until the last group of veteran prisoners was released. Israel, in turn, was trying to make that group part of a new deal on extending the talks.