Jobbik leader Gábor Vona. 'Not a good thing for the Jews'
Photo: AFP

Far-right party's achievement in Hungary elections comes as no surprise to local Jewish community. 'People who walk around with a skullcap are sometimes verbally attacked,' says Budapest rabbi.

VIDEO - The substantial gains made by far-right opposition party Jobbik in Hungary's general elections this week have raised concerns among the country's Jews. Although the ruling party will likely establish a coalition without the party accused of anti-Semitism, some of Hungary's Jews are thinking of leaving the central European country.

Yariv Tal, 44, has been living in the Hungarian capital of Budapest with his family for 15 years. "You must understand that the Jobbik party is very disappointed with the results, because it thought it would get more votes," he says. "The party is growing stronger here, but I believe it stems from despair and disappointment from the other parties, more than from a far-right preference.

"This party embraces everything that used to be the National Hungarian Guard, which was founded in 2000 and was outlawed. Its members joined the Jobbik party which was founded by Csanád Szegedi and other people, and Szegedi recently discovered that he is actually Jewish."

Tomi Vero, the rabbi of District II in Budapest, says that "the Jewish community is afraid that following the high percentage of votes received by the Jobbik party, its radical presence in the parliament will be further emphasized.

March of the Living
Rabbis march in Budapest 70 years after Nazi invasion
Eli Mandelbaum
Thousands of eligious leaders from Israel and Europe arrive in Hungary to commemorate beginning of Hungarian Jews' Holocaust.
Rabbis march in Budapest 70 years after Nazi invasion
"Until now, the argument between the Jewish community and the parliament dealt with the Hungarian's involvement in the annihilation of Hungary's Jews in 1944, and the parliament has denied this involvement so far. We are waiting to see what will be its stance now, but the fact that Jobbik is

Tal estimates that "we won't see more than what we've seen so far following Jobbik's achievement, and we have seen a a lot. You can see swastikas spray-painted all over the city, including a swastika comparing Zionism to the Nazi Party, which we saw during the election campaign too.

"The interesting thing is that during the election campaign we also saw swastikas on Jobbik's posters, which were marked by the Hungarians themselves, because this party is perceived as too radical and the Hungarians' great fear is that it will rise to power. This step on the Hungarians' part shows that they have pretty much regained their senses. The winning party, Fidesz, led by Prime Minister Viktor Orbán, is a moderate centrist-rightist party." Describing the life of Hungary's Jews today, Tal says: "I won’t tell you that people are afraid of going out on the street, but you do see anti-Semitism, you feel it, and it is present almost everywhere, both in drawings and in graffiti. "We have friends who are not-Jewish but have dark hair, and when they got on the tram they were verbally attacked by radical rightists, who shouted at them, 'Jews, go away.' The children don't feel the anti-Semitism in the educational institutions, because it raises its head mainly in political protests on main streets." Rabbi Vero adds that "there are no physical assaults of Jews, but people who walk around Budapest's streets with a skullcap are sometimes verbally attacked with shouts such as 'Jews, go home' or 'this is not your place.' There are drawings of swastikas and the Jews are afraid of being harassed." 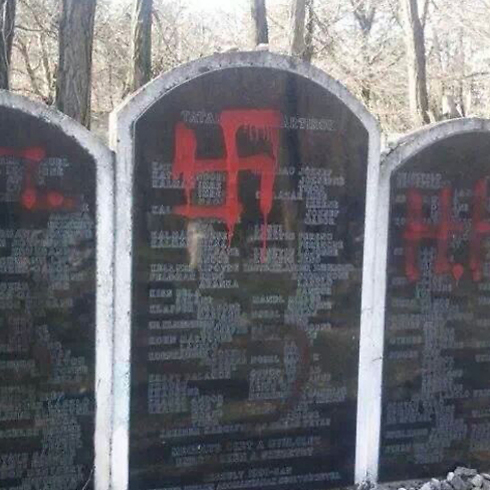 Will Jobbik's gains cause Jews to leave Hungary? Tal doesn't think so. "These gains were expected and everyone knew it was going in this direction," he says. "Most of Jobbik's voters are simple people, not academics and not exactly the middle class, and they can fall for this radical agenda.

"People here knew that the party would grow stronger because of the disappointment from the difficult economic situation, among other things, but these results are not going to change what we had here until now. The situation will just stay the same." Rabbi Vero, on the other hand, notes that "there is real fear that Hungary's Jews will leave. I have several friends who have already made aliyah. There is a concern that the hatred against Jews will increase. I have friends who wrote on Facebook this morning that following Jobbik's achievement they must leave Hungary."

'An immediate change is not expected'

Professor Robert Wistrich from the Department of History at the Hebrew University in Jerusalem, an expert on modern anti-Semitism and the Holocaust, believes there will be no dramatic changes following Jobbik's gains.

"On the whole, these elections ended with a sweeping victory for the ruling party, which apparently has enough seats to implement its policy without building a coalition with Jobbik and making it part of the government," he says. "So I do not expect an immediate change for the worse in the situation of Hungary's Jews. But we must understand that the situation has not been good or healthy since 2010, when Jobbik made its way into parliament." Prof. Wistrich adds that "according to Hungarian Jews' tradition, even a much greater earthquake will not make the hard core of the Jewish community change its direction. Exactly 70 years have passed since the most dreadful process in the history of Hungary's Jews, in which more than half a million Jews were sent to die in Auschwitz in 1944. This atrocious act, which has no precedent in Jewish history, was also done with the full cooperation of thousands of Hungarians in the army, in the police and in the government bureaus. "Hungary's Jews knows that very well, and they know that despite the lip service paid by the current government in terms of the opposition to anti-Semitism and Holocaust denial, there is an years-long tendency in the country to downplay the Hungarian role in the annihilation of the Jews, and this creates tensions which have not disappeared even after 70 years. "On the other hand, Hungary is facing criticism from the European Union and there is a certain concern, and Jobbik's good results will definitely increase the feeling among some EU countries that there is a real need to closely supervise what is going on there, and I am certain that the Hungarian government is well aware of that." Addressing the election results in his country, Hungarian Ambassador to Israel Andor Nagy told Ynet that Jobbik was an opposition anti-Semitic far-right party which would never be given the opportunity to rule the country or even serve in the coalition. He added that Jobbik represented a minority in Hungary, but was very loud and enjoyed the ability to manipulate the country's disadvantaged classes. Seeking to alleviate the Jewish community's fears, the ambassador said that Hungary's strong conservative government would do all in its power to guarantee the safety of Hungary's Jewish community. He added that the prime minister had declared a "zero tolerance" policy, which means there is no room for hostile speeches against anyone, including Jews. In addition, he said, the government has decided that Holocaust denial is a criminal offense which will be punished.