Ynet accompanies fighters from Shayetet 13, seen as one of the world's finest elite units, as they spend the day training.

It is noon at the Atlit base, the training center of the Israel Defense Forces’ legendary Shayetet elite naval commando unit. The sun is shining, yet it has started to rain. The commandos we are here to meet are mainly concerned about our photographer, Gadi Kabalo. They want to finish the shooting session as early as possible; to pull two commando teams from a tight schedule is no easy task.

The upheavals in the Middle East of recent years have created multiple challenges for the IDF, and had a direct impact on ongoing operational activities - especially in units such as Shayetet 13. 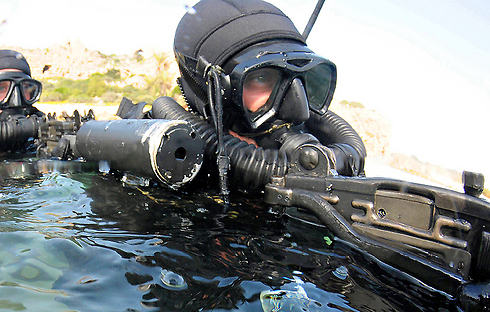 The unit, whose name translates as Flotilla 13, was formed in 1949, shortly after the creation of the State of Israel. Specialists in counter-terrorism and hostage rescue, its fighters have played a major role in all of Israel's subsequent conflicts, growing more skilled with time, as well as taking part in humanitarian campaigns, such as the airlift of Jews from Ethiopia. It is widely regarded as one of the world's best elite units.

In the absence of an official conflict, IDF activity is based on what is referred to as "war between wars," and the naval commando unit is undoubtedly one of the most influential factors in this arena. In the last year alone, Shaytet 13 has conducted numerous complex operations behind enemy lines, hidden from the eyes of the public. 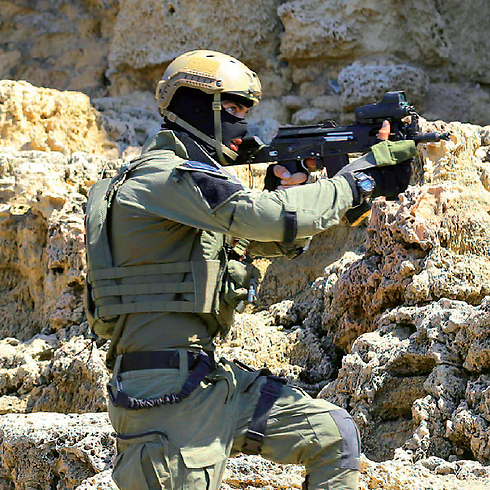 One tangible example of such missions came last month, when Shayetet 13 fighters made headlines in Israel and all over the world following the capture of the Iranian weapons ship KLOS-C in international waters. All of the 10 fighters we met took part in the operation, dubbed Full Disclosure. Impressive as it was, it was hardly the zenith in the careers of these veteran fighters, who have taken part in operations the vast majority of us will probably never hear about.

Naval commando fighters endure one of the toughest training courses in the IDF in their bid to win their coveted unit batwings insignia. The 20 months of training includes basic training with the Nahal brigade, further basic training at the unit’s central base in Atlit, which schools the troops in maritime warfare, and advanced training in combat diving, navigation and Shayetet’s unique watercrafts. 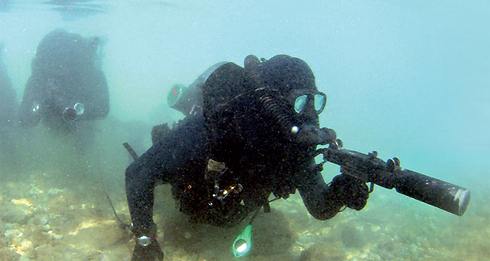 Shayetet fighters can remain underwater, undetected, for hours (Photo: Gadi Kabalo)
At the end of the course, fighters are assigned "professions", and each team specializes in one of three commando roles: diving, raids or above water. The training on display for us comprised of a team of divers and a team of raiders. The divers' team included four experienced divers who finished their training course two years ago. Descending into the water, the fighters are roped to one another, symbolizing their mutual dependence. Each team member has a partner, and together they perform their tasks underwater, watching each other's backs. 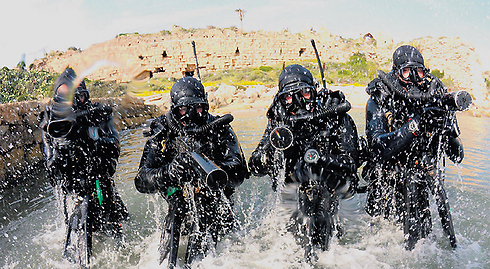 Shayetet fighters undergo 20 months of boot camp (Photo: Gadi Kabalo)
The fighters traveled from Atlit to the training area by boat, after taking a not insignificant amount of time to upload their specialist equipment. The divers use unique Shayetet 13 wetsuits, which include diving fins, masks, weapons and state-of- the-art breathing apparatus. It’s only by jumping into the water with them that is possible to fully appreciate why the Shayetet fighters are referred to as "the silent men". These fighters move with great stealth; out of the water, it is extremely difficult to follow their submerged location – they don’t make a sound, barely permitting any oxygen bubbles to escape, with movements that make it almost impossible for an enemy to track them. 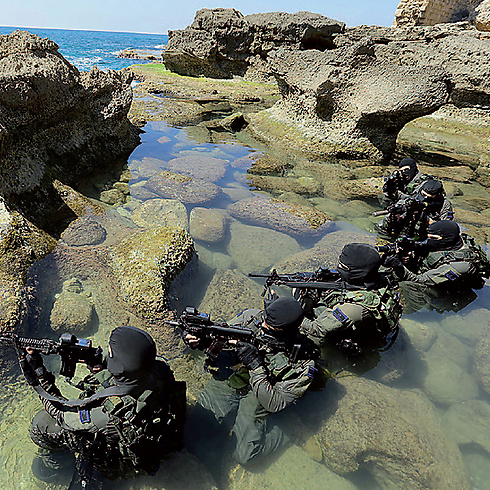 Training includes conducting special ops with other IDF elite units (Photo: Gadi Kabalo)
The Shayetet divers engage in guerilla combat and underwater commando warfare, and are able to reach any port undetected. They are trained in a variety of martial arts, and also undergo training and carry out joint ops with other IDF commando units.

The divers can remain underwater for considerable amounts of time. Without a group of journalists for company, the training would probably have continued for many hours. In the water, they practice combat diving - testing their ability to dive together as a team and accomplish set tasks as one body. 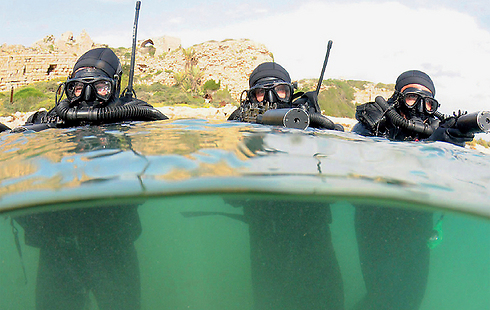 The unit is thought to be one of the best in the world (Photo: Gadi Kabalo)

After the training is over, the divers come up to the boat and sail back to the base in the same silence in which they arrived. During the long hours of the training, they didn't set foot on the ground at all - it's almost as if they can live in the water for an unlimited time.

After the divers finish their training, the raiders arrive. The team is comprised of six commando fighters. This is a team that only finished its training a year ago, but has already taken part in many operational activities in far-flung locations, including the takeover of the KLOS-C. This is a small and tactical force, with a range of abilities we were allowed to witness first-hand. It is apparent that the fighters are used to getting their uniforms wet without a second thought. They are equipped with the IDF's most up-to-date combat uniforms, designed for their specialized missions. The training starts once the fighters are in the water, almost impossible to distinguish from large rocks around them. They are able to sit in the same place for hours without even the slightest movement, laying in waiting for the enemy in their camouflaged hiding place. The force carries out a raid from the sea to the beach, aiming to take over a given structure. The fighters rehearse their transition from the sea to the land, all the while carrying some of the army's most sophisticated weaponry. It's late evening and darkness descends. The base becomes even more active, and it seems that the training day will never end. The training sets them in good stead, for another daring operation we might perhaps only ever hear of via the foreign media.