The IDF Spokesman's Office said in a statement that "IAF aircraft attacked two terror targets in the south of the Gaza Strip and an additional target in the center of the Strip. Direct hits were confired, and all aircrafts returned safely to their bases."


Palestinian reports, however, claimed four targets were. According to a Hamas statement, targets included a security facility in the central Gaza Strip, near the Nuseirat refugee camp, another strike hit a livestock farm nearby and a third one hit an open area in Deir al-Balah. A fourth target was a Hamas military post near Khan Yunis in the south of the Strip. 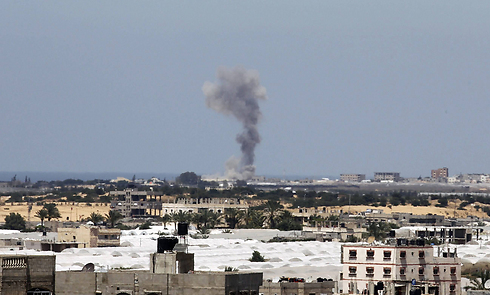 "Israeli civilians celebrating the Passover Holiday woke up this morning to the sound of Code-Red alarms and rockets. It is our obligation to seek out and target those who wish to attack our civilians and soldiers and to eliminate their capabilities. Hamas rocket terrorism is an intolerable reality Israelis should not have to accept," IDF Spokesman Peter Lerner said Monday.

IAF helicopters also reportedly fired warning shots towards areas in the northern Gaza Strip from where rockets were suspected to have been launched.

The silence of the Passover holiday was disrupted Monday morning when seven rockets fired from the Gaza Strip exploded Sderot, Sha'ar HaNegev Regional Council and the Eshkol Regional Council.

One of the rockets fired at the Israeli south fell on a road in a residential area of Sderot near a market store and a synagogue, causing minor damage to the road and to nearby stores but no injuries. Security forces were still looking for a second rocket that fell in an open field. 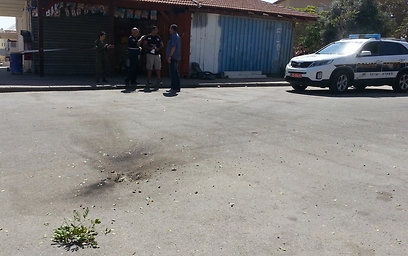 Four others fell in open fields in the Sha'ar HaNegev and Eshkol regional councils, and caused no damage or injuries.

Residents in the area reported on sounds of explosion and the Code Red siren was heard.

So far, a total of 100 rockets were fired from Gaza at southern Israel since the beginning of 2014, the IDF said.

In a separate incident that happened Monday at around 7 am, an RPG rocket was fired by a terrorist cell in the Gaza Strip at an IDF force making a routine patrol in armored vehicles along the Israeli side of the Gaza border fence at the south of the Strip. None of the soldiers were hurt and no damage was caused.

This was the first RPG rocket fired at IDF soldiers since Operation Pillar of Defense in November 2012.

The IDF was looking into the possible connection between the two incidents, and said that it considers any attempt to harm the citizens of Israel and its security forces to be serious, and that it viewed Hamas as responsible for the rocket fire.

The rocket fire comes as Sderot prepares to celebrate the Mimouna, a traditional Moroccan Jewish celebration held the day after Passover to mark the start of spring and the return to eating chametz. The Mimouna celebrations in Sderot are considered one of the biggest events in the country, since many of the city's residents are Moroccan Jews.

Silvia Gabay will host the biggest Mimouna in Sderot on Monday evening, where hundreds of people were expected to attend.

Her brother, Yuval Gabay, said: "We've been hearing loud explosions since this morning and now - a rocket fell inside the city. I hope the army works to restore the calm because we have no intentions of cancelling the Mimouna celebrations. Even if more rockets fall, we'll have the celebrations as planned. We've had Mimouna celebrations under the threat of rockets before, and it will not ruin our party."

A resident of the neighborhood where the rocket fell said: "The entire street was closed by police forces looking for the rocket. Now I'm at the secure space with the children and we're hearing gunfire from the army. I don't know where this is suddenly coming from. We've had calm in the past few days, but as of this morning we find ourselves going in and out of the secure space every few minutes."

Last week, a rocket was fired at the Hof Ashkelon Regional Council during the holiday, but landed in Palestinian area inside the Gaza Strip. The week before, a mortar shell exploded in the Sha'ar HaNegev Regional Council. No one was hurt.

This is an ongoing story and will be updated continuously.