Fatah and Hamas have reached an agreement to form a unity government within five weeks, Hamas leader Ismail Haniyeh told reporters in Gaza on Wednesday, after the warring factions signed a deal to end years of internecine hostilities that effectively separated the West Bank and Gaza Strip from one another.

Haniyeh further said new elections would be held within six months for first time since a 2006 ballot saw Hamas saw trounce Fatah in an unexpected territories-wide victory. "This is the good news we tell our people: The era of division is over," Haniyeh told Palestinian reporters to loud applause.

Similar reconcilation agreements were reached in principle in the past but never implemented. Hamas seized Gaza from Abbas in 2007, leaving him with only parts of the West Bank. Both sides have since become entrenched in their territories. 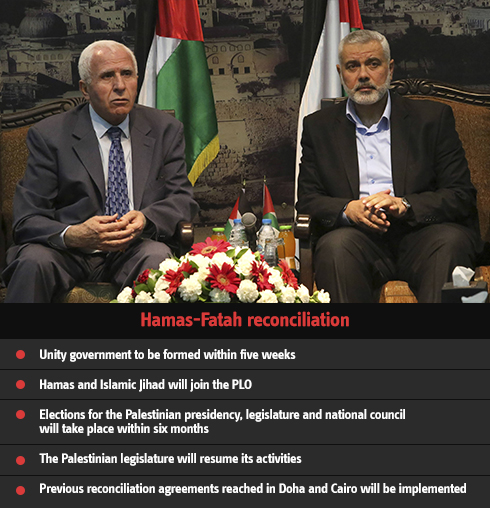 Haniyeh praised the agreement, saying "national reconcilaition, ending the division and mending the rift has become a national responsibility."

The deal, Haniyeh said, comes "at a time of an assault on the Palestinian cause, assault on the al-Aqsa mosque and a time when the entirety of Jerusalem is being painted Jewish."

"Today we can say that we agreed about all what we have discussed," said senior Fatah official Azzan al-Ahmed, adding "so we will forget what happened in the past. The result of the efforts that we have made is clear today, as we agreed on all the points that we discussed."

Palestinians in Gaza celebrate the unity agreement between Fatah and Hamas (Photo: AFP)

Laying out the details of the agreement, Haniyeh said: "The government and the President (Mahmoud Abbas) will start the discussions to form the unity government from today and he should announce it within the legal time, within five weeks according to the Cairo agreement in and the announcement that was made in Doha," he said referencing previous agreement reached between the two sides that were never implemented.

Before the official press conference, Palestinian news agency Ma'an reported that there had been an agreement in principle to form a unity government which would be led by either Palestinian Authority President Mahmoud Abbas or former senior Hamas official Nasser al-Shaer.

A Palestinian official who attended Tuesday's late-night meeting said Wednesday morning there had been an "agreement in principle" on forming a "government of experts," a term for a cabinet staffed by technocrats rather than politicians.

The agreement, between members of the PLO and Hamas, was reached following talks in Gaza City which began on Tuesday evening, a member of the PLO who wished to remain anonymous told AFP.

The Palestinian factions were expected to announce the deal in a press conference from Gaza on Wednesday afternoon.

"There has also been progress on the holding of future elections and the composition of the PLO," said the Palestinian official without giving further details.

Another Palestinian official told Ma'an Abbas was expected to issue a presidential decree determining a date for elections to the presidency, the legislative council and the Palestinian National Authority.

"A positive atmosphere prevailed" during the meeting, Hamas member Khalil al-Hayya said in a statement on Wednesday, Ma'an reported. 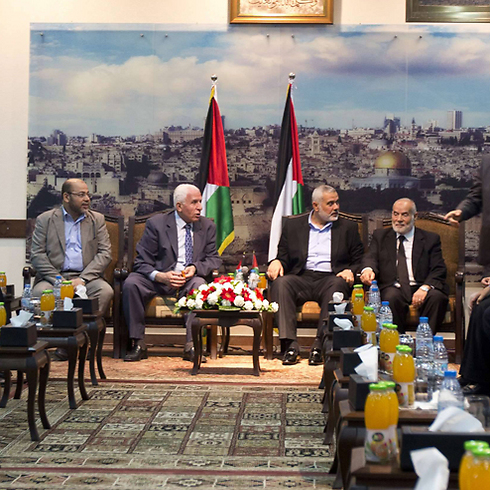 "He has to choose. Does he want peace with Hamas or peace with Israel. You can have one but not the other. I hope he chooses peace (with Israel), so far he hasn't done so," Netanyahu said, repeating comments he made on Monday.

Netanyahu on Monday also belittled the PA's threat to dismantle, saying: "Yesterday the Palestinian Authority discussed dismantling, today it is mulling uniting with Hamas. Let them decide whether to dismantle or unite."

But Palestinian hopes of reconciliation have been dashed before. Since 2011, Hamas and Fatah have failed to implement an Egyptian-brokered unity deal because of disputes over power-sharing and the handling of conflict with Israel. 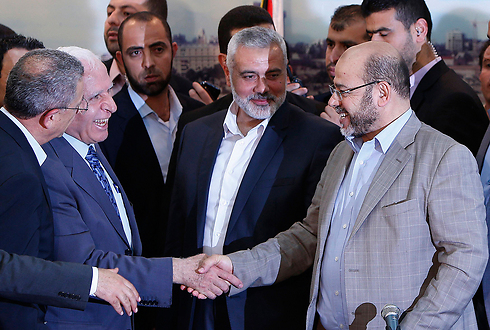 A reconciliation meeting between Fatah and Hamas (Photo: Reuters)

"People have heard the same thing on many occasions but each time the agreement was violated by Fatah or Hamas. Clearly, both sides do not meet their commitments," Samir Awad, a professor of political science at Birzeit University in the West Bank, told AFP.

"Reconciliation (inter-Palestinian) and negotiations (with Israel) are now tactics. Each side has its own calculations and reconciliation has little substance on the ground. It could derail at any moment," added another political scientist, Hani al-Masri.

The PLO delegation, who arrived Tuesday in the Gaza Strip, is headed by Azzam al-Ahmad, a leader of the nationalist movement Fatah. He was greeted by Haniyeh and his number two, Moussa Abu Marzouq.

"I called to implement the Palestinian reconciliation in order to form one government, one political system and one national program," Haniyeh said. 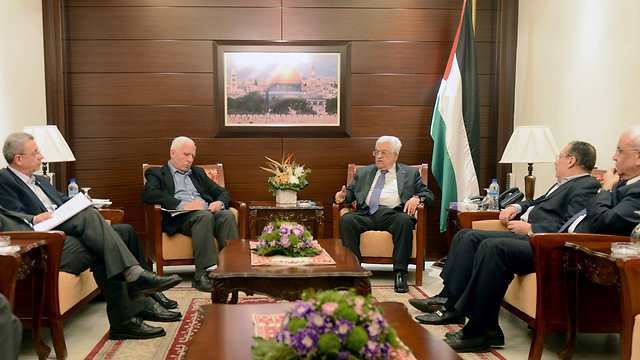 Abbas, whose Palestinian Authority exercises limited self-rule in the West Bank, told reporters on Tuesday that if peace talks did not continue, Israel would be obliged to take on the administrative and financial burden of governing Palestinian areas. 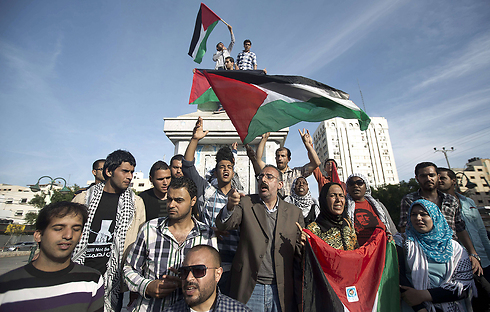 Kerry revived the peace talks in July after a nearly three-year hiatus, with the aim of ending a decades-old conflict and establishing a Palestinian state alongside Israel.

The negotiations plunged into crisis this month when Israel refused to carry out the last of four waves of prisoner releases unless it received assurances the Palestinian leadership would continue the talks beyond the end of April.

After Israel failed to free the prisoners, Abbas responded by signing 15 international treaties, including the Geneva Conventions on the conduct of war and occupations. Israel condemned the move as a unilateral step toward statehood.

Hamas is adamantly opposed to negotiations with Israel, that have recently reached an impasse with each side refusing the demands of the other to continue negotiations beyond the April 29 deadline.

AFP, Reuters, the Associated Press and Ynetnews contributed to this report.