Israel notes remembrance day in ceremonies across the country; President Peres: "We must not ignore anti-Semitism, rise of far-right parties. Watch live ceremony from Kibbutz Tel Yitzhak with Livni, IDF chief of staff.

The State of Israel marked Holocaust Remembrance Day on Sunday evening with ceremonies and events throughout the country, honoring the memory of six million Jews murdered by the Nazis.

An additional ceremony was held at the Massuah Institute for Holocaust Studies in Kibbutz Tel Yitzhak. and was attended by dignitaries including Justice Minister Tzippi Livni and IDF Chief of Staff Benny Gantz. 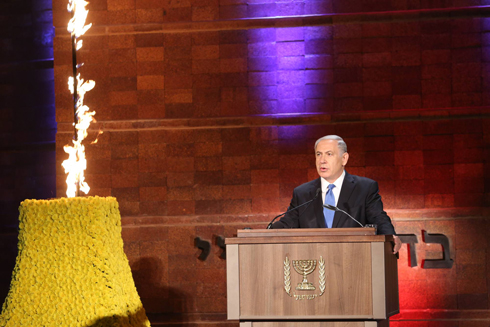 Holocaust Remembrance Day is dedicated to honoring the memory of the Holocaust inflicted on the Jewish people by the Nazis and their accomplices and to acts of heroism and defiance against the German forces. This year's focus is "1944: From Extermination to Liberation" – the Jews' situation exactly 70 years ago.

Speaking at the Holocaust Remembrance Day, President Shimon Peres said: "The victims are alive in our hearts. Each one of us carries in his heart the grief of our brothers who were exterminated, as (we remember also) the greatness of the establishment of Israel." Peres further said: "We mustn't ignore any type of anti-Semitic phenomena, any desecration of a synagogue or smashing of a tombstone. We must also not overlook the rise of extreme right-wing parties with neo-Nazi leanings that are a danger for everyone and a warning for every nation.

"The state of Israel is the deterrent against the attempt to carry out another Holocaust. A strong Israel is our answer to the terror of anti-Semitism."

Netanyahu: Today we are strong

Prime Minister Benjamin Netanyahu wondered whether the world had learned the lessons from the Holocuast.

"Why didn't they see the truth? They didn't want to deal with the consequences. They hoped to avoid a conflict at any price, and that's how they laid the ground for the worst war in human history.

"They assumed the hateful rhetoric was meant for political purposes in domestic consumption. The price of the illusions, of the wishes, was heavy. By the time Western leaders decided to act, their nations had paid dearly."

"Iran wants a deal in which the sanctions are lifted, but the nuclear capabilities remain. A deal that allows Iran to remain on the threshold of nuclear power will leave the entire world on the precipice.

"I call on world powers to stand firm on the demand Iran dismantle its nuclear program.Today we do not fear making our case to presidents and prime ministers. Unlike during the Holocaust, when we were defenseless, today we have the power to defend ourselves."

At the ceremony at Tel Yitzhak, Justice Minister Livni said: "The Jewish people has gone through a transformation: From a yellow badge in the shape of a Star of David to a Star of David engraved in the metal that went into the making of Air Force aircrafts, tanks and IDF ships." 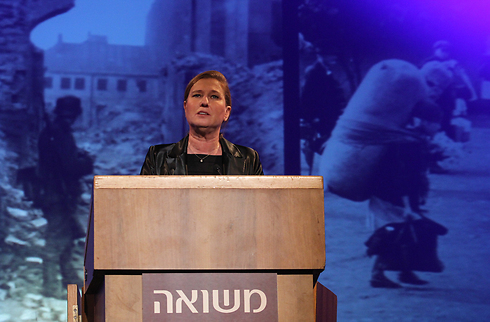 Livni further said: "Israel of 2014 is still a threatened country, and there are those who refuse to acknowledge our existence and work to remove us from the world map, but Israel is an independent country, and is strong enough to cope with the threats."

Gantz: IDF proof of our strength

IDF Chief of Staff Lt.-Gen. Benny Gantz, who also spoke at the Holocaust memorial service in Kibbutz Tel Yitzhak said: "The IDF is the proof of the revival of the Jewish people and its move to independence."

Gantz added that "in the time the Jewish people struggled to survive in Europe, they sowed the seeds of optimism. They taught one another bravery to stand up and fight the Nazis. The legacy they left is the lighthouse guiding our way."

On Monday morning, a two-minute siren will be sounded at 10 am, and immediately after that, a wreath-laying ceremony will commence at the Warsaw Ghetto Square in Yad Vashem. At 10:30 am the reading names of the Holocaust victims will begin. It will be followed by the main remembrance ceremony at Ohel Yizkor at 1 pm.

Tel Aviv will hold a remembrance ceremony at the Cameri Theater, titled "1944 – Jews t the Finish Line, From Extermination to Liberation". The ceremony will be screened live via a wide screen at the Tel Aviv Performing Arts Center. A 'Singing and Remembering' event will take place at 9 pm on Sunday at the Gerard Behar Center in Jerusalem and at 08 am Monday, the ceremony "1944 – On the Brink of Liberation" will take place at Safra Square in the capital. The main Remembrance Rally to mark the end of the Holocaust Memorial Day commemorations will be held on Monday at 7:30 pm at Kibbutz Yad Mordechai in the presence of Defense Minister Moshe Ya'alon, Opposition leader Isaac Herzog, IDF senior commanders and Hungary's ambassador to Israel. International Holocaust Remembrance Day is marked worldwide on Jan. 27, the date of the liberation of the Auschwitz death camp. Israel's annual Holocaust memorial day coincides with the Hebrew date of the Warsaw ghetto uprising.

Six Holocaust survivors, representing the six million victims, will light torches in memory of people who did not survive at the hands of the Nazis, at the main ceremony at the Warsaw Ghetto Square in the Yad Vashem Holocaust Museum.