Rabbi Pinchas Goldschmidt. 'We must speak out when human life is treated with contempt'
Photo: Conference of European Rabbis

Conference of European Rabbis calls on world leaders to unite in condemnation against mass death sentence imposed by Egyptian court on 683 members of radical Islamic organization.

STRASBOURG – The Conference of European Rabbis (CER) has issued a surprising statement in support of the Muslim Brotherhood movement and against the Egyptian court which sentenced 683 of its members and their leader, Mohammed Badie, to death for incitement to violence. The standing committee of the CER, which met for its semi-annual meeting in Strasbourg, France, said in the statement that the hundreds of Muslims had not received a fair trial for their part in the violent events which took place during the ouster of Egyptian President Mohamed Morsi and that the international community was therefore expected to unite in protest against the collective punishment.
Rabbinical Conference
European rabbis vow to block 'anti-Semitic legislation'
Kobi Nachshoni
Standing committee of Conference of European Rabbis meets at seat of Council of Europe in Strasbourg, calls on continent's leaders to protect Jews' religious rights.
European rabbis vow to block 'anti-Semitic legislation'
CER President Rabbi Pinchas Goldschmidt explained that "just as religious leaders have a collective responsibility to speak out against the strain of political and religious extremism often epitomised by the Muslim Brotherhood in Egypt, so too, we must speak out when human life is treated with such astonishing contempt. "Every human being, no matter what their crime, should have the right to a fair trial," he added, "and the nonchalance with which this mass death sentence has been handed down should unite world leaders in condemnation." Goldschmidt noted that the opposition to the death penalty in general was one of the principles of the European Union which hosted the conference at its institutions in Strasbourg.

The CER's standing committee also addressed Israel's internal affairs, expressing its objection to the proposed law to merge the dual chief rabbi positions. The rabbis called on Religious Services Minister Naftali Bennett and Justice Minister Tzipi Livni, who are leading the initiative, to shelve it, although it has already been approved by the Ministerial Committee for Legislation Affairs and has the coalition's support ahead of its final approval. 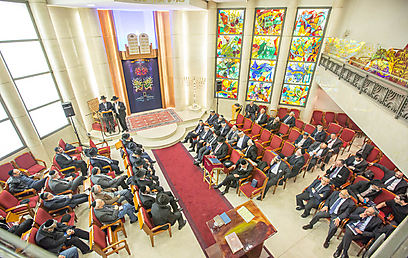 Conference of European Rabbis' standing committee meets in Strasbourg (Photo: Eli Itkin)
The rabbis explained that the halachic law that "matters of holiness can only be increased rather than reduced" requires the continuation of the current situation, in which an Ashkenazi chief rabbi serves alongside a Sephardic chief rabbi. The move's supporters argued, however, that the expected changes in the Rabbinate were technical and not fundamental and did not require the intervention of Diaspora rabbis in Israel's internal political affairs. The objection to the bill was eventually approved with a majority of votes. Knesset Member Elazar Stern's "conversion bill" was also discussed, but the rabbis decided not to present a unified opinion on the matter for now. Rabbi Goldschmidt called on the rabbis not to engage in the conversion of a person who was rejected in the past by a different rabbi or religious court. The European rabbis will set up an ethics committee to supervise the issue.

In another session, Ukraine's Chief Rabbi Yaakov Bleich reviewed the situation in his community on the backdrop of the conflict with Russia. He said the Jews had become a pawn in the hands of both sides, each seeking their support, and that as a result they were being harassed – both in the form of authentic anti-Semitic acts by locals and in Russian acts of provocation which are seen as hate crimes.

An exciting moment was recorded during the rabbis meeting with heads of the Council of Europe's Parliamentary Assembly, which voted against male circumcision about six months ago, when its secretary general Wojciech Sawicki revealed that his father was Jewish. Rabbi Goldschmidt later told Sawicki and the Parliamentary Assembly's President Anne Brasseur that the anti-circumcision decision "reeked of anti-Semitism." He said that although the two of them were not in their current positions when the decision was made, it was now their duty to protect Jews' basic rights in the continent. "Discussions have indeed been held since then in the Council's different institutions," he noted. "We have received the support of more than 100 members of the Parliamentary Assembly and minister of the Council of Europe, but unfortunately the decision has yet to be annulled." Brasseur and Sawicki said in response that they would speed up the matter until the cancelation of the declaration that male circumcision violates the child's right.