Anti-Semitic sign labeling Riga pre-school as 'free of Jews' may be connected to member of parliament.

A sign hangs in the heart of Riga, capital of the eastern European country of Latvia, that labels a pre-school as "Judenfrei" (free of Jews), a saying often used by the Nazis to describe an area whose Jewish population had been removed.

Local media sources recently uncovered that the preschool is owned by the family of Imants Parādnieks, a member of Latvian Parliament representing the National Unity Party that's been accused for anti-Semitic sentiments and identifies with the country's historical period under the control of the Nazis.
Anti-Semitism
Internet attacks against Czech Jews on rise
Associated Press
Though annual report suggests a rise in Internet anti-Semitism, Czech Republic compared with other countries is relatively 'quiet.'
Internet attacks against Czech Jews on rise

According to local reports, the sign was hung at the entrance of the preschool on the morning of May 6, just two days before VE day celebrating victory of the Nazis in WWII.

According to the Russian website Regnum, a passerby who saw the sign alerted the police last week.

The preschool already made headlines under questionable circumstances in March 2012 when it was reported that two men dressed in SS uniforms came to give the children a lesson in "patriotic education." 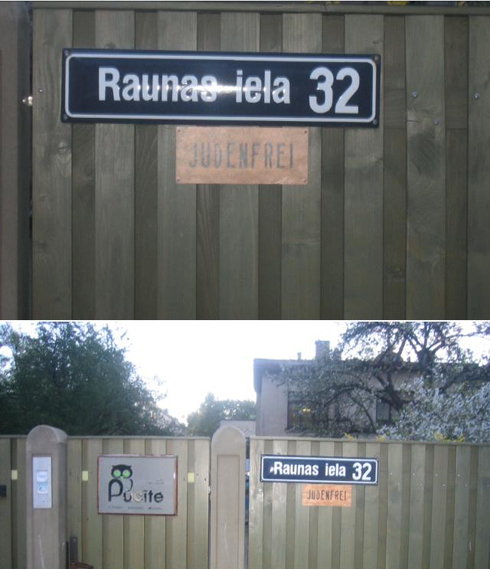 The entrance to the pre-school in Riga.

The reports claimed that the men show the kids military weapons and spoke with them about military service.

According to the Latvian website Kompromat, the sign was hung on the same day that Rabbi Pinchas Goldschmidt, the President of the Conference of European Rabbis, visited Riga to march in memory of 70 thousand out of 80,000 Latvian Jews who died in World War II. The journalist who found the story was Natalia Vasiliev, a news anchor at the First Baltic Channel network. She posted photos of the entrance to the pre-school on her Facebook page and wrote, "Tell me, in what other countries in the European Union can something like this happen... People who watch my television show and turned to the police did the right thing." Head Rabbi of Riga's Jewish community, Menachem Barcohen, told Kompromat that he doesn't believe that Parādnieks is behind the anti-Semitic sign, because according to him, putting up such a sign, especially so close in time to ceremonies remembering the Holocaust, would be political suicide. The rabbi of the Riga Chabad house, Mordechai Glazman, told Ynet that the Jewish community hadn't been aware of the sign. "I only know about this because somebody from Israel sent me a news article about it."

"I wouldn't say that Parādnieks is a supporter of Jews, but I read that he claims that someone else put up the sign," said Goldman.

When asked if the Jewish community was disturbed by the incident, Goldman replied, "No one even knew about it and no one's talking about it."

Alex Tenzer, a Kiev-born Israeli who heads the National Association of Immigrants from the former USSR, says anti-Semitic incidents occur in the former Soviet states on a regular basis.

"Some of the locals to this day view those who volunteered for the SS as heroes," he said. "If Riga police really objects to such incidents, it should find out who is responsible and jail them. We must not let this pass quietly."