Gabriel Diaz hits back at critics, saying he has right to display his National Socialist beliefs: 'I'm critical of Jews, but that doesn't mean I'm anti-Semitic.'

A New York City cab driver, who was suspended for wearing a Nazi armband while driving his taxi, insisted on Friday that he has a right to display his National Socialist beliefs.


During an interview with CBS New York, the 26-year-old Gabriel Diaz proudly admitted being a “National Socialist – what you guys call a Nazi.”

Diaz told CBS that being a National Socialist did not make him an anti-Semite. “I don’t hate Jews. I’m critical of them, but I don’t hate them. That doesn’t mean that I’m anti-Semitic. That don’t make me a hater,” he said. 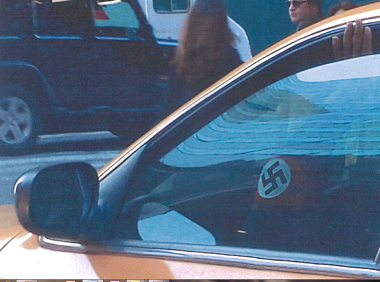 Photo sent to the Anti-Defamation League of Diaz wearing Nazi armband (Photo: ADL)
But when asked whether he knew that 6 million Jews were exterminated by the Nazis, Diaz refused to comment saying only that he believes “we have been told lies about Hitler our whole lives.” While it is not illegal to wear a swastika on the streets of New York, it is against the law to wear one while driving one of the city’s infamous yellow cabs.

Diaz was suspended by the Taxi and Limousine Commission for thirty days after pleading guilty to violating its employment rules. 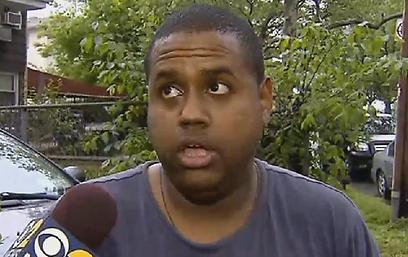 Cab driver Gabriel Diaz
The Anti-Defamation League, which had complained to the Commission after receiving pictures of Diaz wearing the armband from the public, applauded the decision, saying “in disciplining the driver, the TLC sends a powerful message that such a vehement demonstration of hate is unacceptable.” The ADL’s Evan Bernstein also commended the quick response of the regulatory agency. “Their course of action, we felt, was really appropriate and expedient. Hopefully, (Diaz) realizes this is wrong. Hopefully, he learns from this mistake.”

But the cab driver expressed no such remorse. “It paints me that I have to apologize. You know, it pains me. I don’t want to apologize. Why don’t they suspend a Muslim for wearing a turban?”

The cab driver, however, promised to leave the swastika apparel at home when he returns to his work.