US to Israel: Investigate killing of Palestinian teens

Following release of footage documenting killing of two Palestinians near Ramallah, US State Department spokesperson says US expects Israel to 'conduct a thorough and transparent investigation'.

The US government called on Israel to open an investigation on Tuesday into the circumstances surrounding the deaths of two Palestinians in Beitunia, during a protest last week.

"We're closely tracking the event and ask for additional information from the Israeli government. We expect the Israeli government to conduct a thorough and transparent investigation, to verify the facts, including whether there was a proportional threat by the protesters," said US State Department spokesperson Jen Psaki at a press briefing in Washington on Tuesday evening, after footage was released earlier in the day by rights group B'Tselem that documents the incident.

“We express our condolences to the families of the deceased and urge all parties to express restraint," the American spokesman added.

Earlier Tuesday, Defense Minister Moshe Ya’alon defined the event as "violent, during which Molotov cocktails and stones were thrown at border police officers who felt that their life was threatened, and acted accordingly."

He said he had not seen the video, but alleged the images had been manipulated through editing.

UN Assistant Secretary-General Oscar Fernandez-Taranco told the Security Council's monthly Mideast briefing: "It is of serious concern that initial information appears to indicate that the two Palestinians killed were both unarmed and appeared to pose no direct threat."

At issue is a clash between Israeli troops and Palestinian stone-throwers May 15 near the West Bank town of Beitunia, a few hundred meters from an Israeli military base, Ofer. On that day, Palestinians marked the anniversary of their uprooting in the war over Israel's 1948 creation by holding marches and protests in the West Bank and Gaza.

Starting around midday, several dozen Palestinian youths burned tires in a main street and threw stones toward Israeli troops, according to witnesses and B'Tselem.

The security footage first surfaced late Monday when a local advocacy group, Defense for Children International Palestine (DCI), released excerpts that it said showed the two fatal shootings. B'Tselem later obtained the unedited footage, and said there was no indication the images had been tampered with. 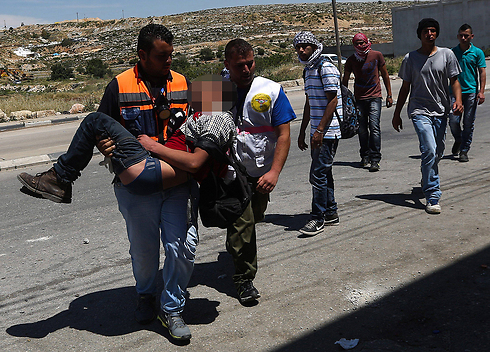 One of the wounded protesters carried away during Nakba Day protests. (Photo: EPA)

Faher Zayid, an eyewitness to the incident said in the video posted by DCI that "one of the teenagers was shot when nothing around him happened and no stone was thrown. The army fired a lot of tear gas, and the teenagers pulled back. Later, they returned to the spot and suddenly one of them was shot and he collapsed to the ground."

Zayid, who said he witnessed the confrontation from his balcony, added that he "heard four live rounds, three people were wounded from the gunfire." He added that he believes the shots came from the eastern direction of Israel's Ofer prison near the West Bank city of Ramallah.

The video shows, the group said, that troops committed "unlawful killings where neither child presented a direct and immediate threat to life at the time of their shooting".

In the first incident, clocked by the time stamp at 1:45 pm, a figure with a backpack walks from the left side of the street toward a group of Palestinians standing near a building wall on the other side. Suddenly, the figure falls to the ground. Those near the wall rush to him and he is carried away.

There was sporadic stone-throwing for several minutes before the incident.

In the second incident, clocked at 2:58 pm at the same location, a Palestinian walks from the wall toward the middle of the street. After a few steps, he falls to the ground. There was no stone-throwing at the time.

The security camera video does not show a source of gunfire or a shooter in either incident. The bodies of the slain teens were taken to Ramallah Hospital.

The head of the emergency department, Dr. Samir Saliba, said at the time that both were killed by live fire to the upper body. He said Nawara was shot in the chest and the second teen in the right side of his back. A third Palestinian was shot and seriously wounded in the chest, Saliba said.

Nawara's family said it retrieved his backpack with a bullet hole and a spent bullet. The family said it has not decided whether to hand over the bullet to military police investigators.

B'Tselem noted that army rules of engagement bar the use of live rounds at a time when the lives of soldiers are not in danger. Michaeli, the rights group spokeswoman, said the investigation "indicates that the soldiers fired live ammunition at the upper bodies of these youths in conditions where there was no feasible justification for using lethal force against persons."

Michaeli said the circumstances "raise the suspicion of willful killings."

B'Tselem and other human rights groups have alleged that Israeli troops often use excessive force in putting down Palestinian stone-throwing protests.

Bill Van Esveld, a local researcher of the New York-based Human Rights Watch, said the incident "certainly fits into a pattern." He said that in cases of fatal shootings he has monitored, "there are more than a handful of cases where live ammunition has been used without any apparent justification."

"We are charged with and committed to safeguarding human life and we address the threats with necessary force when required," he said.

Lerner said military police carries out investigations and after-action reviews "in any activity we carry out." He said an investigation into the deaths of the two Palestinians is continuing.