US citizen among missing teens in suspected West Bank kidnapping

Senior security officials have informed US Ambassador to Israel Dan Shapiro that one of three teenagers missing in the West Bank has American citizenship. The ambassador was notified after defense officials met with Prime Minister Benjamin Netanyahu in Tel Aviv on Friday to discuss the security situation in light of the possible abduction.

The three youths, all aged between 17 and 19 and all yeshiva students, disappeared late Thursday night between Kfar Etzion and the settlement Alon Shvut, southwest of Jerusalem.

The Shin Bet and the IDF's Central Command are treating the teens' disappearance as a terrorist kidnapping, given that, among other things, their cell phones stopped broadcasting GPS signals from the location where they were last seen.

Security forces have been scanning the Bethlehem and Hebron areas, while police were checking a link between a burnt-out car that was discovered near Hebron and the disappearance of the teens. Large numbers of security forces were also searching open areas in Gush Etzion - on foot, by car and using advances observation devices. 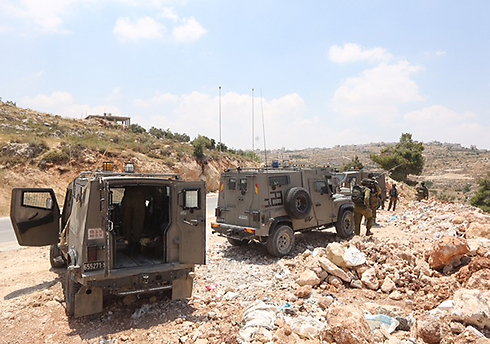 The IDF has luanched an extensive hunt for the teens (Photo: Gil Yohanan)

Palestinian news agency Ma'an reported that IDF troops were combing southern Hebron. According to the report, the army set up roadblocks in various locations, and IDF forces raided some houses and made several arrests. At the same time, Israeli drones were reportedly seen flying over the southern part of the Hebron Hills. The IDF has also confirmed that unmanned aerial vehicles have been deployed in the search.

Searching for the teens

Meanwhile, roadblocks were set up on southern Israeli highways in order to prevent the potential transfer of the youths to Gaza, which would greatly complicate any possible rescue attempt, either military or political.

The IDF was looking into whether the teens tried to hitch a ride in the Etzion area, not far from the Gush Etzion junction, an area where many settlers hitchhike, despite army warnings and repeated alerts on terror organizations planning to commit a kidnapping.

In recent weeks, the Shin Bet uncovered several attempts by terror cells to kidnap Israeli soldiers or civilians in order to use them as a bargaining chip to secure the release of Palestinian prisoners in Israeli jails.

Israel has blamed the reconciliation between Palestinian factions Hamas and Fatah for the suspected kidnap.

"This event is a direct continuation of escalation in Judea and Samaria since Abu Mazen (Palestinian President Mahmoud Abbas) allowed the terrorist organization Hamas to join the Palestinian government," a senior source said after the meeting with Netanyahu on Friday. 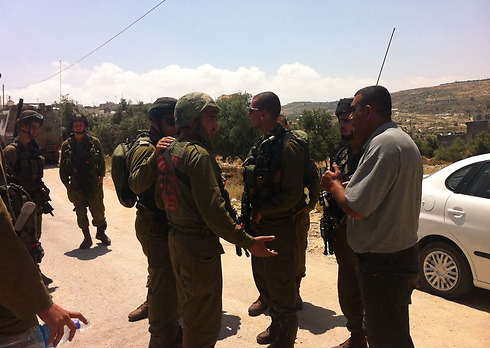 IDF forces in the Bethlehem and Hebron in search of the two teens (Photo: Tazpit News Agency)

The IDF has asked the public not to believe rumors the IDF had broke into a home and rescued two of the teens, a claim that the spokesman denied.

"I'm asking everyone to behave responsibly. There's no significance to rumors that have been spreading," said an IDF spokesperson.

IDF Chief of Staff Benny Gantz has instructed all relevant army units, including a unit dealing with hostage situations, to raise their level of alert and prepare for any scenario. 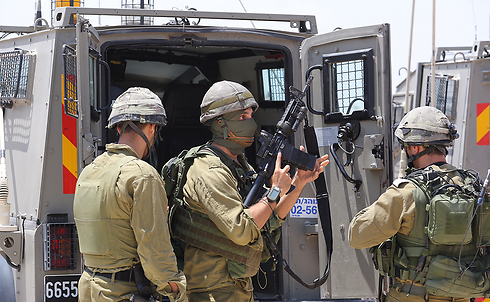 "The goal is to figure out what happened before they disappeared, to investigate our way backwards. So far, we haven't found any items belonging to the two out on the field," a senior army source said.

He added that the search was now focusing on the intelligence front, and that the IDF, Police and Shin Bet were holding a situation evaluation every few hours.

A relative of one of the missing teens said the families were being updated by the IDF and police about the disappearance.

"He just disappeared, never made it home," the relative said. "His parents are worried, praying, hoping for the best. We're all praying this incident ends in a good way."

The spokesman for a settlement in which one of the missing teens resides said that his father had reported him missing during the night when he failed to return home and didn't answer his phone. At the same time, family members began searching for the teen at his friends' houses.

"At 8 am we got texts. We were asked if we knew where the boy was and to wake up our children to see if he was staying over at one of the homes," the spokesman said.

At first the family members thought the teen had just forgotten his keys and went to sleep at a friend's house, as he had done before.

"As soon as we realized he was nowhere to be found, the atmosphere in the settlement became very grave. People were hiding in their homes... we opened an operations room to provide residents with information, and organized a mass prayer and read from the Book of Songs so this incident ends on a good side," the spokesman continued.

The spokesman added that yeshiva students often make the journey from Alon Shvut to the Gush Etzion junction and from there to Jerusalem, and onto the settlement via Shiloh junction.