Israel in touch with US, PA as hunt for missing teens continues

Israeli security officials were in touch with Palestinian Authority counterparts on Friday as part of a massive manhunt for three Israeli teens who went missing in the West Bank on Thursday night.

Justice Minister Tzipi Livni, who is in London for an international conference on war crimes, held talks with US Secretary of State John Kerry about the disappearance of the teens, one of whom holds American citizenship, and asked him to push the PA to work for the release of the three. 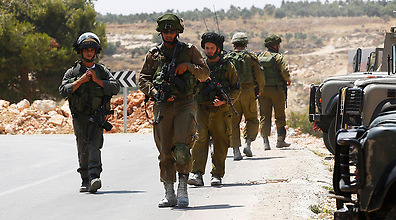 IDF troops searching for the missing teens in the West Bank (Photo: Reuters)

A senior official at the State Department said Friday that Kerry had discussed the issue with Palestinian President Mahmoud Abbas, and had afterwards spoken to Prime Minister Benjamin Netanyahu. The prime minister said earlier Friday that Abbas was responsible for the safe return of the three, and blamed the formation of the new Palestinian unity government for the situation.

"We are following the reports and are very concerned for (the teens') safety," said the official. "We are working with the Israeli government and Palestinian Authority in order to reach a speedy conclusion and reunite the three youths with their families." The US is supporting full cooperation between the two sides, he added.

Foreign Minister Avigdor Lieberman, who is currently on a tour of Africa states, has received updates on the situation from the prime minister and defense chiefs.

Meanwhile, a member of the Fatah Central Committee, Mohammed Madani, on Friday evening denounced Netanyahu for his rhetoric blaming the PA for the suspected abduction.

"Israeli efforts should focus on finding the three youths instead of spreading blame and placing responsibility on a great number of factors," said Madani, who has responsibility for contact with the Israel public. "Netanyahu placing blame on the PA is incitement and cheap exploitation given that there is no justification for this, and aims to score political points."

He added that, "The PA has in the past returned dozens of Israelis who mistakenly entered the West Bank. We greatly hope that these youths will be returned safely home. The Palestinian security establishment is making every effort to help find the youths."

A Hamas online forum on Friday night carried the claim that the al-Qaeda linked Islamic State in Syria and the Levant (ISIL) were responsible for seizing the three youths.

"Praise be to Allah, through him our Jihad fighters managed to abduct three Zionist settlers in Hebron in the occupied West Bank," a statement on the forum said. "The action was an initial response to the assassination of Hebron jihad fighters Mohammed Nuriah, Mahmoud a-Najar and Moussa Muh'amra and as part of attempts to free the priosoners from the occupation jails." The validity of the claim could not be verified, however.

IDF Spokesman Brig. Gen. Motti Almoz told reporters at a short briefing Friday night that he had no further information on developments.

"I am coming here from a General Staff situation assessment to update the chief of staff on the direction of operations," Almoz said.

"Due to the sensitivity of the intelligence, I cannot divulge intelligence information. The IDF and the entire defense establishment, Military Intelligence and Shin Bet are doing everything they can to get the boys back. Operations in Judea and Samaria requires sensitive intelligence, I call on everyone to be patient. "