World leaders were unanimous Wednesday in condemning the killing of Mohammad Abu Khdeir, a 16-year-old Palestinian who was most likely kidnapped and murdered in revenge for the death of three Israeli teens that were abducted and recently found dead in the West Bank. The White House spokesperson said the death of the Palestinian teenager was a "heinous murder" and called on the perpetrators to be brought to justice. 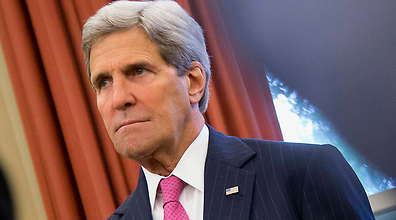 Photo: AP
In a series of posts on Twitter, National Security Adviser Susan Rice said the US is paying close attention to the investigation into the death of 17-year-old Mohammed Abu Khdeir. She also offered condolences to his family and the Palestinian people.

US Secretary of State John Kerry also condemned the murder, calling the act "sickening" and saying, "There are no words to convey adequately our condolences to the Palestinian people.

"Those who undertake acts of vengeance only destabilize an already explosive and emotional situation. The world has too often learned the hard way that violence only leads to more violence and at this tense and dangerous moment, all parties must to everything in their power to protect the innocent and act with reasonableness and restraint, not recrimination and retribution."

Quartet Representative Tony Blair also commented on the killing saying, "There is no possible justification for such a horrendous act - and the perpetrators must be found swiftly and brought to justice. Extremists must not be allowed to exploit the events of the last weeks to spark a further escalation in violence."

"The fanatics must be sidelined," Blair stressed. "The Israeli and Palestinian leaders must continue their pursuit for a negotiated settlement that will bring about peace and security for their citizens."