The six men arrested for the kidnap and murder of 16-year-old Mohammed Abu Khdeir attempted to kidnap a 9-year-old boy a day earlier, their investigation revealed. Meanwhile, one of the six men confessed to the allegations, and incriminated his fellow suspects.

In a joint statement, police and the Shin Bet said the suspects were arrested early Sunday. They remained in custody and were being interrogated by the Shin Bet.

According to the investigation, the Jewish suspects attempted to kidnap the 9-year-old boy while he was walking in the street with his mother and brother in the Jerusalem neighborhood of Beit Hanina. 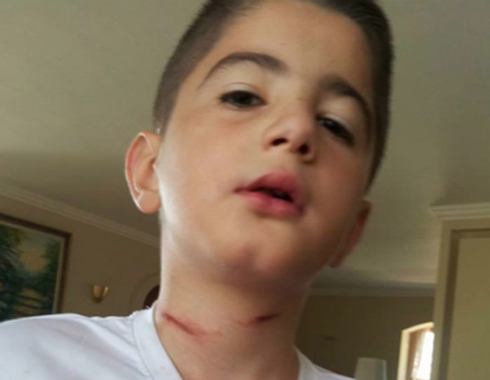 It was further revealed that the vehicle in which the suspects were riding stopped near the mother and attempted to force the child into the vehicle. The mother struggled with the kidnappers and the boy, Mussa Zalum, managed to escape. Bystanders then arrived at the area and the driver fled the scene.

The official described the suspects as young males, including several minors, and said they came from Jerusalem, the nearby city of Beit Shemesh, and Adam, a West Bank settlement near Jerusalem.officials said Sunday they believed the killers acted on nationalistic grounds.

Petach Tikva Magistrate Court extended the remand of five of the six suspects by eight days, although the police had asked for a period of 15 days. The sixth suspect’s remand was extended by five days.

The six suspects are suspected of affiliation with a terror organization, membership in an illegal movement, murder of a juvenile, criminal conspiracy, possession of weapons and ammunition and conducting a racially motivated crime.

The investigation revealed that the murder of the Palestinian teen by the suspects was premeditated, and that they had arrived at Beit Hanina last Wednesday early in the morning and kidnapped and murdered Abu Khdeir.

The main piece of evidence is the vehicle used by the suspects for the kidnapping, which police located, and that was also captured by security cameras in the area.

Prime Minister Benjamin Netanyahu sent his condolences to the family of the Palestinian teen who was kidnapped and murdered at the hands of Jewish extremists in response to the murder of the three missing Israeli teens who were presumed to be murdered.

"I wish to send my condolences to the family of the teen and promise them that we will find those behind this horrific crime and bring them to justice. There is no place for such murders in our society," the prime minister said.

Finance Minister Yair Lapid slammed the murder, saying "we must all feel shame at the new recent events."

"Israel cannot allow itself to stay quiet in face of the murder of a young innocent Arab youth at the hands of Jewish murders.

"We cannot differentiate between blood and blood. Radicals' attempts to take the law into their own hands harms the social fabric of Israeli society, our international interests and our attempts to fight terror."

Economy Minister Naftali Bennett also commented on the arrests, and said a new law which bars terrorists from parole will also apply to the boy's killers.

"We will demand the Terrorist Law we put forward be applied to the boy's killers," Bennett said, calling the murder "heinous" and decrying it as "anti-moral and anti-Jewish."