Netanyahu: I am exploring all options to restore calm

IDF chief says army ready for ground offensive, awaiting orders; Hamas is 'understanding it has made a big mistake.'

Restoration of calm for the Israeli people is my first priority, Prime MInister Benjamin Netanyahu said Friday evening, adding that he would do everything necessary to end the days of rocket fire from Gaza that have plagued communities in the south and center of the country.

"The Israeli people know that my first consideration is to restore calm," the prime minister said in a pre-Shabbat address to the population. "I will do everything necessary to achieve this objective."

Netanyahu said that he had spoken in recent days to a range of world leaders, including US President Barack Obama, German Chancellor Angela Merkel and Russian President Vladimir Putin.

Netanyahu did not explicitly mention an anticipated IDF ground operation into Gaza, but said that the country's leadership was "preparing for every possibility."

Meanwhile, IDF Chief of Staff Benny Gantz said earlier Friday that the military was ready for a ground offensive, and was onlyh awaiting instructions from the political leadership.

"Nothing is stopping us from moving forward," Gantz said during a tour of a Paratroopers training base. "The IDF is not waiting for the last straw to go on a ground offensive, it's waiting on political instruction."

Terrorists "in Gaza are understanding that they've made a big mistake. In four days we've been intelligently using our offensive means while remembering that there are civilians there that Hamas has turned into hostages," Gantz said. "Gaza is slowly sinking to its doom."

The chief of staff noted that "the air offensive is excellent and we have intelligence that works. We have what to attack, and we will intensify the attacks. We've yet to exhaust our offensive capabilities."

Gantz went on to say that "strategically, Gaza needs to choose whether it's heading for a calm or to a security catastrophe." 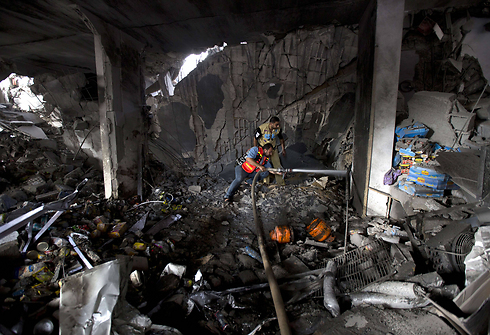 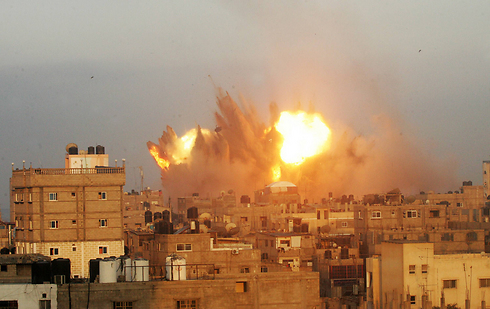 IDF attack in Rafah in the southern Gaza Strip (Photo: AFP)
On the threat from Hamas, Gantz said, "Hamas has been getting stronger over the years. Thousands of rockets were hit (in IDF attacks) and they tried to fire hundreds of rockets and were unsuccessful, while dozens were intercepted."

The IDF chief also stressed that "the Iron Dome cannot provide complete protection" and cautioned that this military campaign must be viewed "in a level-headed, non-hysteric manner." 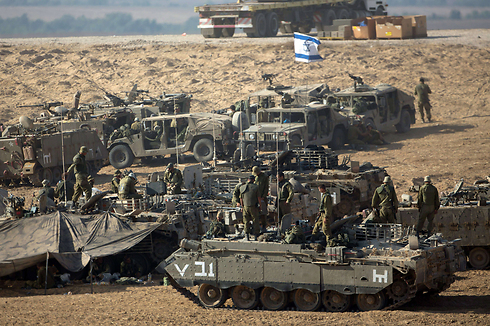 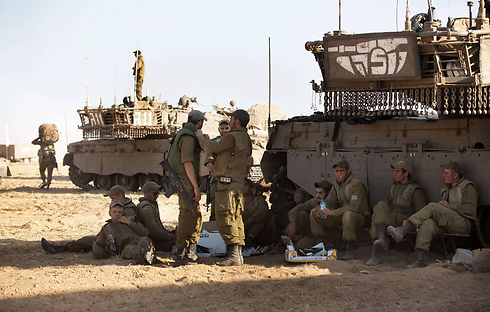 Armored Corps soldiers on the Gaza border (Photo: AFP)
The IDF has been preparing for a possible ground offensive, calling in reserves and amassing troops on the Gaza border. This ground offensive could happen within the next 36 hours. The army believes a ground campaign could lead to a lot of achievements and to an extensive blow to Hamas' infrastructure, mostly in places where the army and Shin Bet have no intelligence on.

One of the main options being considered is a limited and focused ground offensive that includes ground forces, engineering forces and armored corps.

Prime Minister Benjamin Netanyahu said in a televised statement on Thursday: "So far the battle is progressing as planned, but we can expect further stages in future. Up to now, we have hit Hamas and the terror organizations hard and as the battle continues we will increase strikes at them."

Netanyahu discussed options with his security cabinet as new air strikes were launched and officials hinted at a ground offensive. There was no word on when or if this might happen.

Israeli leaders have appeared to hint at a possible invasion by ground forces and some 20,000 army reservists have been mobilized, giving them the means, if they choose, to mount a land offensive.

The last time they undertook such an offensive was in early 2009 during Operation Cast Lead. Ground troops did not cross into the Strip, one of the world's most densely populated territories, during the last major exchange of rockets and missiles in the 2012 Operation Pillar of Defense.

"We have long days of fighting ahead of us," Defense Minister Moshe Ya'alon said.

Hamas spokesman Sami Abu Zuhri sounded a defiant note, when asked about Yaalon's remarks. "Our backs are to the wall and we have nothing to lose," he said. "We are ready to battle until the end."

Deputy head of the Hamas political bureau and executive organization in Gaza, Ismail Haniyeh, spoke to Palestinian media Friday saying, "We aren't afraid from the enemy's threats. The blood of the leaders is no more important than the blood of the children and families."

He addressed Israel and said, "Stop your war crimes against our people because your aggression will fail to achieve its objectives. Our people will be victorious no matter the number of victims or the number of threats... Our people are united and support the resistance in an unprecedented manner."

“What are you trying to achieve by sending rockets?” Abbas asked on Palestine TV, without explicitly naming Hamas. “We prefer to fight with wisdom and politics.”