Demonstrators protest against action taken by Israel in Gaza near Israeli embassy in Londo
Photo: Reuters

Thousands of pro-Palestinian demonstrators turned out on the streets of London and Paris on Friday to call for an end to Israeli military strikes on Gaza.

Several thousand people crowded the streets outside the Israeli Embassy in west London, waving placards that read "Gaza: End the Siege" and "Freedom for Palestine."

The crowds blocked an entire road, and several protesters managed to climb on top of a double-decker bus stuck in traffic, but police said the protest was largely peaceful. 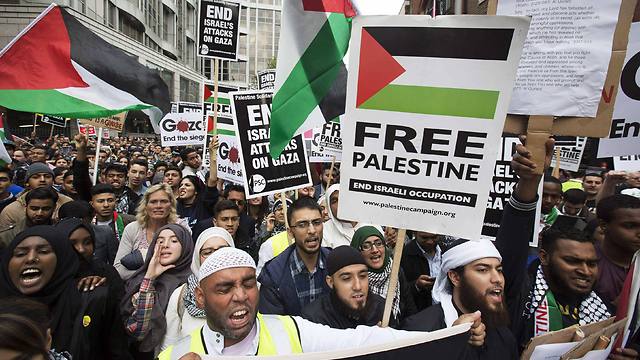 Demonstrators protest against action taken by Israel in the Gaza strip near Israeli embassy in London (Photo: Reuters)
A smaller protest took place in Paris Friday, where about 100 people demonstrated near the French Foreign Ministry. Demonstrators waved Palestinian flags. One woman shouted "Palestine will survive" had the flag painted on her cheeks. Stephane Frappreau, who identified himself as Jewish, said the demonstrations were about "defending humanity and about stopping the massacre." "I think that people tend to forget that Palestinians are people who are suffering, kids and women, who are dying every day," Frappreau said. "And I think that people shouldn't confuse things or come to quick conclusions, because being against Israel as we are today is not about being anti-Semitic."

France has both Western Europe's largest Jewish community and its largest Muslim population, and the French government has been walking a careful line on the Gaza developments.

President Francois Hollande issued a statement earlier this week in support of Israel that prompted criticism because it failed to mention Palestinian victims.

He later spoke with Israeli Prime Minister Benjamin Netanyau and Palestinian President Mahmoud Abbas, then issued new statements expressing support for each and concern for all victims. He condemned violence and urged a return to peace talks.

More demonstrations were planned for the weekend. In London, a spokeswoman for Prime Minister David Cameron said earlier he supported Israel in the face of attacks by Hamas against Israeli civilians.