The UN Security Council called on Saturday for a ceasefire in hostilities between Palestinians and Israelis and expressed serious concern about the welfare and protection of civilians on both sides.

"The Security Council members called for de-escalation of the situation, restoration of calm, and reinstitution of the November 2012 ceasefire," the 15-member body said in a statement.

Palestinian UN Ambassador Riyad Mansour accused the council of dragging its feet and said Saturday's statement had only been agreed after the Arab Group, the Organization of Islamic Cooperation and the Non-Aligned Movement, threatened to push for a resolution on the issue.

Mansour said that the Palestinians will follow closely to see Israel's response to UN Security Council's call for a ceasefire. Mansour added that if Israel does not respond to the call, "we have many other tools in our arsenal".

Meanwhile, various international mediators were trying to persuade Israel and Gaza's Hamas rulers to abide by a truce agreement that ended the fighting during Operation Pillar of Defense in November 2012.

A spokesman for the Egyptian Foreign Ministry confirmed on Saturday that Egypt was working with Quartet envoy Tony Blair to mediate a ceasefire. The confirmation came hours after Ynetnews reported that Egypt and another Arab nation, most probably Qatar, were working on an initial draft of a cease-fire between Israel and Hamas, which was presented to both sides Saturday.

Also on Saturday, British Foreign Secretary William Hague said he will meet with US Secretary of State John Kerry and his German and French counterparts on the sidelines of Iran nuclear talks in Vienna on Sunday to discuss an international push for a ceasefire.

“It is clear that we need urgent, concerted international action to secure a ceasefire, as was the case in 2012” during the last round of conflict between Israel and militants in the Palestinian coastal enclave, Hague said.

“I will discuss this with John Kerry, Laurent Fabius and Frank-Walter Steinmeier tomorrow (Sunday) in Vienna.”

“I stressed the need for an immediate de-escalation and restoration of the November 2012 ceasefire, our deep concern about the number of civilian casualties and the need for all sides to avoid further civilian injuries and the loss of innocent life,” Hague said.

Hamas had refused to discuss the terms of the cease-fire, while Israel has expressed its willingness to meet to negotiate the details of the deal. 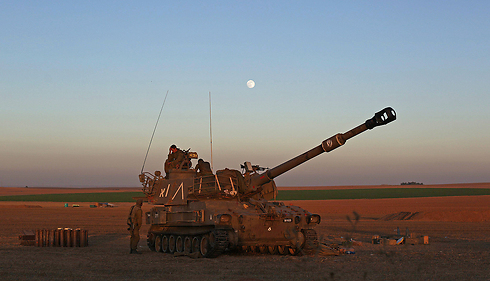 The security aspect includes among other items the demands by Hamas for the release of 56 prisoners who were freed as part of the 2011 Shalit swap deal, but rearrested by Israel during the IDF operation followed the abduction and murder of three Israeli teens in the West Bank last month. They are also demanding the release of the senior Hamas members in the West Bank who were also detained during the same operation, known as Brother's Keeper.

The socioeconomic aspect includes principles reached after the end of Operation Pillar of Defense in 2012, including the expansion of the fishing area off the coast of Gaza, which was recently reduced by the IDF, a reduction in the size of Israel's security perimeter on its border with Gaza, the admittance of building materials into Gaza and the easing of the blockade on the Rafah crossing between Gaza and Egypt.

Hamas at present is refusing to discuss a cease-fire. The organization is still looking for the tangible victory that has so far eluded it, such as heavy damage during a rocket strike on central Israel. It appears that Hamas is even ready for an IDF ground incursion, which would cost it dear, so long as it can present an image of victory to the Palestinian public by the end of the fighting. At the close of Pillar of Defense, this came in the form of a rocket strike on an apartment building in Rishon Lezion.

Israel, for its part, has told those behind the draft that there is a basis for discussion, in particular the socioeconomic sections.