Lieberman: No ceasefire with Hamas in Gaza

Israel has not reached a ceasefire agreement with Hamas in Gaza, Foreign Minister Avigdor Lieberman said Thursday, negating a BBC report that truce talks currently underway in Cairo had come to fruition.

Speaking to a group of diplomats, Lieberman said that "the reports of a ceasefire, are far from representing reality, I spoke with the prime minister, and as of now they are incorrect." 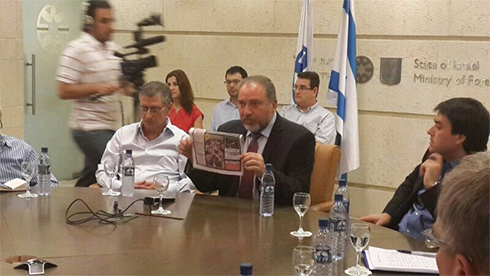 Hamas spokesperson Sami Abu Zuhri said the group "denies" any deal reached regarding an additional calm, saying "the message we sent in our Eshkol operation," a reference to an attempted infiltration into Israel by Hamas terrorists Thursday morning, "is that we are not waiting for the Israelis to come to Gaza, but we are coming to them."

Moshir Al-Masri, a spokesperson for the Islamic Jihad, the second most prominent group in Gaza, also denied the deal, saying "reports of calm between resistance forces in Gaza and the occupation under Egyptian brokerage are Israeli propaganda. He have yet to receive any confirmation (of our demands) from the Egyptian."

According to the initial BBC report, also apparently confirmed to Reuters by an Israeli official, the ceasefire would come into effect 6 am Friday morning.

"There is an agreement for a ceasefire beginning tomorrow. I believe it is six in the morning (0300 GMT)," said an Israeli official, who asked not to be identified. The official said Israeli leaders approved a truce after a senior Israeli delegation held talks in Egypt. Similar comments were made to AFP.

A senior government official said that even though Hamas has agreed to a humanitarian halt in fire, it does not want a ceasefire.

"Israel is in the same situation it was before the pause. We said we wanted calm, then we agreed to the Egyptian proposal. But the other side doesn't want a ceasefire. The other side wants to keep fighting to come out on top," he said.

"Israel wants an agreement that Abbas is a part of and is involved in. At the moment, the Egyptians and Israel see eye to eye on this. Hamas is putting us at a tough spot, where there'll be no other choice. The Egyptians are still playing a part in this, it's not over, and they're trying to advance this, but it's not optimistic," he added.

The BBC report came as Israel and Hamas observed a five-hour humanitarian ceasefire, which began at 10 am Thursday. Fighting raged until moments before the deadline, and three mortars fired from Gaza broke the calm.

In Cairo, the parties convened in different rooms while Palestinian President Mahmoud Abbas met with Egyptian President Abdel Fattah al-Sisi to discuss and end to the fighitng in Gaza.

Azzam al-Ahmed, a Fatah official currently in Egypt with the PA delegation headed by Abbas also denied the reports, and said "as of now we have not reaced a final agreement regarding an end to fighting in Gaza." However, he also said talks were still ongoing.

Israel vowed it would retaliate if Hamas breaks the calm, however it has yet to do so despite the fall of three mortars two hours after the pause began.

Egyptian media reported that Israeli and Hamas delegations arrived at Cairo early Thursday to continue talks on a ceasefire to end the now 10-day-long battle, offering the most encouraging sign yet that the fierce fighting could come to an end. However, as of this story's publication, Ynet learned the team had returned to Israel.

Ynet has also learned that the head of the Shin Bet Yoram Cohen is representing Israel in the talks, with both parties sitting in separate rooms and communicating indirectly through brokers.

Earlier in the week an Egyptian-brokered ceasefire was accepted by Israel, but rejected by Hamas, and thus there were fears the group would also reject the humanitarian lull.

Egypt's foreign minister told the Associated Press that its proposal for a cease-fire between Israel and Hamas is gaining momentum, calling it the only viable way to stop an "intolerable humanitarian situation" in Gaza. "The plan has been widely endorsed by the Arab League, it has been endorsed by the European Union... and it continues to gain momentum in terms of recognition," Sameh Shukri said Thursday in an interview with The Associated Press.

He also expressed frustration that "Palestinian factions" - a clear reference to Hamas - did not share what he described as Egypt's "desire ... to protect the Palestinian people in Gaza" by agreeing to the initiative.

"The only way to protect the people and to avoid additional bloodshed is acceptance of the plan," Shukri said.

"We hope that the five-hour cease-fire that has been declared will be extended and that all sides accept the Egyptian peace initiative which is on the table now for several days," Shukri said.

The plan, announced Monday, requires "unconditional acceptance" of the cease-fire by both sides, to be followed by "unfettered access" to Gaza for humanitarian aid, as well as further talks in Cairo, Shukri said.

The plan was accepted by Israel this week but rejected by Hamas, which said it had never been consulted, a claim Shukri denied.

Egypt "formulated this initiative after very intense consultation which took account of many of the various positions of interest that were expressed by those directly concerned," he said.

Hamas, which seized Gaza seven years ago, wants international guarantees that the territory's blockade by Israel and Egypt will be eased significantly and that Israel will release Palestinian prisoners.

The plan, which includes easing access to Gaza, was accepted by Israel this week but rejected by Hamas, which said it had never been consulted, a claim Shukri denied.

A Palestinian official in Cairo told AP that Marzouk presented Hamas' demands for a cease-fire, which were also delivered to Jordan and the UN They included a desire that countries other than Egypt - believed to be Qatar and Turkey - be involved in forging an agreement to end the fighting, a sign of Hamas' mistrust of Cairo.

Middle East peace envoy Tony Blair also has been involved in talks this week with el-Sissi, and met Thursday with Shukri, who denied reports that the former British prime minister is now formally advising the Egyptian government in a private capacity.

Egypt, which in 1979 became the first Arab nation to sign a peace treaty with Israel, has often served as a mediator between Israel and Hamas.

As the cease-fire began, the Bank of Palestine opened one of its branches in Gaza City's Rimal neighborhood, with hundreds of people lining up to withdraw money.

While both Israel and Hamas said they would respect the pause in fighting, Israel said it would not hesitate to retaliate for any attacks.

"If the humanitarian window is exploited by Hamas for attacks against Israel, we will respond," Israel's chief military spokesman, Brig. Gen. Motti Almoz, told Israeli Channel 2. "If we need to attack we will act without hesitation."

Earlier Thursday Hamas spokesman Sami Abu Zuhri said that following consultations with various factions the Gaza militants had decided to respect the pause as well and would refrain from firing rockets during those hours as well.

Robert Serry, the UN special coordinator for the Middle East peace process, had asked Israel to agree to a "unilateral humanitarian pause" so that the supplies can be delivered to Gaza, said UN deputy spokesman Farhan Haq. Serry will "urge the parties in Gaza to respect that pause," Haq said.

Israel previously had halted its fire for six hours Tuesday after Egypt put forward a cease-fire proposal that unraveled. Abu Zuhri said Wednesday his group had formally rejected the plan, bemoaning what he called little support from the Arab world.

More than 230 Palestinians and an Israeli have been killed in 10 days of cross-border fighting.