Israel is fighting defensive, not offensive, war in Gaza

Analysis: The tunnel infiltration by Hamas early Thursday showed even the most skeptical Israelis that a ground operation is a necessity, not a luxury.

Iron Dome's stellar performance has created the illusion that Operation Protective Edge is an offensive war. We could go to war and we could choose not to, some believed, because the damage on our side has been minimal and there have been nearly no wounded or casualties. So if this operation is not successful, there's no harm done - tomorrow is a new day for a new operation.

But the truth is that the ground operation that the IDF embarked upon on Thursday in the Gaza Strip is a defensive war. And even if it claims lives, it doesn't make it any less justified. 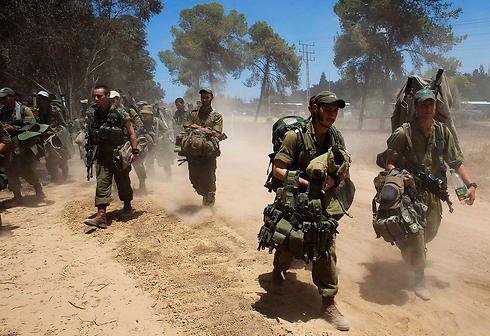 IDF troops on the Gaza border (Photo: Reuters)
The State of Israel could no longer afford a situation in which Gaza rocket launches and the activities of the terror tunnels continue unabated. This is a monster that, without this operation, would have claimed many victims in the future - not just among the Gaza border communities, but throughout southern and central Israel, and eventually would've come up to par with the threat from Sinai. The Hamas that was fairly harmless in June-July of 2014 would've fired shells and rockets and committed raids, killings and kidnappings in June-July of 2015.

For now, the ground operation is advancing as expected and almost without a hitch, similar to how things went during the Operation Cast Lead ground offensive of 2008. Hamas and Islamic Jihad operatives, who heard the roaring of the engines of tanks, APCs, and D-9 bulldozers, fled. Just like in Cast Lead five years ago, the screen of fire and smoke that the IDF put up ahead of the entering troops prevented Hamas, even if it wanted to, from using its anti-tank missiles and remote-controlled explosives. 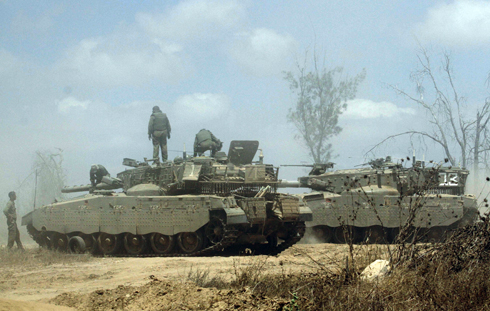 It is a known tactic of guerrilla organizations who "disappear" when their enemy arrives, but pop up all around him as soon as its movement stops. It is then that the enemy turns into a stationary target that is easy to hit. We're not at this point yet, but we will be.

Meanwhile there is quite the hysteria in the Strip. Not just among the non-combatant Gaza civilians, but from Hamas as well, whose messages reek of panic and distress. At the same time, Hamas' political bureau is trying to use the IDF's ground incursion as leverage to change the mediator of a future ceasefire.

They want to get rid of the Egyptian mediator, who is openly hostile to them, and bring in Qatar and Erdogan instead. But this attempt will fail. Israel, Mahmoud Abbas, the Egyptians and the Arab League won't allow for this maneuver.

The one element that is truly infuriating is the Washington administration and, more specifically, the State Department and its head, John Kerry. The warnings he is sending Israel and the State Department spokeswoman's statements on Israel's ground offensive create the impression that Kerry is trying to settle the score with Netanyahu for the recent failure of the peace talks, which the secretary of state initiated and led unsuccessfully.

The problem is that it's the United States that sets the tone in the Arab camp, and furthermore, if Washington is telling Jerusalem off for not sufficiently protecting Palestinian civilians' lives, and urging Israel not to expand the operation beyond finding and destroying terror tunnels - what will they say in Oslo, Stockholm, Paris and Berlin?

The comments coming out of Washington might indicate that Israel has a smaller window of opportunity to complete the ground operation and the destruction of the tunnels than it first believed. The international and regional (Egypt and Jordan) legitimacy is there, but it's eroding fast and won't exist for long.

The Israeli public, however, is showing patience, fortitude and everything else the political and military leaderships could hope for. The infiltration through a tunnel that Hamas committed early Thursday demonstrated even to the skeptics that a ground operation is not a luxury, but a necessity.

It's important to remember, though, that the Israeli public's patience directly correlates with the number of casualties. There's no such thing as a military operation without casualties, and the Israeli public knows this. Despite that, emotions often overwhelm rational and realistic thought, especially if the casualties are from friendly fire.

So far, as morning dawned on the first day of the ground incursion, there were no surprises coming out of the Gaza Strip, and that's a good thing for the mission. What is needed is a slow, cautious and determined operation, in which terrorists are taken out. This is what is happening now and one can only hope it will continue in to be so.