Gaza health officials said at least 15 people were killed and as many as 200 wounded when IDF tank shells on Thursday hit a compound housing a United Nations school in the northern Gaza town of Beit Hanoun, during clashes with Palestinian terrorists.

The UN said the strike occurred as staff members were trying to arrange a humanitarian pause in the hostilities so they could evacuate the civilians from the compound in the northern town of Beit Hanoun.

The Israeli military said it was reviewing the incident and suggested Hamas rockets may have been to blame.

"We can't confirm that this is a result of errant fire. In any case, we do not target UN facilities," military spokesman Lt. Col. Peter Lerner said. Lerner said the military had urged the UN and the Red Cross to evacuate the school for three days leading up to the incident.

The UN said it was trying to do just that when the school was hit. Agency spokesman Chris Gunness said the UN had asked the Israeli military for a lull in fighting to allow for the school's evacuation but did not hear back.

Kamel al-Kafarne, who was in the school, said that the UN was putting people on buses when three tank shells hit.

"We were about to get out of the school, then they hit the school. They kept on shelling it," he said.

UN Secretary-General Ban Ki-moon said UN staff were among the casualties and demanded that Israel and Hamas abide by international humanitarian law, respect "the sanctity of civilian life, the inviolability of UN premises" and protect humanitarian workers. He said more than 100,000 Gazans have sought refuge in UNRWA facilities.

"Today's attack underscores the imperative for the killing to stop – and to stop now," Ban said during a visit to Iraq.

State Department spokeswoman Jen Psaki said Thursday's attack on the UN.school "underscores the need to end the violence and to achieve a sustainable cease-fire and enduring resolution to the crisis in Gaza as soon as possible."

"We call on all parties to protect these facilities from the conflict and we have condemn those responsible for hiding weapons in United Nations facilities in Gaza," Psaki added.

Pools of blood soiled the school courtyard, amid scattered books and belongings. There was a large scorch mark in the courtyard marking the place where one of the tank shells hit.

The strike occurred during a day of heavy fighting throughout the coastal territory as Israel pressed ahead with its operation to halt rocket fire from Gaza and destroy a sophisticated network of cross-border tunnels used in terror attacks.

The IDF initially said it was looking into the incident, but later said rockets launched by Hamas had landed in the Beit Hanoun area during fighting with its forces, and that those rockets may be responsible for the deaths. 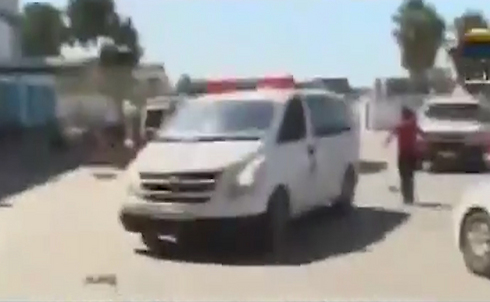 Evacuating the wounded from the UN school

Gaza health official Ashraf al-Kidra said the dead and wounded in the school compound were among hundreds of people seeking shelter from heavy fighting in the area.

The director of a local hospital said various medical centers around Beit Hanoun were receiving the wounded. At least 150 people have been wounded.

"Such a massacre requires more than one hospital to deal with it," said Ayman Hamdan, director of the Beit Hanoun hospital.

According to reports, some of the IDF's shells hit the school's yard, where Palestinians who feld strikes in the northern Gaza Strip were staying.

The Palestinian Red Crescent and a spokesman for UNRWA, the Palestinian refugee agency, confirmed the incident, saying there were casualties and dozens of wounded.

More than 140,000 Palestinians have fled 17 days of fighting between Israel and Gaza terrorists, many of them seeking refuge in buildings run by the UN UNWRA agency.

Thursday's incident was the fourth time a UN facility has been hit in fighting between Israel and Palestinian terrorists in Gaza, which is ruled by the Islamic militant group Hamas.

UNRWA has said it has found militant rockets inside two vacant schools.