Palestinian sources said Friday that Israel had told the UN's that the 72-hour ceasefire was officially over, prompting the UN to urge Palestinian parties to reaffirm their commitment to a truce. Sources close to Gaza factions also said Cairo ceasefire talks planned for Friday have been postponed until further notice.

UN Special Coordinator Robert Serry said an incident in the Rafah area of the Gaza Strip, in which two Israeli soldiers were wounded and a number of Palestinians were reportedly killed, would if corroborated constitute a serious violation of the ceasefire by Gazan militant factions.

Serry "urges the Palestinian parties to last night's understanding to urgently reaffirm their commitment to the humanitarian ceasefire" a statement said.

A source in the Islamic Jihad said Friday that Egypt had contacted the organization after Israel informed Cairo of the possible kidnapping of an IDF soldier. The Egyptians reportedly told the source that the discussions that were planned to take place in Cairo have been suspended until further notice. 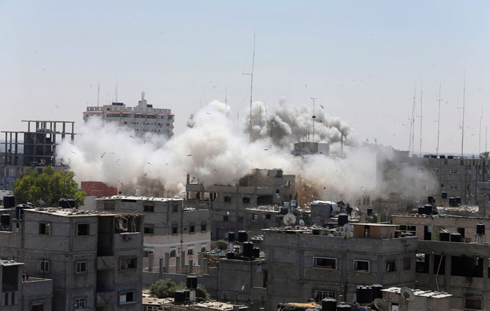 A source in the Prime Minister's Office told Ynet that Hamas first broke the truce, and said it was another example of how Hamas breaks its commitments, this time before the UN and US who brokered the deal.

According to the Palestinian source, Maj. Gen. Yoav Mordechai passed on the message to Serry's office where he was notified.

Israel told the Egyptians that the 72-hour ceasefire that went into effect on Friday morning was off, a report in Lebanon based Al Mayadeen claimed amid mutual allegations by both Israel and Gaza terror factions that each had breached the ceasefire, however, it could not be confirmed independently.

The report in Al Mayadeen further added that Egypt has said it will not accept the Israeli delegation to ceasefire talks.

The IDF also said on Friday that a Gaza ceasefire that went into effect earlier on Friday is now over and military operations were in progress on the ground.

Asked during a media conference call if the ceasefire was over, Lieutenant-Colonel Peter Lerner, a military spokesman, said: "Yes. We are continuing our activities on the ground."

His comments followed reports that 40 Palestinians had been killed by Israeli shelling and Israel had accused Gaza militants of violating the US- and U.N.-brokered truce by firing rockets and mortars.

The 72-hour break announced in a joint statement by US Secretary of State John Kerry and UN Secretary-General Ban Ki-moon was the most ambitious attempt so far to end more than three weeks of fighting, and followed mounting international alarm over a rising Palestinian civilian death toll.

The ceasefire was to be followed by Israeli-Palestinian negotiations in Cairo on a longer-term solution.

A member of the Palestinian Authority Executive Committee, Bassam AL-Salahi, who is supposed to take part in ceasefire talks in Cairo, said Friday that the visit of the Palestinian envoy has been postponed, "Due to the escalation from the Israelis."

In a conversation with Turkish media, he asserted that the visit would take place Saturday. This information comes after Egypt reportedly refused to receive the Israeli and Palestinian envoys on Friday due to renewed fighting.

The lull was seemingly first broken by terror factions in Gaza who fired a mortar at Israel at roughly 10 am Friday morning. The mortar, which was followed by another shortly after, failed to land in Israel, falling in Gaza territory.

An official in Prime Minister Benjamin Netanyahu's office said Hamas and other armed groups in the Gaza Strip had "flagrantly violated the ceasefire". But the official did say whether or not he was referring to the 10am mortar fire.

Senior Hamas official Moussa Abu Marzouk commented on clashes between the IDF and Gaza terrorists, which began roughly two hours after a joint US and UN ceasefire came into effect.

"This is what we expected from an enemy that never stands by its commitments," he said.

"We are committed to ceasefire as long as the occupation (Israel) is committed," said the official who was supposed to take part in Cairo talks for a long-term ceasefire.

"We will not negotiate in Cairo about disarming. We will only talk about a ceasefire and lifting the blockade on Gaza."

An IDF spokesman said a heavy exchange of fire had erupted in the Rafah area, without providing further details.

Hamas spokesperson Mushir Al-Masri said that "The next few hours will decide where things will go and all the options are open."

According to him, "Our rockets are aimed at Israel if the calm is broken."

International diplomats hope that the 72 hours will be long enough to get the talks started, but not long enough to draw a rejection from any side that might have opposed a longer-term truce proposal. Even so, there's no guarantee that the truce will hold once the 72 hours are up, on Monday morning in the Mideast.

The US also has proposed a rolling set of short-term cease-fire agreements to keep the negotiations going, but it's not clear that the parties will agree to that.

"We hope that this moment of opportunity will be grabbed by the parties, but no one can force them to do that, obviously," Kerry said in New Delhi, in the darkest part of the night.

"So we come at it with sober reflection about the lives lost and the violence suffered," Kerry said.

"There's been too much of it for most people's judgment here, and our hope is that reason could possibly prevail to find the road forward," he said.

A senior State Department official travelling with Kerry in India said US Deputy Secretary of State Bill Burns would arrive in Cairo on Saturday and that Frank Lowenstein, the acting U.S envoy for Middle East peace, and another US official, Jonathan Schwartz, would be there on Friday.

The official said he believed the Palestinians would be in Cairo on Friday, while the Israelis would arrive on Saturday.

The Palestinian delegation will be comprised of Hamas, Western-backed Fatah, the Islamic Jihad militant group and a number of smaller factions, Palestinian officials said.

But US officials said Israel and the United States would not sit across the table from Hamas, which the two countries, along with the European Union, consider a terrorist group.

Just over an hour before the ceasefire was due to take effect militants fired 11 rockets into Israel, one of which was intercepted by the Iron Dome defence system over the centre of the country, a military spokeswoman said.