From ISIS to Hamas, the smart way to fight terror

Both organizations draw their power from the support of the local population; bettering the conditions of the people on the street can be a game-changer.

Terrorist organizations have an irritating habit - even after being routed, they declare victory and behave in negotiations to end the fighting as though they are the ones dictating the terms and act like they are performing a kindness to the other side by even agreeing to a ceasefire.

This approach stems from the fact that guerrilla and non-state terrorist organizations do not need to defeat the national armies in asymmetric warfare. It is enough for terrorists to be able to disappear into the population after they have taken a severe beating, and appear once more when convenient for them.

This is how it happens all over the world in the asymmetric wars that have come to characterize the 21st century. This was the case for the Americans in Iraq and Afghanistan, for Israel in Lebanon, and in dozens of other cases. So, there is no need to get excited about this irritating negotiating tactic of Hamas. Israel cannot let irritation interfere with the ability to see the facts, even if they are unpleasant.

Fact one: Hamas planned well, with talent and creativity in the current round of fighting. It took advantage of all the benefits given to it by clear knowledge of the territory, as well as gifts from its Iranian and Qatari sponsors. (The Iranian well dried up a few years ago, but until then everything Hamas had, including knowledge of rocket and bomb manufacturing came from Iran and North Korea). Hamas initiated the current round not only because it was in political and economic distress, but also because it was properly prepared.

Fact two: Substantial sections of the chain of command in Hamas and its Special Forces have displayed strong motivation and noteworthy engagement in battle. And they had more than motivation - they also had a clear mission to emerge from tunnels in fighting mode, kidnap an Israeli soldier and quickly vanish. They tried to complete this task with remarkable determination, but, to Israel's relief, did not succeed. The tunnels were not designed for stealing bodies. 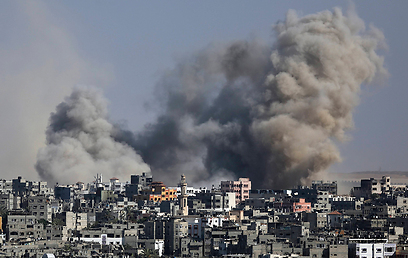 Smoke rising over Gaza after an IAF strike (Photo: AP)

These two facts point to Israel facing a changed enemy. Sadly, one must admit that Hamas has demonstrated fighting ability and spirit to match that Hezbollah during the Second Lebanon War. But rather than acknowledge these unpleasant facts, Israel keeps fighting the wars of the past, blaming and criticizing the IDF. Granted, there were errors and omissions in the IDF performance, but these were exceptions, and as a rule the army played its part, demonstrating professionalism and dedication to its mission, in ways unseen in both the Second Lebanon War and Operation Cast Lead. The truth is that Hamas sustained a fatal blow, from which it will find it hard to recover. So no one need be impressed by their leaders' current showy proclamations.

The tendency to blame ourselves stops us from seeing something else too: the dire conditions in Gaza, the economic distress of a population living on charity and the fact that it is actually one enormous detention camp are the reasons why Hamas found it simple to recruit diggers for its tunnels and fighters for its military wing. Hamas was able to direct the public's anger at Israel, even though Israel is not to blame for the situation. The closure on the Gaza Strip, which is the cause of so much of the suffering of the population, is intended to prevent a Hamas military buildup that would then be used to kill Israeli civilians. Israel was only defending itself, but Hamas was able to make it the guilty party and transform the Palestinian public in Gaza into the source of its own power.

One thing Hamas and the "Islamic State" in Syria and Iraq have in common is the fact that that neither organization could succeed in battle or recruit fighters without the strong support of the local population. In the case of ISIS, this is the Sunni tribes of western Iraq, abused by the Shiite government of Nouri al-Maliki in Baghdad. In the case of Hamas, it is the desperate Gazan population that gives them support.

The conclusion is clear: Improving the situation of the local population is necessary, but not enough, to defeat the guerrillas and terrorists. In this context it should be noted that since the Arab Revolt of 2011, the Arab street has power and influence over its rulers that it did not have before. Therefore, a vital step in successfully fighting ISIS is for the Iraqi government to give Sunnis a fair share of power and prosperity. Gaza requires a dramatic improvement in the economic situation and free movement of the population. Again, this is necessary, but not enough. Hamas has to be fought and significantly weakened. It is impossible to destroy it altogether, even if Israel kills all its leaders one by one. Just as Hamas recovered after Ahmed Yassin and Abdel Aziz Rantisi were killed in 2004, just as the Jihadists recovered after Abu Musab al-Zarqawi was killed in Iraq in 2006, so these organizations would recover again. Even if Israel occupied the whole of the Gaza Strip and carried out arrests and Shin Bet interrogations every night for years, after it left, if no other effective administration appeared in its stead, the situation would return to as before. This is the curse of asymmetric war, where the terrorists are guerrillas supported by the non-combatant population, and therefore can operate uninterrupted from within. A conflict of interest has to be created between the military wing of Hamas and the Gazan population that is under the organization's control.

Furthermore, Israel has to prevent a military buildup and the reconstruction of the Hamas fighting force, and the conditions for this are now better than ever before. The greatest achievement of Operation Protective Edge to date is Israel's strategic cooperation with Egypt. This partnership allows us to almost hermetically seal the Gaza borders to prevent heavy weapons and other munitions from being smuggled in to the Strip.

The deployment of Palestinian Authority security forces in Gaza will only serve to reinforce this reality. But it is of paramount importance that the cement, iron, pipes and fertilizer sent into the Gaza Strip are not used as raw materials to line new terrorist tunnels or for rocket production. This can be achieved by dispatching international monitors, preferably European, to each of the Gaza reconstruction projects.

And if all of these measures are unsuccessful, it may be possible in the next phase to strip Gaza of its heavy weaponry in return for Israeli to approval for the construction of a seaport and an airport. But this can only happen within the framework of a political settlement under the auspices of the Arab states. And in any case it would take many years, during which Hamas would have strong motivation to preserve the calm.

As such, Israel should be making every effort in the negotiations currently taking place in Cairo. There is no need to be impressed by Hamas' rather pathetic demonstrations of power. There is no shame in maintaining a cool pragmatism. Even so, whining and giving in to the desire to humiliate the other side would not only stymie a long-term truce, it would shorten it too.

And for anyone in need of an example: The humiliation of surrender agreements forced on Germany at the end of World War I led to World War II, initiated by a Hitler-led Germany to avenge the humiliation. But after World War II, the Allies implemented the Marshall Plan, initiated and led by the United States, to rehabilitate Germany. We are all familiar with the results.

The same thing could happen in Gaza too. If Israel acts calmly and intelligently and with the international community, and instead of seeking to blame the Palestinians, ensures that the Gazans can live in dignity and that Hamas does not keep its heavy weapons. It is possible, just as was the removal of the chemical weapons in Syria.