IDF destroys homes of killers of three teens in Hebron

Soldiers pelted with stones and firebombs during overnight demolition operation, but none were hurt; destruction of homes done after Supreme Court rejected three appeals against it; kidnappers remain at large.

The troops also destroyed the home of Hossam Kawasmeh, who is accused of assisting Eisha and Marwan Kawasmeh. Hossam Kawasmeh was arrested in July south-east of Ramallah in a Special Forces operation that was aided by the Shin Bet. 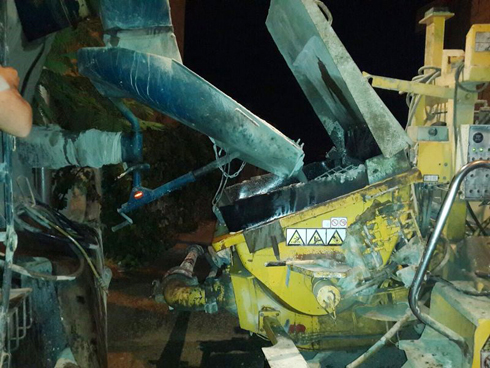 While they were working, the soldiers were pelted with stones and Molotov cocktails. The troops used crowd dispersal means. None of the troops were hurt.

The IDF said the demolition work was done in accordance with the decisions of GOC Central Command, Maj.-Gen. Nitzan Alon, after the Supreme Court rejected three appeals against the demolition.

Shortly after midnight, 250 Border Police troops from the Judea and Samaria Division, along with dozens of Engineering Corps troops and other units that blew up, destroyed and sealed the homes. 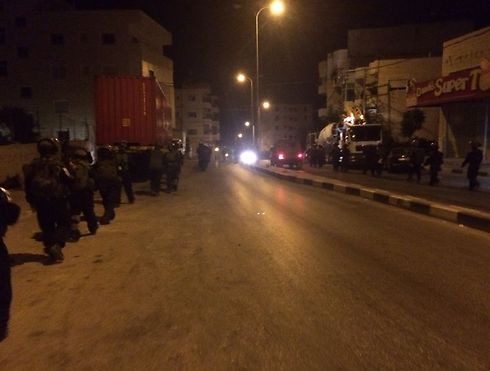 Troops in Hebron overnight (Photo: Police Spokesman's Unit)
"We got to the homes at the same time and after closing in on them and ruling out the presence of explosives, we started the demolition in accordance with the Supreme Court's ruling," an officer from the Judea and Samaria Division's operations directorate said.

"Throughout the entire time we made sure to minimize harm to uninvolved (civilians) and completing the mission in the best way possible." 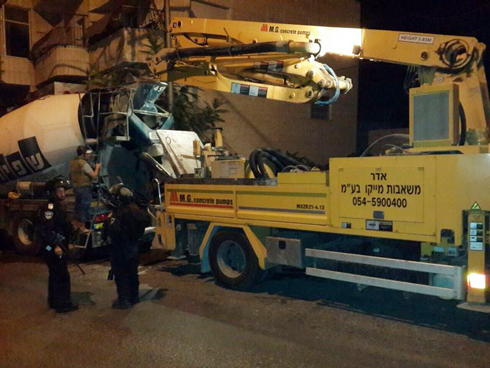 Sealing the terrorists' homes.
The Border Police commander in the Judea and Samaria Division, Brig.-Gen. Uzi Levi, said that "the destruction of the terrorists' home is meant as a deterring and serious message to the terrorists and their partners in crime that there is a price that they would pay if they choose to continue terror activity and harming innocent people. We will continue acting determinedly against anyone who was involved in terrorist activity against the citizens of the state of Israel." The IDF said "the security forces continue in their efforts to find the kidnappers. The IDF will continue taking any legal means at its disposal to hurt the terrorists and those who aid them, and deter them from committing additional attacks."