Israel's leaders are considering the fallout of the operation.
Photo: Ministry of Defense

The end of the operation: Hamas blinked first

No one should be deceived by the rather ostentatious displays of victory on the streets of Gaza, but Israel must be firm in its demands, and its leader should take a good hard look at their own behavior over the past 50 days.

In Jerusalem and the Defense Ministry's Kirya compound in Tel Aviv they are rubbing their hands in satisfaction - and quite rightly so. After a short-lived war of attrition of just one week, even without a fresh ground incursion, Hamas blinked first and agreed to the outline of the initial ceasefire proposed the Egyptians - the outline of which it had received before Israel sent its ground troops in weeks ago. Hamas has not even received the "minor agreement" it could have secured eight days ago, before it violated the ceasefire the last time. Israel, however, has not ceded on anything, rather simply agreed to the ceasefire approved by the Cabinet back in mid-July, a few days after the start of Operation Protective Edge. Even so, I can honestly say that I still do not know if we won or drew against the terrorist organization that initiated this war. Granted, the organization is badly wounded, has had all of its military capabilities taken away and more than a thousand of its fighters lost their lives, but Israel also lost 68 people, most of them soldiers. And yet, there is no satisfactory answer that will ensure the safety of the border communities against mortars, short-range rockets and even anti-tank missiles that could be fired on a bus carrying children to school in the Eshkol Regional Council or the Negev. 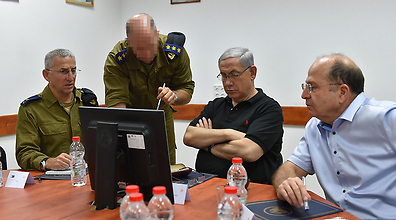 Israel's leaders now face a political dilemma: did we win or draw? (Photo: Defense Ministry)
The indefinite ceasefire that took effect Tuesday evening is a tactical win that, for the moment, does not guarantee long-term, stable calm for the Western Negev communities or the whole of Israel. It was indeed Hamas who sought the ceasefire, even pleaded for it, but the organization is known to be a serial violator of ceasefires, and the need to hurt and shed the blood of the Israelis has often overcome its survival instinct and concern for the Palestinians under its control. The Egyptian and Israeli governments did well by demanding a relatively long ceasefire of at least a month before even beginning to discuss Hamas' demands and Israel's counter-demands. Even when the negotiations do begin, we should be prepared for Hamas trying to pressure us to accept its demands by renewing its attacks. Therefore, instead of calling this a "permanent ceasefire", it is more appropriate to call it a "conditional ceasefire". In this regard, it is important to point out that in addition to the ceasefire that began Tuesday evening, the United States is moving ahead with a Security Council resolution that would anchor the ceasefire in international law and also mention Israel's demilitarization requirements. This process, initiated by the US and the European Union within the framework of the Security Council, serves to reinforce the deal reached by the Egyptians, Hamas and Israel. It is fair to assume that the Egyptians promised Hamas that the Rafah crossing will be opened as soon as possible, which will give Hamas an incentive to uphold the ceasefire, even if its Qatar-based political leader Khaled Mashal does try to drag it back into a resumption of fire. But Hamas will be interested in maintaining the ceasefire primarily because of the need to rebuild the Gaza Strip from the terrible rubble that remains. One must admit that the Air Force operations of the last eight days and the achievements of Israel's intelligence officials in eradicating Hamas' military wing prevent the need for Israel to send its ground troops back into Gaza to impose a ceasefire while Hamas fell apart, something that would have proven to be very costly indeed. Another question that Israel will have to address is what to do if and when Hamas or one of the other Gazan factions violates the ceasefire – either by digging a tunnel, manufacturing rockets or planting explosives near the Gaza perimeter fence. If Israel does not respond firmly and decisively to even the slightest breach from this point on, it will lose the deterrence it has achieved in this operation. There would be no point to anything that the Air Force, ground troops and navy have achieved if Israel were to show restraint in the face of any breaches. Hence, the true test of the ceasefire declared Tuesday evening will not just be whether Hamas, Islamic Jihad and/or the Popular Resistance Committees violate it, but how Israel responds to that first violation. Israel did not respond to violations either after the disengagement in 2005 or following its withdrawal from Lebanon in 2000, and as a result had to wage war a few years later, under more difficult conditions. A similar situation now should be avoided at all costs.

The next test of the ceasefire will be the details of the agreement that the parties will begin to discuss next month. In fact, Israel has several demands of its own: Security arrangements to prevent attacks on the fence, mortar fire and the creation of new tunnels, and stopping Hamas from regrouping. This latter issue has actually already been recently resolved, with the Egyptians destroying the smuggling tunnels in Rafah, and Israel overseeing the humanitarian aid delivered to Gaza via the border crossings.

In the future, when the Rafah crossing is opened, Mahmoud Abbas' inspectors will ensure that weapons and munitions are not transferred from Egypt to Gaza. The question is whether the major agreement will include close inspection of the cement, building materials, pipes and fertilizers brought in to rebuild the economy and demolished buildings of the Gaza Strip so that they are not used to rebuild the tunnels. At this stage, this will be managed by the United Nations and the European inspectors for construction projects in the Strip. A more serious international monitoring mechanism will have to be devised at some point in the future. As far as Hamas' humanitarian demands go, Israel has no problem in accepting them immediately. This is, of course, provided that materials transferred to ease the suffering of the population, deal with the water shortages and meet the housing needs of those whose homes were destroyed are not used to strengthen Hamas.

In terms of the rehabilitation of Gaza, Israel has a simple equation: Gaza reconstruction for the demilitarization of heavy weapons - rockets, mortars, anti-tank and anti-aircraft missiles and UAVs. Demilitarization should also include the dismantling of facilities used to produce the rockets. For despite what has been said, Israel's demand for demilitarization is not off the table.

But as stated, the tough negotiations over the agreement will take many months and their success will largely determine whether there is a long-term truce or not. Israel has a vested interest in rehabilitating the Strip, even if it takes a decade, as the citizens of Gaza and Hamas would then have something to lose. Hamas has already previously announced that it has agreed in principle to a 40-year hudna (armistice) with Israel. It stipulated, however, that Israel must withdraw to the 1967 borders. It is fair to assume that if Gaza is rehabilitated, and the population does have something to lose, even Hamas will keep the hudna - at least for three to five years. A hudna, of course, is more stable than a tahadiyeh (period of calm), and this is what Israel must strive for -without giving up its demand for demilitarization. If the Security Council passes a resolution in the coming days that mentions the demilitarization of Gaza, that would be a real boost to Israel. One can say, in conclusion, that the operation apparently did achieve its objectives. We do not know yet whether the ceasefire will hold, but if it does, then the operation will definitely have fulfilled its goals. Hamas is militarily and politically weakened, its tunnels destroyed, its rocket production system has suffered a fatal blow - and no one should be impressed by the showy celebrations on the streets of Gaza. But Israel must take a careful look at itself - especially the government. If the Cabinet had previously ordered the IDF to enter and destroy the tunnels, which they knew about before June 2014, we might have had far fewer casualties and a shorter operation. The Cabinet had not taken into account, although they knew about it, the greatest threat posed yet to the border communities nor taken steps to evacuate them. The defense minister, prime minister and chief of staff made a mistake by not ordering the evacuation of children and anyone not required for the essential maintenance of those communities. The Israeli government evacuated communities during and after the War of Independence, and there was no reason why little Daniel Tregerman had die so tragically from shrapnel wounds. The outrageous behavior of members of the Cabinet and the mutual exchanges of verbal fire between Benjamin Netanyahu and his ministers severely hampered Israel's deterrence capabilities, possibly unnecessarily extended the war and even caused a sense of lack of purpose as they gnawed away at our national strength and bolstered Hamas' desire to keep going. The campaign is not over, it has just moved to the political, diplomatic and international judiciary arenas. With that in mind, it is still too early to declare mission accomplished, and we may well only be praising the outcome of Operation Protective Edge years down the line.