The Safot V’Tarbuyot (languages and culture in Hebrew) school in Beit Shemesh did not open its gates for the first day of the 2014 school year due to a fierce dispute between the city's secular and ultra-Orthodox populations.

The Education Ministry, together with parents of secular pupils, decided not to open the school for the start of the academic year in protest of the municipality's announced intention to allocate a wing in the school for the use of female Orthodox students.

Meanwhile, the Education Ministry has announced that it intends to issue a closure order of the haredi wing in the Safot V’Tarbuyot school after it had become clear that the municipality planned to open it without notifying the relevant sources.

The Education Ministry said in a statement that haredi wing is illegal and that they strongly oppose what they termed as "underhanded opportunism" on the part of the local authority.

"Their conduct is one-sided and blatant. We intend to make use of all possible means at our disposal to deal with this issue," the statement issued by the office said.

The municipality said that it had requested empty classrooms in the school be used by female ultra-Orthodox students from the Mishkenot Daat school who live in the neighborhood.

On Sunday night, a contractor hired by the municipality arrived at the Safot V’Tarbuyot school to put up barriers between the classrooms. Parents of the school's students arrived at the school as well in order to voice their objection to the move.

Shortly after, a violent clash ensued between the parents and the security guards who accompanied the contractor. Police forces were deployed to the school grounds, and Magen David Adom paramedics gave medical treatment to one of the mothers who was wounded during the conflict. 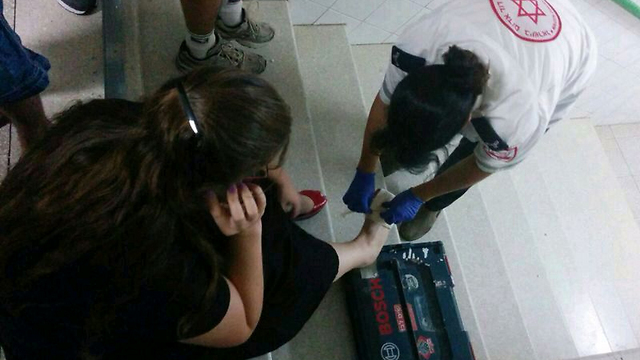 Police detained one parent after he spray-painted the words "separation fence" and "shame to Zionism", causing damage to the fence that was put up in the school yard.

According to the parents, the municipality is seeking to transform the school's secular identity to one that is ultra-orthodox in nature; they dedicated music and art rooms for the use of the haredi students, as part of a larger plan to change the basic make-up of the institution.

The Beit Shemesh parents' representatives, backed by the Education Ministry, claimed that the decision to cancel the first day of school was in response to Haredi Beit Shemesh Mayor Moshe Abutbul's one-sided agenda to harm the public school system.

Yossi Hadad, vice chairman of the school's parents association said that "this is a decision that splits the school in two and adds in the Haredi denomination while putting up barriers simultaneously."

He added: "This process began four days ago, before the school year started, with no meetings conducted and no organized agenda. The municipality wants to the school to be Haredi in nature and scare away the secular population."

"The municipality has summoned the school principal to discuss the subject in order to reach an agreement, but when she opted not to attend the meetings, the municipality was left with no choice. It's a shame that people with hidden agendas choose to inflame the atmosphere rather than act responsibly."