US will lead war on ISIS from the front

Analysis: Obama's strategy against jihadist organization includes airstrikes, aiding Kurdish militia and Iraqi army forces on the ground, collecting intelligence on ISIS, cutting it off from its financial sources and forming coalition with Arab states.

The United States and Britain have finally come up with a strategy to curb ISIS and are now beginning to implement it. They already have a basic coalition, the balance in Iraq is already being tilted against ISIS, but the road is still long. The formulated strategy is aimed at destroying ISIS – no less – by operating on six different channels:
No Strategy?
ISIS poses an impossible dilemma for Obama
Alon Pinkas
Analysis: Can a strategy even be devised against a stateless, borderless or shapeless element?
ISIS poses an impossible dilemma for Obama
1. Forming an international coalition, which would provide an umbrella of legitimization under international law for fighting ISIS on the ground, and which will make it possible to divide the economic burden such fighting entails. US President Barack Obama is following in the footsteps of President George H.W. Bush, who formed an international coalition in 1991 for a war against Saddam Hussein, and following the Libya precedent in 2011. In Libya, the US "led the coalition from behind" and bombed Muammar Gaddafi's forces from the air, while the rebels waged a war against him on the ground. But the most important thing at the time was that the Europeans joined the coalition and even carried out most bombardments. 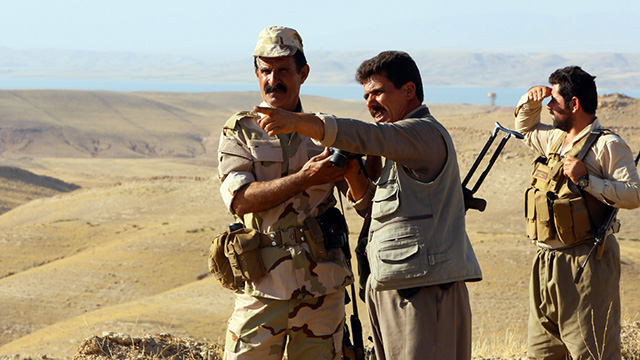 In the war against ISIS, the US has apparently decided to lead the forces from the front rather than from behind, like it did in Libya, both in the international arena and in the fighting against ISIS on the ground. This is already good news, although the European coalition which fought Gaddafi with American logistic and intelligence assistance did a good job.

2. After forming an international coalition providing legitimization to the fighting against ISIS under international law, the next stage is the fighting on the ground and the assignment of tasks and division of the economic burden it entails.

Most of the fighting will be carried out from the air, using warplanes which will bomb ISIS concentrations, the permanent facilities set up by the jihadists in Syria and Iraq and the long convoys of pickup trucks of ISIS fighters traveling on the roads towards their destinations.

Another key element in the aerial war is the remote-piloted vehicles used by the Americans and their Western allies to hit major targets such as leaders and commanders' gatherings. This is what the US does when it fights al-Qaeda, these days too.

The fighting from the air against an exposed terror and guerilla organization has proved to be very efficient both in Libya and in Afghanistan, at least in the stage before these organizations assimilate into the population and the cannot be bombed.

This is now true in regards to ISIS. In 2003, I saw the American armed forces operating in the same way against units of Saddam Hussein's army in the Mosul area.

I was escorting American forces operating in northern Iraq against the Kurdish militia, the Pêşmerge. The fighting was simple at the time – the Pêşmerge led the American Special Forces which parachuted in northern Iraq towards convenient post overlooking Saddam Hussein's Iraqi army concentrations.

F-14 warplanes, which took off from Sixth Fleet ships in the Mediterranean, approached the area and members of the Special Forces marked the targets for them using laser. We then clearly saw the bombs sliding from the planes towards the Iraqi soldiers, who fled with panic. 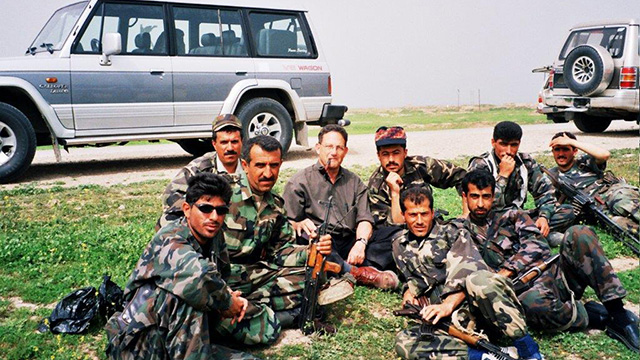 Ron Ben-Yishai with Pêşmerge fighters in 2003 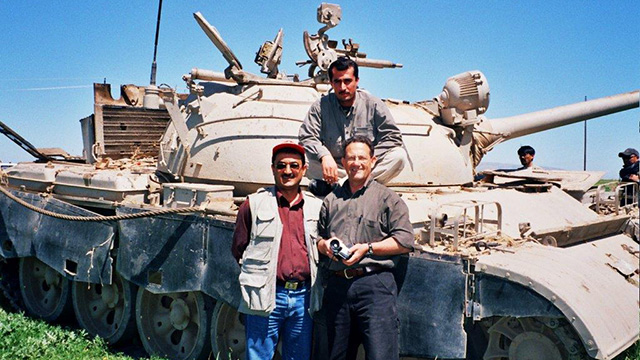 When the bombing ended, the Kurdish Pêşmerge got up, brushed the dust off their clothes and approached Mosul together with the American Special Forces.

That's how we crossed the Euphrates River and entered Kirkuk and Mosul, with the process repeating itself frequently: The planes bomb, Saddam Hussein's soldiers take off their uniform, get into "civilian" clothes and escape, and the Pêşmerge advance together with the American Special Forces and the fighters of an American paratroopers unit and take over the occupied territories.

This is more or less what is happening now in the Mosul area, but on a much smaller scale.

In 2003, by the way, while the Americans were invading Iraq, a heavy disaster took place. An American F-14 jet, likely due to bad weather conditions, bombed a convoy we were in which was advancing in the footsteps of the fleeing Iraqi army. Dozens of Pêşmerge members were hurt, as well as several British journalists from the BBC. But in general, this method worked, and it is apparently also working now.

In order to carry out this kind of fighting against ISIS, it's not enough to cooperate with the fighting Kurds. Ad hoc local alliances must also be created with fighting militias wherever ISIS is. I am mainly talking about alliances with the Iraqi army or what is left of it, with Shiite militias in Iraq, with the Free Syrian Army and with other groups of rebels which do not belong to the radical Islam in Syria. 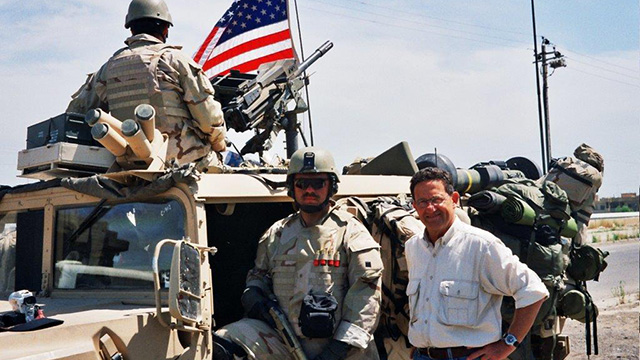 Ron Ben-Yishai with the American forces in Mosul in 2003

We won't have to wait long before these forces are trained and stock up on weapons. A small number of British, American, Canadian and Australian special forces can get the job done if they receive assistance in navigation, transport and intelligence from the local militias. That's what happened, for example, in the Turkmen town of Amirli, which is located in the eastern side of the Turkish enclave in northern Iraq.

The Turkmens bravely defended their town, and then the aid arrived – the Americans bombed from the air, the Shiite militias trained by the Iraqi government attacked on the ground, and Amirli's Turkmens, who are also Shiite, were relieved as ISIS ran for its life. This pattern of operation will succeed if it is carried out extensively and if the fighting on the ground is backed by other means. The occupation of Amirli was the turning point in the fighting in Iraq, and over the weekend ISIS has also lost several villages it took over during the summer. 3. The third channel is cutting off the ISIS members, who are radical Sunni Muslims, from the Sunni population they are operating from within in the Ar-Raqqah area in Syria and in the Anbar province in western Iraq. Without the help of Sunni tribe leaders and former members of Saddam Hussein's regime, the Baath party members, ISIS would not have succeeded in taking over such wide areas. Pickup-truck convoys with a heavy machine gun installed in their trunk and fighters waving Kalashnikovs standing on them is not enough – there is also a need for a tactic, a strategy and fighting methods, and these were supplied by former members of Saddam Hussein's army who teamed up with ISIS, particularly members of a group called Naqshbandi. The Sunnis are helping ISIS because the Shiite-controlled Iraqi government has turned its back on them and discriminated against them, both politically and economically. This trend must be reversed, and the Americans have already started doing so by bringing about the ouster of Shiite Prime Minister Nouri al-Maliki from the Baghdad government.

Similar action must be taken in Syria by aiding the moderate Sunni forces operating against President Bashar Assad. The operation in Iraq is relatively easy for the Americans and the newly established coalition, as the Iraqi government invited them to operate there. In Syria it will be harder for the Americans to bomb without getting the approval of Assad's army, although the American bombings and the activity of their special forces could help Assad survive.

This problem, however, can likely be overcome in creative ways through aerial activity from Iraq and Turkey, where the Americans have bases from which they can operate, as well as quite a few friends. Recently, the Syrian army has been bombing the Ar-Raqqah area, ISIS's capital, with growing efficiency. Western intelligence sources estimate that the intelligence information about ISIS is being transferred to the Syrian regime through non-Israeli Middle Eastern sources, and perhaps even by German sources. 4. In addition, ISIS must be cut off from its financial sources – particularly the Syrian oil which it has already started selling and the oilfields it has taken over in the Ar-Raqqah area – as well as from the funds it receives from countries like Qatar and private elements in Saudi Arabia. Without money, ISIS will quickly shrink into several thousand fighters and will not be able to pay the Sunni tribe leaders in Iraq and Syria for their support. 5. The international coalition must include Arab states which most of ISIS' foreign recruits come from. Tunisia, Algeria, Jordan, Saudi Arabia must all be included by the US in the coalition in order to prevent the flow of new recruits to ISIS and the transfer of funds to the organization. US Secretary of State John Kerry is embarking on a tour of the region in order to recruit the Arab states whose participation in such a coalition is highly important, not only because the moderate Arab regimes are afraid of ISIS, but also because they are the ones who can disconnect the nipples ISIS is sucking on ideologically, logistically and financially. 6. The international coalition is very important in another area – collecting intelligence on ISIS and its abilities. We are talking about both intelligence on the ground and information about its donors in Europe and in Arab states and about its leadership. On the whole, ISIS isn't more dangerous than al-Qaeda. It is another global jihad mutation which can and must be hit, and at least narrowed down to tolerable dimensions. Israel can only hold an indirect role in this coalition, mainly by supplying weapons, technology and information to the different forces which are fighting ISIS in Iraq and Syria. There is no need for us to get involved, but we are capable of offering quite a lot of aid to Jordan, Egypt and other elements if they seek our help. The Americans will have to decide whether they wish to receive help from Iran too – and pay a price for it.