Inside the raid on teens' killers

Full details: It took months of work, but Israel finally tracked down the two terrorists who abducted and murdered the three Israeli teenagers in the West Bank in June.

At 1 am Tuesday, a special police force encircled a house in one of Hebron's northern neighborhoods. It was a two-story building. The top floor was street-high and the bottom floor was under the road at the slope of the hill.

The building, which consisted of stores, is located not far from the Al-Ahli Hospital, about a kilometer south of Road 35, where most of the traffic flows from the Kiryat Gat area to Mount Hebron. 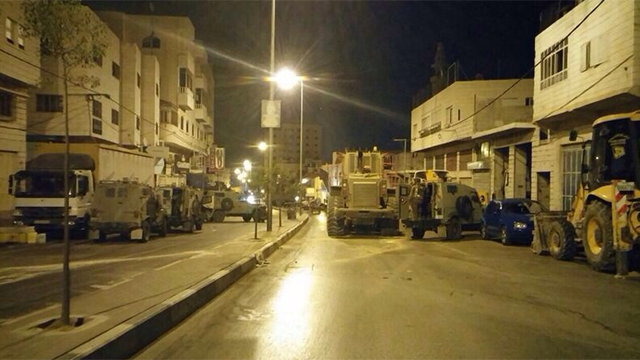 The two murderers were hiding in a carpentry shop at the bottom floor under the road. The force from the elite YAMAM unit opened fire at the walls of the bottom floor and called on the terrorists to come out. There was no response. IDF forces secured the operation in the wider circles and detained several wanted men in the area who are believed to have helped the terrorists with food supplies, warnings of security forces' presence, etc. The Shin Bet provided the intelligence for the operation and during the operation.

When the two terrorists failed to respond, the forces' commander in the area – in full agreement with the Yamam commander – decided to proceed in a way which would not endanger the forces raiding the building. Judea and Samaria Division Commander Brigadier General Tamir Yаdai ordered the forces to bring over a large bulldozer, which razed the upper floor of stores.

The information provided by the Shin Bet was that the terrorists were at the bottom floor of the building. They had arrived at this hiding place only several days earlier. In the months that have passed since the teens' murder, they had been moving from one hiding place to another, with the help of members of the Kawasmeh family, which is considered one of the most respectable families in Hebron. Most of its members are affiliated with Hamas, including Hossam Kawasmeh, the commander of the cell and the mastermind of the teens' abduction, who was arrested several weeks ago. 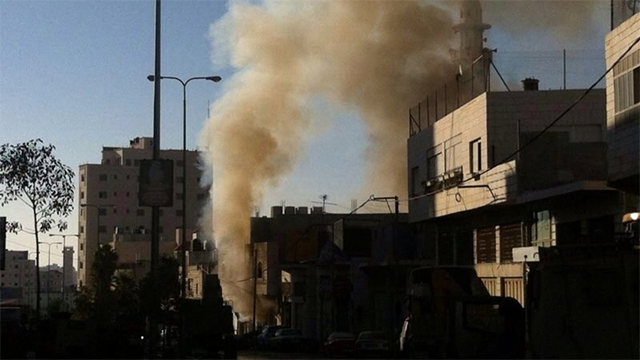 The bulldozer created a hole in the bottom floor's ceiling, trapping the terrorists. The Yamam officers, who were not interested in a hand-to-hand fight with the terrorists on the same level, tried to establish contact with them from the top floor after they did not respond to the call to surrender.

The Yamam and IDF forces encircled the house from all directions, but they did not have to wait much longer. They saw one of the terrorists' head emerging from a hole as he began firing from a rifle in his hand. It was at dawn, and the forces were unable to detect in the darkness which of the two terrorists it was. They fired several shots at once, and the terrorist was hit and fell back into the hole. According to the force's commander, he was probably killed on the spot.

During the operation in search of the murderers, the IDF – under the Shin Bet's guidance – had arrested dozens of people suspected of being involved or aiding them. It slowly became clear that the Kawasmeh family was providing the terrorists with a hiding place or helping them move from one hiding place to another, as well as supplying their needs.

The "golden piece of information" which led the forces to the hiding place had reached the Shin Bet in the past week, but it was decided not to rush before making sure that these were indeed the murderers. Therefore, some of their accomplices were only arrested Monday night during the operation in the building the terrorists were hiding in.

It likely took the Shin Bet and IDF a long time to locate the two murderers due to the fact that they had relied on the "closed circle" of their extended family members, who hid information about the murderers during Shin Bet interrogations because of their blood relation to the murderers and the cell's commander.

Although the kidnapping and the murder were a local Hebron initiative, the entire Kawasmeh family helped hide the murderers in a bid to find a way for them to escape later on. Their destination was probably Jordan. That is why the operation took so long. But eventually, after strenuous work, the Shin Bet managed to put together the network of accomplices who led the forces to the murderers.