Fatah, Hamas reach agreement settling recent rift: Hamas government employees in Gaza will be paid, and the management of the border crossing will be handed over to the unity government.

Rival Palestinian factions Hamas and Fatah reached an agreement on Thursday by which the unity government run by President Mahmoud Abbas would take "immediate control" of the Gaza Strip, negotiators in Egypt-mediated reconciliation talks told reporters.

"Fatah and Hamas have reached a comprehensive agreement for the return of the unity government to the Gaza Strip," Jibril Rajoub, a member of the Fatah delegation in Cairo, told AFP.

The information was confirmed by Azzam Al-Ahmad, the head of the Fatah delegation and Moussa Abu Marzouk, a senior Hamas official based in Cairo. 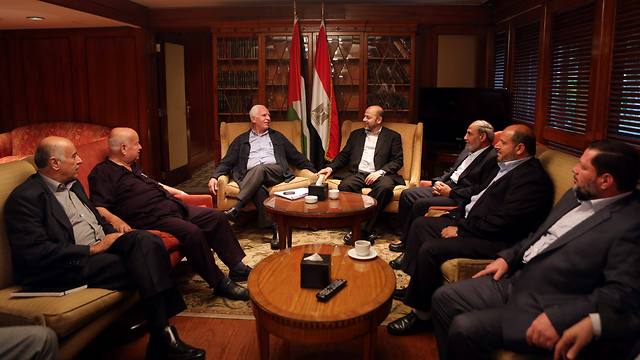 Negotiations in Cairo over implementation of unity government (Photo: EPA)

The Gaza ceasefire struck in August between Israel and the Palestinians included stipulations that the Palestinian Authority, led by Abbas, should take over civil administration in Gaza from Hamas.

The Palestinian rivals had set up a unity government of independents in June but are at loggerheads again, with Palestinian President Mahmoud Abbas threatening to end the administration and accusing Hamas of running a "parallel government" as de facto ruler in the Gaza Strip.

Hamas, on its part, accused the Palestinian Authority of not paying salaries to Gaza's 45,000 public sector workers.

Azzam al-Ahmed, an aide to Palestinian President Mahmoud Abbas, said Hamas, Fatah and other Palestinian factions have now formed a committee to look into a number of pressing issues in Gaza, including the salary question. "The national committee will be able to sort this out," he said.

Ahmed said the two factions had agreed on "eliminating all the obstacles before the national unity government".

Moussa Abu Marzouk, chairman of Hamas' political bureau, said control of Gaza's border crossings, another contentious issue, would lie with the United Nations in addition to the unity government.

"The United Nations will come to an agreement with Israel and the unity government on how to run the crossings," Marzouk said.

The agreement states that 3,000 members of the security forces employed by the Palestinian Authority will be merged into Gaza's security services and tasked with running the territory's border crossings.

Marzouk said the Rafah border crossing with Egypt was not part of the deal.

Marzouk also said this week's meetings yielded broad agreement on creating mechanisms to permit the import of construction materials into Gaza to let rebuilding efforts go ahead. With thousands of housing units and other buildings destroyed during the war, reconstruction is a key priority for all Palestinians.

But concerned that building materials like cement and some metals could be used by Hamas to manufacture weapons, Israel has demanded clear-cut safeguards against the materials' diversion from foreign governments and international organizations involved in the reconstruction process.

Abu Marzouk appeared to be sensitive to this concern.

"What we did now is facilitating ... and providing all mechanisms to help donors, and give them assurances about the process from the beginning to the end," he said.

An unidentified Hamas official told the Associated Press, however, that the agreement reached between the two factions was only partial, and did not address for ex-Hamas employees and control over the coastal territory's security forces.

The official did not provide details of the partial deal and spoke on condition of anonymity because he was not authorized to discuss with media the negotiations between rival Palestinian factions that are under way in Cairo. Other figures in Hamas and Fatah provided only vague accounts of the accord. 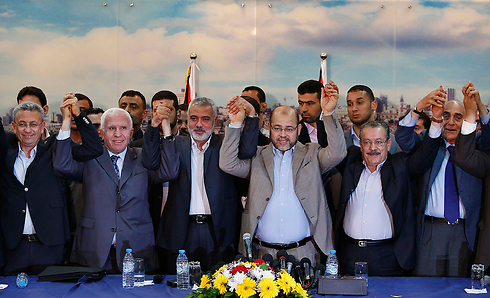 The two-day talks, which began Wednesday, come after a joint Palestinian delegation and Israel agreed to hold separate indirect talks in late October to thrash out a lasting truce after this summer's 50-day Gaza war between Hamas and Israel.

The talks between the two sides were crucial for internal Palestinian divisions to be set aside and to agree on a unified strategy during talks with Israeli negotiators in October.

The talks between the warring factions was also crucial for the reconstruction of the Gaza Strip, that suffered great devastation in the war with Israel. The Palestinian Authority said in a study reconstruction work would cost $7.8 billion, two and a half times Gaza's gross domestic product.

International concerns about Hamas' inclusion in the unity government could undermine a donors' conference intended to raise reconstruction funds for Gaza, which Egypt is set to host on October 12.

Under Egyptian mediation, Israel and the Palestinians agreed on August 26 to a cease-fire that ended Operation Protective Edge between Hamas and Israeli forces.

The conflict ended with an agreement to hold future talks on Palestinian demands to end an eight-year blockade of Gaza and exchange prisoners in Israeli jails for the remains of Israeli soldiers killed in Gaza.

Ahmed also said on Thursday Palestinians would seek membership in UN organisations including the international criminal court "to enable our people to hold Israel accountable for the war crimes it has committed".