The only way to placate the Palestinians

Netanyahu is agitating for a Madrid-style regional conference, but its failure would be guaranteed from the start; meanwhile, Obama is looking for a way to ease tensions on the Palestinian front.

It was clear that the Palestinian cause would not take center stage during Wednesday night's meeting between Barack Obama and Benjamin Netanyahu. The White House allocated the prime minister 75 minutes, and even with an extension, the two had a great deal of ground to cover, and little area of agreement. Netanyahu wants the US to avoid a "bad agreement" in the nuclear talks with Iran and also made a stab at clearing the bad air in the relationship between the two administrations.

The two leaders may be in agreement on continued intelligence sharing and peacekeeping operations to combat radical Islam and Islamic State in Iraq and Syria, but the American president will not give up on the Palestinian issue. Not only because he is committed to ideological and political efforts to achieve a permanent settlement to the conflict, but primarily because the United States urgently needs calm on the Palestinian front.

Netanyahu and Abbas at the White House (Photo: Reuters)

The United States must prove to its allies in the Arab world and Europe that it is not the enemy of all of Islam, only its most extreme and brutal form. Even a superpower like the United States needs international and regional legitimacy as, alongside the moderate Arabs and Europeans, it is bombarding the Islamic State in Iraq and arming rebels in Syria. The last thing Obama wants is to veto a Security Council resolution proposed by Mahmoud Abbas that seeks to end Israel's occupation of Palestinian territory within three years.

In short, the United States must now pay the price for having the "moderate" Arab states fight at its side against the Islamic State – and the currency is the Israeli-Palestinian conflict.

The same thing happened to then-president George H.W. Bush during the first Gulf War in 1991. Israel's prime minister at the time, Yitzhak Shamir, was willing to cooperate with the Americans. Shamir wanted Saddam Hussein eliminated, and did not wish to disturb the American and Arab-European coalition built to do so.

Shamir paid twice over for this service: once when Israel refrained from responding to the Iraqi Scuds that rained down upon it, and a second time when he was forced into the Madrid Conference, initiated by Bush Sr. to find a solution to the Israeli-Palestinian conflict. The conference was held with the participation of the Arab countries and Palestinian leader Yasser Arafat (represented by Jordan), but in the end nothing came of it except long speeches and a non-binding summary statement. 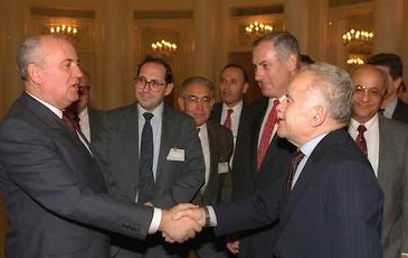 Shamir and Netanyahu at the Madrid Conference of 1991 (Photo: GPO)

This is exactly what Netanyahu is offering today, 23 years later, as a substitute for direct negotiations with the Palestinians. How ironic. But a two-state solution is not an option for Israel right now - during Operation Protective Edge, Hamas again more than demonstrated what the Palestinians are capable of doing with territory evacuated by Israel.

Netanyahu will probably raise with Obama the initiative for "a regional political horizon", with the idea of utilizing the intersection of interests with Saudi Arabia, the Gulf states, Egypt and Jordan to come to an agreement on the Palestinian issue.

On the basis of this idea, Tzipi Livni, Yair Lapid and their respective camps are pushing for Netanyahu to pull together regional consensus, either or without a conference, in which an agreement will be formulated, based on the Arab Peace Initiative. At a late date several years down the line - when the wave of radical Islam has subsided, or the Palestinians or Israelis or both have had a change in leadership, or another violent event occurs - details of direct Israeli negotiations with the Palestinians will be finalized.

But the "political horizon" is for now a mere mirage. Even if a regional conference is held in the next six months, there is little doubt that the moderate Arab states will present a rigid position that closely adheres to the tenets of the Arab initiative. The Arab leaders will feel the need to prove to their citizens, and Muslims in general, that they are fighting brutal radical Islam but remain unreservedly loyal to Muslim issues in general.

So they will not budge one iota on their demands for Palestinian sovereignty in East Jerusalem, exclusive Arab Muslim sovereignty over the Temple Mount, and a return to the 1967 borders. Even if they do not insist on the right of return, the Israeli government and the current formulation of the coalition could never accept even some of the demands of the Arabs. 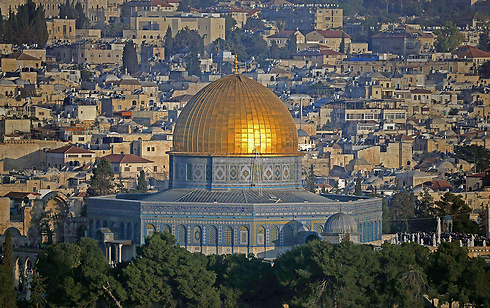 Arab leaders will not budge on demands for exclusive Arab Muslim sovereignty over the Temple Mount (Photo: AFP)
But the Arab leaders will not be able to give up on their demands, in order to avoid being presented as traitors by the Islamic State and al-Qaeda. Therefore, any such regional conference – if it is ever convened – is bound to fail just as the Madrid Conference did. This time, failure as a result of Israel's public refusal to accept the terms would only insult the Arabs, create a bad atmosphere and motivation to settle scores with Israel. Hence, such a suggestion as an alternative to Obama's direct negotiations with the Palestinians is, in the current climate, a recipe for entanglement. It is preferable to give it up and let it die quietly in the meantime.

In fact, there is now only one option that would facilitate calm on the Palestinian front in such a way as to meet the demands of all parties. A long-term interim agreement would allow Israel and the Palestinians, the Americans, the Europeans and the moderate Arab states to spend the next few years without political conflict or military upheaval, until the Middle East stabilizes and the wave of extreme Islam subsides.

Under the terms of such an agreement, Abbas would agree to suspend policy initiatives in the international arena; he would not try to impose economic sanctions on Israel or turn it into a pariah state, nor would be embarrass the Americans who would be forced to come to Israel's diplomatic defense. In return, Israel would officially announce that it was entirely refraining from building new settlements, dismantle unauthorized outposts and freeze housing and public building starts in the established settlement blocs. This would all be effective initially for one year - with an option to extend if the Palestinians met their obligations and maintained security and political calm. Such a move would win Israel much international legitimacy, and serve its internal interests by acting to deter to negative changes in the future demographic equation.

In addition, Israel could contribute to the improvement and rehabilitation of trust between the two sides with the gradual release - through a commutation of sentences - of individual Palestinian prisoners. They would be released at a slow but steady pace, thereby avoiding Palestinian street festivals that show support for terrorists, as has happened in the past with the mass paroles.

These measures would be accompanied by a significant easing of the blockade on Gaza, even including the creation of a sea ingress to Gaza via a supervised wharf (in Cyprus, for example) to which cargo ships would arrive and empty their containers. These containers would then be loaded onto special ships for transfer to a dry dock in Gaza – similar to the system of back-to-back crossings currently employed to prevent the smuggling of weapons and explosives.

Israel would also ease the movement and trade between the West Bank and Gaza, as well as improve the state of infrastructure for the Arab population of East Jerusalem. The United States, moderate Arab states and the Europeans would donate funds, expertise and oversight in order to prevent a military buildup by the terrorist organizations.

All of these would be used as an incentive for Abbas, the West Bank Palestinians, Hamas and the Gazans to maintain the calm and allow the Palestinian Authority to regain some form of control in the Gaza Strip. And once the area became less volatile, then also would also be easier to reach a permanent agreement, under which the Palestinians would fulfill at least some their national aspirations and Israel would receive reasonable security arrangements.