After new Swedish PM sparks diplomatic crisis by saying Sweden will recognize Palestine as a state, new statements rephrase support, saying Palestinian statehood will be recognized after negotiations with Israel.

In a new, more softly worded statement, the embassy said that, Sweden will recognize a Palestinian state at the end of negotiations between Israel and the Palestinians.

"As part of a statement on government policy, (Swedish Prime Minister Stefan Lofven said) that Sweden will recognize the State of Palestine. 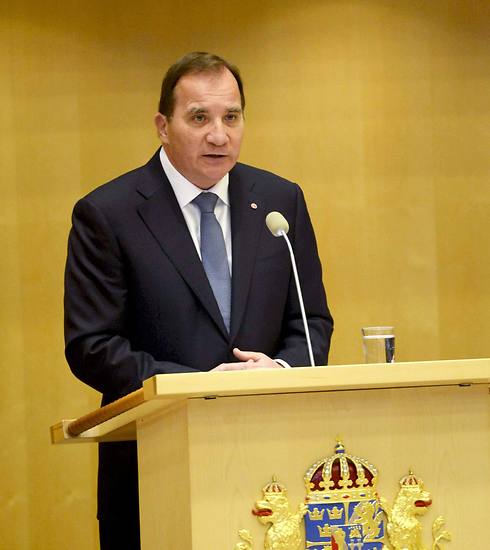 Swedish Prime Minister Stefan Lofven (Photo: Reuters)
"The conflict between Israel and Palestine can only be resolved through a two-state solution… negotiated in accordance with the principles of international law. It must guarantee the legitimate demands of both the Palestinians and the Israelis for national self-determination and security. A two-state solution requires mutual recognition and a will to coexist peacefully. Therefore, Sweden will recognize the State of Palestine," the statement concluded. The refined statement seems to indicate a solid support for Palestinian statehood, but only as part of negotiations with Israel which also take into account Israel concerns and positions.

The comments by Lofven, made during his first day in office, sparked a crisis between the two countires, and even the US weighed in, saying that the move was "premature".

Sweden's ambassador to Israel has been summoned for a reprimand meeting on Monday at the Foreign Ministry in Jerusalem, after Lofven made the announcement.

Foreign Minister Avigdor Lieberman said Saturday night that Lofven's announcement was unfortunate as he "likely has yet to have enough time to delve into matters and understand that the side which has been a spoiler for the past 20 years to advancing an agreement between Israel and the Palestinians – is the Palestinians."

Lieberman said that the "Swedish Prime Minister Lofven needs to understand that no declaration and no step by an outside player can replace the direct negotiations between the sides and a solution that will be part of a comprehensive agreement between Israel and the entire Arab world."

He added: "If the Swedish prime minister's inauguration speech is concerned with the situation in the Middle East, he would be better off focusing on the urgent problems in the area, like the daily mass killings in Syria, Iraq, and other places in the region."

Officials in Jerusalem are concerned by the Swedish declaration for a number of reasons – Sweden is the first major European country, party to the European Union, which has chosen to recognize Palestine as a state.