The defender of the beheaders

Op-ed: Whatever the post-colonialists might claim, the truth is that all Jihad offshoots, from Boko Haram to the Taliban, operate with the same degree of barbarity, with or without Americans or Zionists.

She's Israeli. She's Jewish. She'd really like to write "love 'em!" about the Jihad's beheaders; but "in the storm of the present, it could be construed as cause for arrest."

It certainly is an exasperating present, in which a fascist majority isn't very enamored with the beheaders. And it's getting worse. Islamic State's public defender views the beheadings as a "refreshing form of dialogue," and she'd "really love to make kale for them." Her name is Anat Rimon-Or – a lecturer and teacher. She teaches at colleges. She taught at Beit Berl and also at high schools.

Along the spectrum of opinions in Israeli society, there are ones like these too. Clearly it was going to take a little while before members of the post-colonial cult began to offer up justifications for Islamic State too. It's not very complicated. You copy the standard blah-blah against colonialism – West, Zionism, white man, America, Europe – and the dish is ready. Noam Chomsky and Norman Finkelstein have already made pilgrimages to Hezbollah leader, Hassan Nasrallah. They are, after all, united in the struggle against Israel; thus the road linking madness on the left and the Jihadi madness was paved a long time ago. 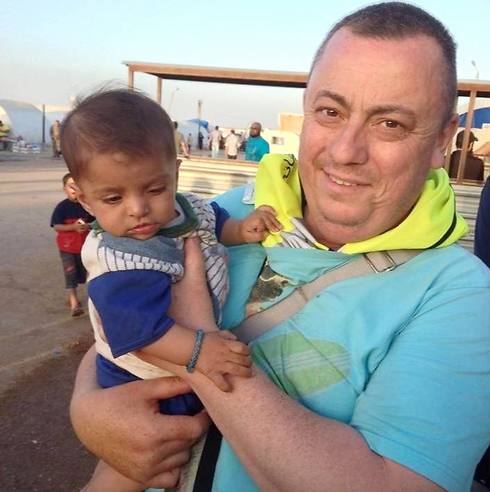 Israel is a democracy. If someone were to claim that this madness is poisoning students, the outcry in support of freedom of speech would shift into high gear. She knows she can do it. After all, any form of criticism of this madness is viewed here as McCarthyism. So what's left to do? We need to make it clear to her students and pupils that a degree of caution is required when listening to her.

To get to the crux of the matter in just a few words: Rimon-Or bases her support for the Islamic State murderers on the claim that they are only responding to the misdeeds of the Americans, who are killing a lot more people with their tools of destruction – and "the more primitive and vulgar means" of the Jihad are nothing compared to that.

Before any of her students adopt this pseudo-sophisticated nonsense, one should remind them that the thousands who are being murdered in the name of Jihad in general, and the Islamic States' victims in particular, are in fact Muslims and Arabs. Only a handful are Westerners. But that's enough for her. Because the postcolonial school of thought is essentially racist.

It absolves "the others" of any responsibility. It rants and raves about the fact that two or three Westerners have been murdered. It turns the Jihad into an entity concerned with protest or the righting of social wrongs. It disregards the mass-murder festival. It ignores the fact that girls and women are being turned into sex slaves.

Whether any of that is of interest to her is doubtful. Rimon-Or, like many of her fellow followers of the same school of thought, is stuck like a scratched record in an anti-colonial model that has long since lost touch with reality. And the truth of the matter is that all the Jihad offshoots, from Boko Haram and through to the Taliban, operate with the same degree of barbarity, with or without Americans or Zionists in the vicinity. The Jihad groups perpetrate massacres against blacks and Muslims after all.

But let's not confuse the followers of this post-colonial school of thought with facts. The fact that the new mass murderers have also beheaded three Westerners is enough to get them to dive in with their theories.

Among other things, Rimon-Or has written a tiresome article under the title, "The Nazi Evil and the State of Israel," which, much to her chagrin, all the newspaper editors refused to publish. But fret not. Islamic State's anti-colonial newspaper will be happy to run it.

How did such a radical phenomenon emerge from within the Israeli academe? Well, it turns out that her doctoral advisor was Adi Ophir, a veteran member of the anti-Zionist school of thought. Thus, it's a good idea to bear in mind, simply bear in mind, that Israeli democracy allows individuals with these viewpoints to teach in the state's educational institutions. Democracy also requires that these viewpoints be exposed in all their folly.

The myth of disproportion

How many civilians and how many combatants were killed in Operation Protective Edge, I asked the Israel Defense Forces' spokesman. Initial assessments indicate at least 900 terrorists, and the review is ongoing. The most in-depth assessment is being conducted these days by a team from the Meir Amit Intelligence and Terrorism Information Center – a fully independent body. The team is checking name by name. It's tedious and complex work. Thus far, they've checked 50 percent of the names. Their interim count shows 51 percent civilians and 49 percent terrorists. The center is known for its trustworthiness. The foreign media, those that aren't obsessed with Israel-bashing, take the center's publications seriously too.

The figures are not final because the list of names released by the Palestinian Health Ministry does not indicate natural mortality numbers during the 50-day operation. According to CIA data, the annual crude death rate in Gaza is 3.09 per 1,000 residents. Taking into account the fact that Gaza is home to some 1.8 million residents, the natural mortality rate thus amounts to around 5,560 people a year, and 760 people during the 50-day operation. Do they appear on a different list? Have they been included in the list of Protective Edge fatalities?

Dr. Reuven Erlich, who heads the Intelligence and Terrorism Information Center, and is also leading the investigation team, prefers not to brand the figures released by the Palestinians as deliberate deception. He's cautious – very cautious. He'd rather err to the detriment of Israel than voice claims he cannot back up. He clarifies, however, that this issue, too, will be probed.

Already apparent, nevertheless, is the fact that in comparison to all other asymmetric conflicts that have taken place in the past decades – Russia v Chechnya, NATO during the war in Kosovo, Sri Lanka against the Tamil Tigers, the United States in the battle for Fallujah – the IDF maintained the lowest proportion of civilian casualties. This won't of course ward off the baseless accusations ranging from "genocide" to "disproportionality," but we cannot abandon the truth. There are many who still want to hear it.

The grave economic crisis in the United States in the 1930s gave way to the New Deal. Congress approved socioeconomic laws designed to cope with the crisis. The Supreme Court rejected some of the laws and undermined the program. Then US president Franklin Roosevelt was furious with the justices. And thus began one of the biggest legislative crises in the history of the United States. The last two rulings handed down by Israel's High Court of Justice on the matter of the illegal immigrants leave the country facing a similar crisis.

How do we deal with it? There's been talk in the Knesset of a legislative move to negate the High Court's authority, primarily with respect to the migration issue. The High Court has indeed trampled the principle of the separation of powers. The High Court has indeed gone too far in its rulings. Nevertheless, it's not worth the effort. Such a move would lead to another campaign and outcry warning of "an end to democracy." And at the end of the day, it won't pass.

What did Roosevelt do? He initiated a bill to increase the number of Supreme Court justices. Because the president is the one to approve the appointments, with the consent of the Senate, he planned to appoint justices who would support the legislation. The threat itself sufficed. One justice changed his tune, the legislation went through, and the legislative crisis came to an end.

In civilized countries, the power to reject laws lies in the hands of a constitutional court, the make-up of which is balanced and representative. In Israel, any judge, even a magistrate's court judge, who graduated from law school six years ago, has the power to abolish a law passed by a two-thirds majority in the Knesset. It's an absurd situation – and one that requires of the Knesset a more serious approach to the intolerable offhanded manner in which the democratic majority is being trampled.

Crises of this kind are clearly not "an end to democracy." To the contrary; dictatorships don't experience such crises, they rear their heads in democracies only. Meanwhile, the justices need to show some self-restraint. And if it's hard for them to do so, they should think about Roosevelt. That would hasten the self-restraint.