Pro-Palestinian activists campaign for recognition of Palestine ahead of British vote
Photo: Reuters

The left against peace

Op-ed: While Labor MKs urged their British counterparts to boycott the vote on recognizing Palestine, there were those in Israel who have sadly fallen for the rhetoric of the radical left - and are only harming the chances for peace.

Palestinian propaganda notched up an important victory this week, with 274 British MPs voting last Monday to back the recognition of Palestinian statehood and just 12 rejecting the motion. It was a symbolic vote because the British government announced beforehand that it would not recognize a Palestinian state at this point in time. What's more interesting is the fact that hundreds of Israelis published appeals to the MPs to vote in favor of Mahmoud Abbas' initiative.

On the face of it, this appears to be a case of common interests. After all, most Israelis are in favor of a solution of separation, and even two states. So where's the problem? Well, the Palestinian move is not aimed at achieving a peace settlement, and the British initiative falls entirely into the realm of hatred and incitement against Israel. It's a move aimed at bypassing any chance of achieving a settlement. 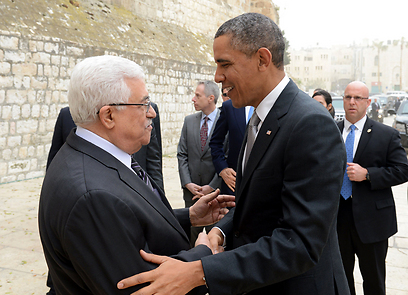 Abbas and Obama: The Palestinian leader is sticking to his standard 'no' (Photo: MCT)

In a New Republic investigative report, journalists Ben Birnbaum and Amir Tibon tell of a meeting at the White House between Abbas and Obama. The US president presented his guests with a draft proposal that includes East Jerusalem as capital of the Palestinian state – but to no avail. Abbas reiterated his standard "no".

In the corridor after the meeting, US National Security Advisor Susan Rice, not known for her affection towards Israel, bumped into Saeb Erekat.

"Susan, I see we’ve yet to succeed in making it clear to you that we Palestinians aren’t stupid," the Palestinian negotiator commented. "You Palestinians,” she replied, "can never see the fucking big picture."

The British parliamentary motion was tabled by Labour MP Grahame Morris, well known for his anti-Israel stance. He promotes a "Free Palestine" agenda in which there is no room for Israel at all. He is also part of the Nazification-of-Israel camp. Demonization doesn't cut it for him. He wants something on a higher level.

There's something sad about the fact that former minister Yossi Sarid and former Foreign Ministry official Alon Liel have slipped into the realms of the radical left in recent years. Sadder still is the fact that they've managed to drag down Nobel laureate Daniel Kahneman and former MK Ran Cohen with them – but not all of the left. To the Labor Party's credit, it must be said, it acted against the anti-Israel move.

Opposition to the settlement enterprise can and should continue. A struggle for separation and a deal and peace and human rights and two states for two peoples can and must be waged. But there's no need whatsoever to bolster Palestinian obduracy or initiatives put forward by Israel haters. That's not the way to bring peace closer; it's the way to distance it.

Who says Europe isn't witnessing protests against the Jihadists' slaughter of innocent people, primarily Muslims? It is in fact. In Turkey, for example, thousands of Kurds demonstrated against the massacre being perpetrated against their people, and against Turkish policy, which is wavering between total apathy and cooperation with Islamic State.

At least 21 Kurds have been killed in demonstrations in Turkey. The next time a Palestinian is wounded while throwing stones or Molotov cocktails, Turkish President Recep Tayyip Erdogan will declare that Israel is committing genocide. In the past, don't forget, he also voiced his support for Sudan President Omar al-Bashir, who is responsible for the genocide in Darfur. 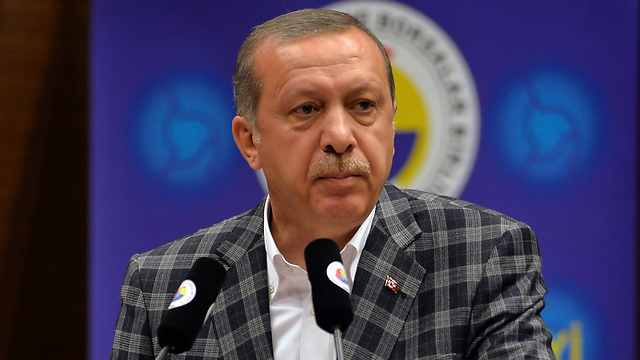 Recep Tayyip Erdogan: Condemns Israel - but not IS (Photo: AP)

Demonstrations have taken place on the other side of Europe too, primarily in Germany. But the demonstrators there were all Kurdish Muslims. Arabs didn't attend. Other Muslims failed to show. Leftists stayed away. But a large number of Muslim supporters of IS – members of a notorious Hamburg mosque, Al-Nur, of the kind that is funded by Saudi Arabia – took to the streets to confront the Kurds.

It's interesting, because Saudi Arabia is playing a double game. On the one hand, it has been the one that has tried in recent weeks to wake the West from its slumber vis-à-vis IS. On the other hand, it has been the one in recent decades that has funded and continues to fund the mosques and imams that drum up Salafist extremism, that encourage the youth of Europe to join IS, and that spur on those who remain to demonstrate their support for the organization.

Not all the Muslims support IS – not by a long shot. But the Muslims who take to the streets to demonstrate do so in the service of IS. The Muslim world hasn't witnessed a single demonstration – not a single one – against those who in the past year have become the Muslims' biggest slaughterers. The Europeans are no different. They actually take to the streets. But never against the Jihad. It's always in support of Hamas, whose official manifesto calls for the destruction of the Jews.